When I heard the SLO Jazz Festival had secured Joshua Redman as its headliner, I could barely believe it. The consummate jazz man and two-time Grammy Award nominee is one of the most dynamic and charismatic jazz performers on the scene, having emerged in the ’90s as one of the young lions of jazz.

In many ways, Redman was groomed for jazz greatness. He’s the son of legendary saxophonist Dewey Redman and dancer Renee Shedroff, who exposed him to a wide variety of music (jazz, classical, rock, soul, Indian, Indonesian, Middle Eastern, African, and more) as well as a wide variety of instruments (recorder, piano, guitar, and gamelan). 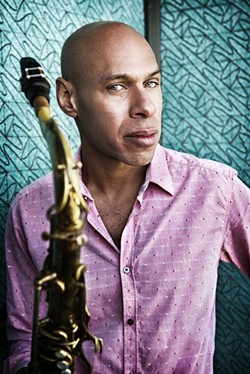 His early work bore the influences of his forebears—John Coltrane, Ornett Coleman, and Cannonball Adderley, not to mention his father and acts such as Aretha Franklin; Prince; The Police; and Earth, Wind, and Fire.

The second annual SLO Jazz Festival returns this Saturday, May 16, in the SLO Mission Plaza from 11 a.m. to 10 p.m., and in addition to Redman, it’s got an awe-inducing lineup of performers: Alfredo Rodriguez and his Cuban piano trio; John Santos and his Latin jazz sextet; vocalist Lavay Smith and her Red Hot Skillet Lickers; and Grammy winner Paul McCandless with his Bay Area jazz trio Charged Particles.

And those are just the main-stage performers. In between, check out this lineup on the Broad Street Stage: Boogie Stomp!; Wally Schnalle and Bang; Human Nation; and Choro De Ouro, showcasing their unique Brazilian style of choro music.

I’ve seen Tony Bennett twice now, once in the SLOPAC and last year at Vina Robles Amphitheatre, where he returns again this Saturday, May 16, for a concert that includes his daughter Antonia Bennett (7:30 p.m.; tickets at vinaroblesamphitheatre.com). The man is a class act, impeccably dressed, charming as hell, and most importantly still has a voice as distinctive and extraordinary as ever.

What a life and career this man has had, from his Queens, N.Y., upbringing to his stint as an infantryman in the waning days of World War II to his ’50s and ’60s singing career, to his painting career as he waited out the rock era, and then his comebacks in the ’80s and ’90s. Since then, he’s never been without work, having become a national treasure with a total of 18 Grammy Awards (including a Lifetime Achievement Award back in 2001) to his credit.

And the songs? “I Left My Heart in San Francisco,” “Rags to Riches,” “The Shadow of Your Smile,” “Stranger in Paradise,” “Because of You,” “The Good Life,” “The Best is yet to Come,” “Smile,” “Blue Velvet,” “In the Middle of an Island”—he’s got a million of ’em! Tony Bennett is 88 years old and still going strong. If you’ve never seen the man perform live, don’t miss it!

Do the ‘Lido Shuffle’

I guess you could say Boz Scaggs peaked in 1975 with the release of Silk Degrees, the album that yielded songs such as Grammy winner “Lowdown,” “Lido Shuffle,” “What Can I Say,” and “We’re All Alone,” but that’d be ignoring a rich and amazing 40-plus-year career that started with fellow musician Steve Miller during his prep school days in Texas (the two later attended the University of Wisconsin-Madison together, where they played in bands called The Ardells and the Fabulous Knight Trains) and has enjoyed one resurgence after another. 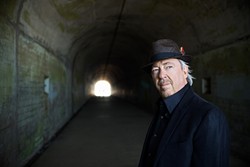 His 2013 album Memphis reached No. 17 on the US charts, and he recently released A Fool to Care this year, which, by my calculations, is his 18th studio album. This is a performer still rich in talent and creativity.

Sure, he’s taken breaks over the years. In 1988, he opened San Francisco’s famed nightclub Slam’s. But he’s also involved himself in big collaborations, for instance from 1989 through 1992 when he was part of The New York Rock Review with Donald Fagen, Phoebe Snow, Michael McDonald, and others.

Space was too tight to list all the great shows this week, so be sure to check New Times’ online calendar as well as slobrewingco.com for upcoming Good Medicine Presents shows such as Royal Jelly Jive on Thursday, May 14; The Swingin’ Utters on Sunday, May 17; and Fortunate Youth on Wednesday, May 20.

This Thursday, May 14, Cal Poly music faculty member and percussionist John Astaire and guest vocalist Inga Swearingen will present a concert I expect to be amazing and beautiful. Astaire will accompany Swearingen on a cimbalom—a Hungarian hammered dulcimer—and they’ll perform a song cycle called “Dear I of That Day: Remembered Songs of a Distant World,” which features songs by Schubert, The Beach Boys, Merle Haggard, and others: “songs separated by time or genre but linked by mood and memory,” according to the performers. The concert starts at 7:30 p.m. in Room 218 in the Davidson Music Center (Building 45) on campus. Tickets are $5 at the door. And speaking of  Swearingen, she’ll also perform with bluesman and guitar shredder Guy Budd during a benefit show this Sunday, May 17, at 2 p.m. an outdoor house concert. The cost is $25 per person and proceeds go to Celebrate Los Osos. Tickets and details are at www.bigbigslo.com/inga. The pair will present songs in “quasi-pastoral themes,” as well as a mix of folk, funk, rock, and soulful, bluesy jazz. Dorian Michael will open the show.

Vina Robles Amphitheatre hosts a really big locals show this Sunday, May 17, with Moonshiner Collective, Girls & Boys, Captain Nasty, Zongo All-Stars, and The Kicks (1 p.m.; $20 tickets at vinaroblesamphitheatre.com). Samba Loca will perform between sets. Come out and check out this incredible venue, which will clear the pit in front of the stage for dancing!