Joshua Tree National Park is a draw for artists

It’s Wednesday, Dec. 31—the last day of 2014—and there’s snow blanketing the otherworldly landscape of Joshua Tree National Park. Snow here is a pretty rare occurrence, maybe once or twice a year, and it makes the area’s alien landscape even weirder.

It’s easy to understand why Joshua Tree has been a magnet for artists and musicians. Bleak yet soulful, there’s something very still and peaceful about the place, with majestic rock formations and the queer tree from which the park takes its name. 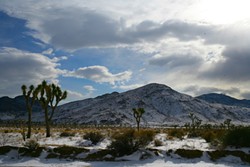 The common name “Joshua Tree” was given to the Yucca brevifolia by a band of Mormons who crossed the Mojave Desert in the mid-19th century, having reminded them of the biblical story of Joshua reaching his hands to the heavens in prayer.

More than a quarter century ago, U2 named its wildly popular album after the area. Before that, it was a place of inspiration for everyone from The Eagles to Eric Burdon (Animals, War), from John Lennon to Jim Morrison, and from Victoria Williams to Donovan, who so strongly felt the pull of the area that he relocated his family there in the ’70s, living an “alternative” lifestyle.

The area is also inseparable from its lore as a drug-fueled mind-expanding area. Friends Gram Parsons and Keith Richards spend considerable time there, and Parsons (The Byrds and Flying Burrito Brothers) famously died there on Sept. 19, 1973, succumbing to an overdose of morphine and tequila in Room 8 of The Joshua Tree Inn. Book early, friends. The waiting list to get into Room 8 is frequently long. 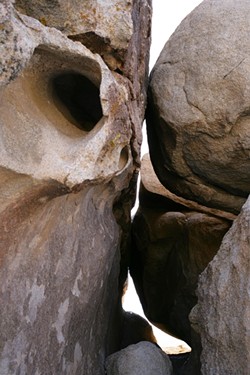 It helps Parsons’ legend, of course, that his roadie Phil Kaufman stole his coffin from LAX (it was on its way to be buried in New Orleans) and drove it to Joshua Tree and attempted to cremate him there. Apparently there was a fireball but not enough sustained heat to consume the body. I didn’t find it, but there’s supposedly a marker commemorating the spot at Cap Rock where the act took place. Kaufman was fined $750 for stealing the coffin but not the body.

Today, the wind is whipping the dry, powdery snow through the desert, and the crunch of my boots through the snow reminds me of my Midwestern youth. There are a lot of places to pull off the road and hike out into the park toward mountains of rock, many precariously balanced. Low brush can pierce through jeans driving nettles into unwary shins. Snakes, frequently active in spring and summer, aren’t a worry today, and I can imagine Jim Morrison, high on peyote, wandering through this landscape murmuring about the lizard king.

I can also imagine The Eagles coming up with the lyric “I’d like to sleep with you in the desert tonight” from the Joshua tree-inspired song “Peaceful Easy Feelin’.” It’s a storied landscape that continues to draw visitors year after year. 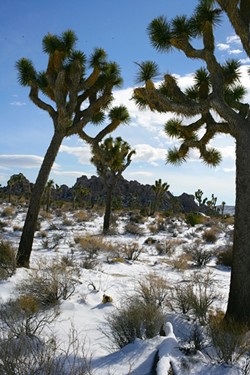 This is my first trip to Joshua Tree, but it won’t be my last. Somewhere out here among the strange trees, dramatic rock formations, and lingering spirits, there’s the inspiration for a novel.

Joshua Tree National Park—(760) 367-5500—is located where the Mojave and Colorado Deserts meet near 29 Palms and Palm Springs. A day pass to enter the park is $15 per vehicle. Camping is also available.