The San Luis Obispo County courthouse was busy as usual on the morning of Jan. 28, bustling with suit-clad lawyers, worried defendants, and courthouse employees, all rushing off to somewhere. Amid the commotion, a group of about eight men and women stood outside the Department 6 courtroom just after 11:30 a.m., wiping away tears, hugging, and shaking hands. 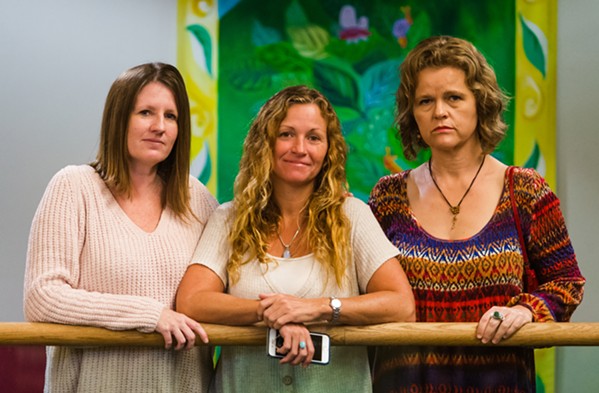 Josiah Johnstone—an Atascadero native accused of stalking, harassing, and abusing roughly 30 men and women—was convicted of a felony count of stalking and felony criminal threats on Jan. 28 and sentenced to serve four years and eight months in state prison.

Tanya Walker, one of two women included in the criminal case against Johnstone, wrote in a statement to New Times that while she doesn't think Johnstone's sentence is long enough, she's relieved he'll be spending at least some time in prison and that the arduous court process is over.

"It has been nearly three years since I first pressed charges against Josiah Johnstone," Walker wrote in the statement. "I had no idea when I made the call for help that there were so many victims that came before me. I am grateful today that I had the strength and voice to stand up against him."

Johnstone's sentencing has been a long time coming, Walker said.

"Justice was long overdue," she wrote to New Times. "Many of us have lived in fear for several years now."

Johnstone was initially arrested in September 2017 and posted bail in November of that year. On May 28, 2019, Johnstone pleaded no contest to the two felony charges he's now convicted of. After Johnstone failed to appear at his initial sentencing hearings in July of 2019, a judge issued a warrant for his arrest. A bounty hunter found Johnstone in Nevada, where local law enforcement arrested him and brought him back to SLO.

Another hearing on Oct. 17, 2019, ended in disappointment for Johnstone's victims, when Judge Hernaldo Baltodano put off sentencing again and instead ordered Johnstone to participate in a 90-day mental health evaluation through the California Department of Corrections and Rehabilitation (CDCR).

The evaluation, Baltodano said in court on Oct. 17, 2019, would help determine whether Johnstone should serve prison time or if he should be released on probation. In court on Jan. 28, Baltodano said the results were in, and the CDCR recommended Johnstone's imprisonment.

Although there were only two women officially involved in the case against Johnstone, Baltodano said roughly eight other individuals provided the court with victim impact statements regarding the alleged harassment and abuse they suffered at the hands of the defendant. Given those stories, the increasing severity of Johnstone's issues with intimate partner violence, and his "limited insight into how his conduct impacted the two victims in this case," as indicated by CDCR's mental health evaluation, Baltodano said on Jan. 28 he could not let Johnstone out on probation.

Once Johnstone is released, he'll be on parole for three years and required to stay away from the victims in the case and their families for 10 years.

Still, many of Johnstone's victims, including those not involved in the criminal case, say that's not enough.

Shaana Keller, who says she was harassed by Johnstone briefly several years ago, said that because of a California state law that gives prisoners convicted of nonviolent felonies "half-time credits," Johnstone will very likely only be required to serve half his sentence. So while he was sentenced to four years and eight months in prison, he will only be required to actually serve two years and four months.

Johnstone also has about 200 days of credit for time already served, so his time spent in prison will most likely amount to just less than two years.

Sarah Berkey, who claims she was stalked by Johnstone for nearly a decade, said knowing he'll only be in prison for two years has been difficult to process.

"I don't understand it," she told New Times, "but I do know that justice was not served today." Δ