New Times was founded on the premise that journalism and reporting is important to the community, which is why we’ve established the Stephen Donnellan Moss Memorial Scholarship Fund in Journalism, which beginning next year will be available to Cal Poly journalism students. 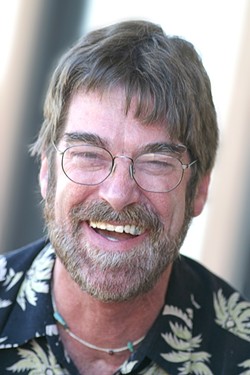 New Times founder Steve Moss was a journalist’s journalist—intellectually curious, open-minded to a fault, with a deep love of argumentative discourse. He was always up for a discussion, happy to argue the opposing view on any subject. It’s not that he didn’t hold strong opinions of his own—he did—it’s just that he was a big proponent of intellectual exercise. It’s something he constantly practiced himself and a skill he encouraged and fomented in his writers.

Steve believed that newspapers and the people who produce them are essential to a healthy democracy, a view shared by his fellow Irish Catholic John F. Kennedy, our 35th president, who famously said, “There is a terrific disadvantage in not having the abrasive quality of the press applied to you daily. Even though we never like it, and even though we wish they didn’t write it, and even though we disapprove, there isn’t any doubt that we could not do the job at all in a free society without a very, very active press.”

Steve loved to be that “abrasive quality,” and as New Times publisher he mentored a generation of journalists who have managed to rub plenty of people the wrong way ... which is to say the right way, according to President Kennedy.

Developing young reporters is why here at New Times we’ve opened intern positions to local Cal Poly journalism students to give them firsthand experience in the day-to-day operations of a newspaper, and why we’re now offering through the SLO County Community Foundation (SLOCCF) this new scholarship, which should begin dispersing funds in 2010.

SLOCCF was established in 1998, and has, according to Executive Director Barry VanderKelen, “grown to be a leader in philanthropy in the county, focusing on the needs of people in the county, and it has become one of largest providers of scholarships in the county. We make grants and provide limited support services to nonprofits, help people give money away in a strategic and appropriate way. We’re delighted to have the Stephen Donnellan Moss Memorial Scholarship Fund in Journalism.”

Applicants must meet eligibility guidelines for the SLOCCF general student aid program and submit a completed application with all the required materials by the appropriate deadline. This general information is available online at www.sloccf.org, under Scholarships & Grants. Applicants must also be current full-time Cal Poly journalism students who have demonstrated commitment to journalism beyond academic achievement and to the SLO County community. They should also demonstrate a financial need (the College Board EFC calculator to determine need is also available on the website) and describe their career intentions in essay format.

The scholarship will be administered by SLOCCF’s Board of Directors via SLOCCF’s Scholarship Committee, and a Cal Poly journalism professor will serve as an ex-officio member of the committee to advise on journalism specifics. Applications will be accepted beginning in spring of 2010 and funds will be awarded for the fall 2010 quarter. The annual scholarship winner will receive approximately $1,500 (or multiple winners a minimum of $500 each).

Though New Times has seeded the Stephen Donnellan Moss Memorial Scholarship Fund in Journalism with more than $10,000, we’re hoping that New Times readers like you also care enough about continuing Steve’s legacy of encouraging and developing young writers to donate to this fund as well. You can make checks payable to SLOCCF (write “Steve Moss Scholarship” in the memo line) and mail them to SLOCCF, P.O. Box 1580, SLO, CA 93406.

Glen Starkey credits his prickly demeanor to constantly arguing with Steve Moss. Pick your fight with Starkey at gstarkey@newtimesslo.com.