His reaction was immediate and visceral. The first time Dale Evers stepped onto San Luis Obispo County soil, he knew he wanted it to be the last place he ever stepped.

Evers, who had recently finished his service in the Army, decided to visit the Central Coast on the advice of a surfing buddy from Hawaii. Little did he know then it would be the place where his art career bloomed. 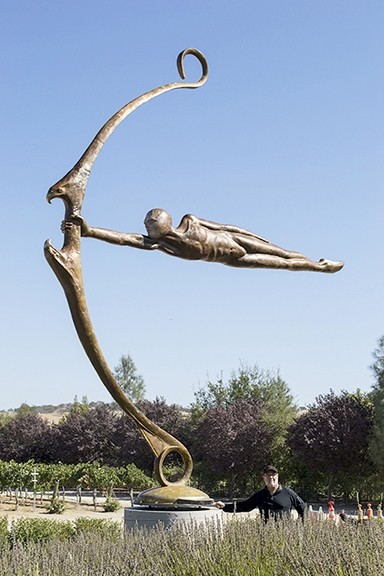 "I came to San Luis Obispo and fell in love," Evers said. "Right away I knew I wanted to die here."

Evers studied at Cuesta College for a time, and then Cal Poly, finally wrapping up his degree down south at San Diego State University. To put himself through school, Evers started making and selling whales carved from wood, a skill he learned as a child. He bounced back to the Central Coast and ended up focusing on art in an old barn in Cayucos, specializing in sculpting and fabricating pieces from materials like bronze, granite, glass, and steel. He grew tired of being known as the "whale guy" so he started focusing on bugs and became known as "the dragonfly guy." About four years ago Evers was named artist-in-residence at Sculpterra Winery in Paso Robles, a location known for its large and beautiful sculptures. Thanks to the installation of a now signature piece there, Evers became known next as "the archer guy."

Mega Focus is a 24-foot-tall bronze sculpture that features an androgynous human looking forward, holding onto a bow with one hand. The person is horizontal, almost as if he/she is the arrow about to be launched. The piece marks a shift in Evers' work from categorical to narrative.

"Although I did good marine art, I think people looked at it and thought, 'It's just marine art, there's no sophistication,' and there's really not," Evers said. "People wanted to buy it because it's iconic work, but there's no message there, it's not story art."

Evers said that the person in Mega Focus represents the transcendent self, or the person that lives inside us.

"It's like when a kid gets stuck under a car and a woman lifts it off her baby," Evers said. "That's the supernatural element that we have within us if we tap it somehow."

Another focus of Evers' is functional art, such as beautifully crafted tables, gates, and lamps. A recent commission from a client is a bronze octopus lamp with glass orbs. He now works from a studio in downtown Paso Robles and also spends several months out of the year working in Guadalajara, Mexico. After 35 years of honing his craft on the Central Coast, Evers is still itching to do more.

Ryah Cooley's sign is Sagittarius, aka the archer at rcooley@newtimesslo.com.