Journey to the Southern Land

An environmentalist and photographer brings Antarctica to SLO

Looking at the images in Sebastian Copeland’s book Antarctica: The Global Warning—released internationally in the fall of 2007—the immediate response is not an exclamation or declaration, but a question: Who knew that ice had such character and depth and dimension, that it could twine and weave in so many directions and adorn itself in so many colors? That this southern-most continent, unpossessed by any country and preserved for peace and science thanks to the Antarctic Treaty System, possesses a harsh climate is so obvious it practically doesn’t bear mentioning. But behind the bleak land and seascape, Copeland discovered a land he now describes as luminous and ever-changing, with ice bergs the size of a city block and a crucial message within the continent’s very ice-packed core—human activity is altering the world, and Antarctica itself is a blazing testament to that fact.

“Welcome to Antarctica,” Copeland states in the book’s prologue, an invitation he has extended to the world. The Los Angeles resident’s images have appeared in galleries around the globe, including the SLO Art Center where Antarctica will be on display Oct. 17 through Nov. 23. 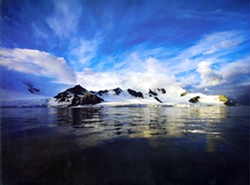 As January of 2006 transitioned into February, Copeland arrived in Antarctica for the first time. The Antarctic summer was almost over, and Copeland had between 20 and 21 hours of sunlight each day with which to shoot. His inspiration for the three-week expedition was a similar effort undertaken in a Canadian territory of the Arctic, Iqaluit. Copeland assisted fellow photographer John Quigley in creating an aerial advocacy image on behalf of the Inuit. He planned to undertake a similar effort for the southern continent.

Of course, seeing the beauty of Antarctica was an altogether different experience from capturing the splendor on film. The bulk of his time was spent aboard the Ice Lady Patagonia—a 144-foot icebreaker—though he also had access to inflatable boats manufactured by Zodiac. Although he knew he would have to adapt to shooting from a ship, his task became more complicated with the loss of control. His trip to the Arctic had been so fraught with technological failure that he decided to transition to digital photography while he was in Antarctica. He purchased a Canon, which arrived the evening before his departure and proved impervious to the vast quantities of rain the group encountered.

“When I was in the Arctic the year prior I was inexperienced in shooting in cold environments,” Copeland admitted. “We had one morning where the wind chill factor was minus 60 and I had brought traditional shooting equipment—medium format and large format. I was really inhibited. The shutter on my camera froze, my hands were too cold trying to load film.”

The aerial image also proved difficult to produce for various reasons—most of them ice-related. Finding an ice berg that was accessible to the people who would be situated upon it for the photograph and flat enough to function as a backdrop was so difficult that at one point Copeland was afraid that some fellow crew members would abandon the project. Besides being slippery, icebergs are prone to rolling in the ocean. By the time they identified a suitable chunk of ice on a rainy day in the Gerlache Strait they didn’t have access to a helicopter, which Copeland had been hoping to shoot from. Instead, he worked from the mast of a ship, 60 feet in the air.

His subjects, which he had been intending to pluck from a cruise ship, ended up being the passengers on the science research ship he called home during his three weeks in Antarctica. And, in a true homage to flexibility and determination, Copeland had to change the very content of the photograph when the screaming penguin he had originally designed failed to translate visually. Instead, he asked Quigley to reposition his subjects in the shape of a large, orange SOS, a message that equally conveys the environmental weight of climate change.

When Copeland first began working with Global Green, the organization he traveled to Antarctica on behalf of and that he is now a board member of, most people weren’t that familiar with the concept of global warming. That was a decade ago.

“I had been committed to environmental advocacy but at a minimal level and had wanted to get involved more,” he explained. “It was really a function of understanding better the nature of what Global Green was doing and getting a better understanding of the nature of climate change. There was a lot more I could do to contribute than signing a check. So I offered my services.”

When he’s not clambering up ship masts in Antarctica and fending off charging polar bears in the Arctic, the focus of Copeland’s camera is markedly different. He is a celebrity photographer whose subjects include Kate Bosworth, Sandra Bullock, and Orlando Bloom—who also happens to be his cousin. Environmental advocacy and endangered chinstrap penguins may have been little more than buzzwords to the celebrities who have dominated the Los Angeles social scene, but Copeland has learned to meld the two, hosting an annual green Oscar party on behalf of Global Green and tossing out celebrity names like shark bait in order to generate media buzz.

Perhaps the most obvious question for the photographer who continues to focus his gaze to the farthest northern and southern reaches at such a pivotal moment, which he refers to as the “all hands on deck moment in our history,” is why Antarctica? The answer, science aside, is fairly simple. The poles are heating at an accelerated rate in comparison with the rest of the globe. And, because of the overwhelming quantities of ice, any changes that take place there are bound to be highly visible.

Even minor monthly shifts can completely alter a scene, as Copeland learned while shooting at Nekko Bay, where he discovered such exuberant colors that he selected the setting as the cover for his book.

“The most interesting aspect of traveling in Antarctica is the constantly changing landscape, especially the seascape,” he said. “Nekko Bay was extraordinary. The light hung for a really long time. There was a certain luminosity to the area. The sea was completely reflective, like a mirror.”

When he returned a year later the water was disturbed and didn’t carry even the faintest trace of ice bergs, a transformation not altogether ominous except as a portent of imminent and more permanent change for lustrous Antarctica.

INFOBOX: As cold as ice

Antarctica: A Global Warning, the photographs of Sebastian Copeland, will be on display Oct. 17 through Nov. 23 at the SLO Art Center. On Oct. 17 from 6 to 9 p.m. there will be an opportunity to meet the artist. For more information visit www.sloartcenter.org.

Arts Editor Ashley Schwellenbach ran with the penguins and marched with the bulls. Send earmuffs and running shoes to aschwellenbach@newtimesslo.com.