While they grieved, Ana and Patrick O'Sullivan found out that they weren't alone.

In the wake of their son Tomas' tragic suicide in 2016, Ana and Patrick talked to parents in the San Luis Obispo High School community who reached out to them to offer more than just condolences. They shared their own experiences with their teenage children who were also struggling with serious mental health issues.

"A lot of people who came up to us said, 'I have a Tomas,' or 'Tomas isn't alone,'" Ana told New Times. "Then we realized that his issues weren't just unique to him. It's really a societal need."

For Tomas, his struggle began when the family moved to SLO from Illinois. Things got worse when he entered high school, where the academic and social expectations ratcheted up. The stress and anxiety started impacting Tomas' sleep schedule, which in turn affected his mood and ability to concentrate.

Ana and Patrick sought out every private solution they could think of to help him, including therapy and psychiatry, but there was at least one vexing variable: No matter what they did, Tomas' daily environment at school remained a stressful constant.

"The world doesn't stop working," Ana said. "You're still having to go to school and face your peers when you're not feeling great."

That predicament—where students can perceive school as an environment of isolation, stress, and shame—is something that Ana, Patrick, and Kerri Mahoney, a close family friend and SLO High parent who was with Ana when she found Tomas deceased, have set out to better understand and change. Over the past few years, Ana and Mahoney have dedicated themselves to studying the research available on student emotional wellness and mental health, and the gaps that exist in resources, curriculum, and school culture.

"After Tomas took his life, [we] really pursued, OK what else is out there? What did Patrick and I miss? What did we need? What wasn't available?" Ana said.

Statistical trends on teen suicide are alarming: Between 2007 and 2015, the teen suicide rate among girls doubled and among boys spiked 30 percent, according to the U.S. Centers for Disease Control. A recent Vanderbilt University study found that hospitalizations among children ages 5 to 17 for suicidal thoughts or attempts more than doubled between 2008 and 2015.

"Our kids are at this point where it is a breaking point," Ana said. "There are a lot of unmet needs and a lot of critical issues that affect students' learning and their ability to cope with the ups and downs of life."

And it's not just high schoolers that educators are seeing struggle. A recent Harvard University study found troubling trends in the mental health of its freshmen between 2010 and 2015.

"Harvard realized something was different with these freshmen that were coming," Mahoney said. "They were so amazingly accomplished, they had so much to offer on paper, the GPAs were far beyond anything Harvard has seen, but they were noticing that these kids were really struggling during their first year, struggling socially, struggling with failure."

To launch their efforts locally, two years ago, Ana and Mahoney helped establish the REACH Club at SLO High School, which meets weekly at lunch and provides a space for students to connect with each other and learn and talk about tools to cope with stress and anxiety.

"It started really small," said Jennifer Sawyer, a library technician at SLO High and staff advisor to the REACH Club. "We had this idea of let's just make this really open and inclusive and available for exploring these topics, and see where this goes."

Since its beginnings, the REACH Club has grown to about 35 student members, has become a positive force on campus, and has even earned national acclaim after appearing in a segment on NBC's The Today Show. The club is student-run, with guidance from advisors like Sawyer. 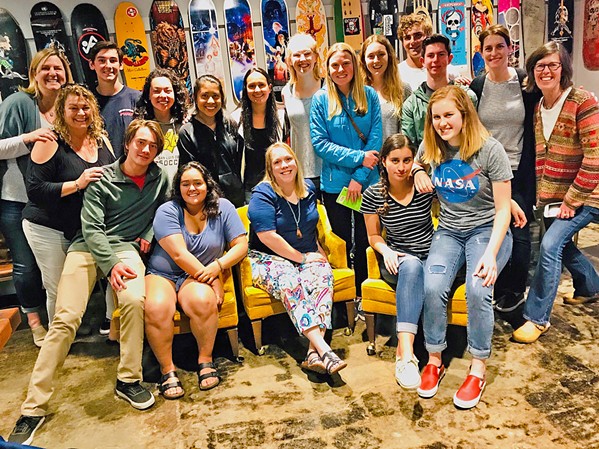 Some club meetings are more structured than others, Sawyer said. They've hosted therapists, psychologists, and yoga instructors as guest speakers to discuss topics ranging from meditation to social media use. Other meetings are as simple as students engaging in a conversation about something that happened on campus, or a topic they feel like discussing. In its purest form, the REACH Club carves out an opportunity for students to simply connect as human beings, away from the arena of who got the best grade on the math test, who made the soccer team, or who got into what college.

"Part of what the kids love is they come in and they're eating lunch together and they're hanging out in small groups, and the big group, and they're just getting to know each other," Sawyer said.

The REACH Club also works together to share kindness and positivity with the rest of the school community. Piggybacking off the popular Take5 initiative at the Cal Poly Kennedy Library, the club brings therapy dogs onto campus during finals week to relieve stress. It also celebrates "kindness month" in March by distributing postcards to peers, staff, and teachers. This past March, REACH Club members put together roughly 700 postcards, each scribed with personalized, heartfelt messages, either compliments or words of encouragement.

"We had a table set up in the quad and students could come and fill out a card for a teacher, staff, or friend on campus," Sawyer said. "We really encouraged students who were doing it to just be genuine and be as open as you can. ... Then we as a club we would take charge in sorting and sending."

A few weeks following the kindness month, The Today Show crew came to town to feature the club as part of a segment about teen stress in the U.S. The show triggered an outpouring of nationwide response.

"People from all over the country contacted myself, Kerri, and Ana saying, 'We need this. How did you do this?'" Sawyer said. "It bolstered the feeling that OK, this is not unique."

Sawyer said she believes the REACH Club is helping students build critical social-emotional skills that they can use to navigate challenges that surface throughout life, not just in high school.

"They're things we all as human beings struggle with," Sawyer said. "If we can help them develop and strengthen those now, they're going to go into college and life more resilient and better able to handle the pressures."

For Ana, Patrick, and Mahoney, the REACH Club represents a resource that perhaps could have helped Tomas at his darkest times, that could just maybe deter a teen suicide in the future.

"We wanted to have a place that Tomas would've felt comfortable walking into," Mahoney said.

Committed to propelling forward the conversation on student wellness, Ana and Mahoney also launched mindfulSLO on their website connectbewell.org. They describe it as a think tank for exploring the challenges and solutions at the intersection of education and mental health. As part of that effort, since 2017, Ana and Mahoney have penned weekly "Love Letters to Parents" that go to SLO High School families through Principal Leslie O'Connor's newsletter. Additionally, the duo is also in discussions with the San Luis Coastal Unified School District about possibly expanding the REACH Club to Morro Bay High School, Laguna Middle School, and other school sites.

"Ana and Patrick have chosen to come forward and not hide underneath the covers—because, truly, losing your son, that's really what you want to do," Mahoney said. "With bravery, they've chosen to take their knowledge, skill set, and passion for other people to start to get to the ground floor of where are the holes." Δ