Joy to the fishes?

Environmentalists say its time to dry cool in Morro Bay.

When it comes to politicians and power companies, itâ€™s easy to forget broken promisesâ€”plenty of new ones will rise to take their place. Residents of Morro Bay, who live in the shadow of its famous towers, canâ€™t help but be aware of their friendly neighborhood power plant, or the  1,002 megawatts it (ideally) pumps into the power grid. Power is money for the City of Morro Bay, and a more efficient juice factory means more funding for schools, roads and fire stations. So which promise, in particular, did many folks forget about? 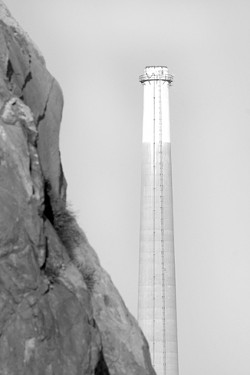 However, as of this month, Duke no longer carries the burden of elusive expectations, as the onus has passed to a new ownerâ€”New Jersey-based LS Power Equity Partners. In a $1.6-billion, 6,300-megawatt deal finalized May 4, Duke sold the Morro Bay facility, along with eight others, to the Jersey-based company. Despite running only two of its four generators, the local conventional steam plant was the second-largest wattage acquisition in the Duke-LS deal. The new owners took little time in unleashing a new stream of promises, including a renewed, possibly augmented, plan to improve the aging facility. The Morro Bay plant lost about 340 megawatts when its two more archaic generators went offline in 1998â€”the only part of a multi-prong modernization effort Duke actually went through with in that year.

Regional water board officer Michael Thomas says renewing the expired licensing that allows the plant to use ocean water to cool the antiquated generators is one item on the new ownerâ€™s to-do list. Unceremoniously dubbed â€œonce-through cooling,â€? the system acts like a radiator, expelling the water back into Morro Bay after it passes through the plant. The use of salt water causes come corrosion of the generators, in addition to a few other minor problems, but ultimately proves a cheap and simple cooling solution.

Power companies like it, but environmentalists hate it because the suction element wreaks havoc on virtually any marine environment; in the case of Morro Bay, the victim is the local estuary. â€œThe eggs and larvae in the bay get run through the cooling systemâ€”not a whole lot can survive that process,â€? says ECOSLO activist Pam Heatherington.

Any talk of modernization is good news for the City of Morro Bay, even if, for now, the chatter merely circulates more promises. Local environmental groups, however, feel now is the time to discuss alternative methods to cool the generators.

Longstanding claims by Duke regarding the impracticality of a more eco-friendly and expensive technology, known as dry cooling, seemingly evaporated in light of recent developments. Last month, PG&E announced its plans to construct a new plant on Humboldt Bay in Eureka, complete with dry cooling technology. It was the second announcement this spring of plans to construct a dry- cooled power plant on the California coastline. â€œThese instances undermine the unity of the power industry in support of once-through cooling and their staunch opposition to alternative technologies,â€? says Jack McCurdy, director of the Coalition Against Plant Expansion. So whatâ€™s the word in Morro Bay?

â€œItâ€™s important to look at the circumstances around each project,â€? asserts former Duke, and now LS, spokesman David Hicks. â€œWith the extensive mitigation, I think the current plan will result in a healthier bay.â€? The existing mitigation agreement, forged by Duke and the city, provides environmental remediation to balance the damage caused by once-through cooling.

Of course, no model proves a perfect solution. In addition to the cost, the circulation units take up quite a bit of space and produce more noise than a once-through pump. â€œI took a trip to a smaller plant up north where they used dry cooling,â€? explains Morro Bay councilman William Pierce. â€œThe building housing the fans was the size of a parking structure and there was this noticeable, low-frequency rumble.â€? The plant Pierce visited had only one generator.

Estimates for dry-cooling a facility the size of Morro Bay would require a structure the breadth of a football field, nine stories tall. The source of these estimates: Duke Energy. â€œI assume they werenâ€™t lying too much,â€? Pierce adds wryly. Andrew Christie, of the Sierra Club, disagrees. â€œDukeâ€™s been trying to make excuses for years,â€? he says. â€œAnd itâ€™s really no surprise we havenâ€™t heard anything from LS. They can read the writing on the wall.â€?

According to Thomas, if LS Power continues use of once-through cooling after the modernization, the corporation will be held to the established ecological mitigation fees, in addition to the outfall lease for using ocean water. Razing and rebuilding the plant would reportedly strip the site of its grandfathered status regarding various eco-codes passed into law over the last half century. âˆ†