Jubilee by the Sea brings hot jazz to Pismo and Arroyo Grande on Oct. 24 to 27

It seems appropriate that the very first Jazz Jubilee by the Sea music festival was back in 1976. After all, that was America's bicentennial, a celebration of our country's first 200 years, and jazz is America's quintessential music—a uniquely American art form that's been embraced around the world.

For the last 42 years, local nonprofit group the Basin Street Regulars has been hosting the festival in Pismo Beach and Arroyo Grande, with events at five venues over three days: Friday, Oct. 25, through Sunday, Oct. 27 ($130 full festival passes; $30 for those under 30-years-old; kids 12 and under free; at pismojazz.com). This year, there's also a Thursday, Oct. 24, free show featuring red-hot New Orleans act Tuba Skinny playing at the SLO Farmers' Market at 7 p.m. at the corner of Higuera and Morro streets. We 3 + 1 also plays on Thursday, Oct. 24, at the Pismo Beach Vets Hall (6 to 9 p.m.; $25). The event features "Bob Draga, Danny Coots, Jeff Barnhart, and Larry Scala ... jamming as only they can while making jokes and bantering," according to press materials. Visit the website for a full schedule! With more than 20 acts playing 100 shows, there're literally too many to list!

Tuba Skinny formed in 2009 as a loose collection of street musicians. In fact, when they're not touring, they usually busk on Royal Street, in New Orleans, on Monday and Friday afternoons between 1:30 and 4 p.m. From spirituals to Depression-era blues to ragtime to traditional jazz, Tuba Skinny embodies the sounds of America's original music. Like most of the acts, Tuba Skinny will play multiple times over the festival weekend. Check the online schedule! 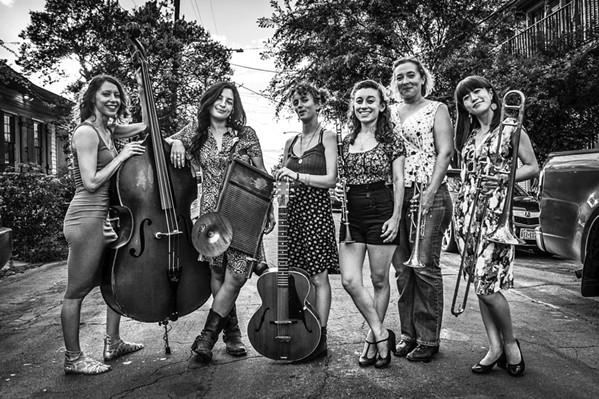 The festival also has two other acts they've brought out from New Orleans. The all-female Shake 'Em Up Jazz Band is returning this year. They're "NOLA's version of Josie & the Pussycats," say organizers. Also from New Orleans is jazz guitarist Larry Scala, who'll make "you feel like you're in a NOLA jazz nightclub."

"The Australian Jazz Connection will be making their U.S. debut at the Jubilee," according to press materials. "They are dedicating a set to Australian tunes played before they had jazz music charts from the USA. Of course, waltzing Matilda will be there as well. Now that should be interesting. From New York City we are bringing back Professor Cunningham and His Old School. This award-winning jazz band is currently touring Turkey, Poland, Vietnam, and Germany, then heading back to Greece and France at the end of the year. But in between they made sure to play our little ol' Jubilee, world famous by now."

The Midiri Brothers, Cornet Chop Suey, Carl Sonny Leyland, Sue Palmer and Her Motel Orchestra, the Starlight Dreamband, the Night Blooming Jazzmen—there are just a ton of great acts! Get your festival badge, make use of the shuttle buses, and celebrate hot jazz!

Café R&B is one of my favorite blues bands to see live. The band's singer, Roach, is absolutely electrifying—think Tina Turner electrifying! The band formed in 1995 and seems to roll through SLO Town about once a year for a SLO Blues Society show, and this Saturday, Oct. 26, they return to the SLO Vets Hall (7:30 p.m.; 21-and-older; $25 at my805tix.com, Boo Boo Records, Cheap Thrills, and at the door). Excellent local act Burning James and the Funky Flames open the show.

It's impossible to oversell just how amazing Roach is! She and her husband, guitarist Byl Carruthers, backed by a tight as hell rhythm section, are simply amazing. Even Ike turner said of the band, "I ain't seen nuthin' like that since me and you-know-who!"

Whether they're delivering classic covers of songs like "Born Under a Bad Sign" and "Killin' Floor," or busting out some of the originals, you can't turn away! They have four CDs out—Black and White (1998), Blues and All the Rest (2001), Very Live (2005,) and American Music (2012)—all of which are great but none of which quite captures the raw energy of their live show. Don't miss them!

SLO Brew Rock brings awesome LA art pop act Sure Sure back to town this Thursday, Oct. 24 (7:30 p.m.; 18-and-older; $16 at Boo Boo's and slobrew.com). These four dudes are fully immersed in their own creativity, which has led to more than 30 million combined streams.

DJ, songwriter, and electronic producer GRiZ plays the Fremont Theater on Friday, Oct. 25 (doors at 6 p.m.; all ages; $48.42 at Boo Boo's and fremontslo.com). He plays the sax to his own self-described future-funk and electro-soul music.

Numbskull and Good Medicine presents Led Zeppelin tribute act Led Zepagain at BarrelHouse Brewing on Friday, Oct. 25 (6 p.m.; all ages; $20 presale at Boo Boo's and eventbrite.com or $25 at the door). At 31 years, the tribute band has been together longer than Led Zeppelin!

Fremont Theater Group and Numbskull present drum and electronica duo The Garden on Friday, Oct. 25 (7 p.m.; all ages; $18 at ticketweb.com), live at SLO Brew Rock, with punk acts Mannequin Pussy and So Pitted opening the show. 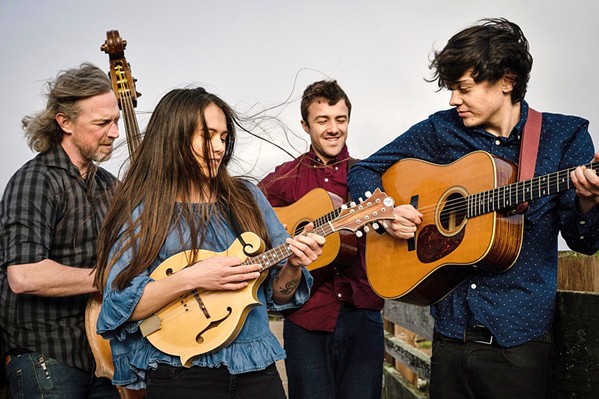 The Polish Ambassador—née David Sugalski—brings his electronic music sounds to the Fremont on Saturday, Oct. 26 (doors at 8 p.m.; all ages; $30.83 at Boo Boo's and fremontslo.com), with Wildlight Kaminanda opening.

Multi-platinum singer-songwriter Jason Mraz joins with Raining Jane to play the Vina Robles Amphitheatre on Saturday, Oct. 26 (8 p.m.; all ages; $50 to $110.50 at vinaroblesamphitheatre.com).

Sean K. Preston & The Loaded Pistols bring their self-described "punk-blues, mountain gospel, rock 'n' roll to Frog and Peach Pub on Saturday, Oct. 26 (10 p.m.; 21-and-older). They're touring in support of Forgive, their album that came out about this time last year.

Grammy, Tony, and Emmy award-nominated singer, songwriter, actress, and author Sara Bareilles makes a stop on her Amidst the Chaos tour on Sunday, Oct. 27, at Vina Robles Amphitheatre (8 p.m.; all ages; $49.50 to $110 at vinaroblesamphitheatre.com). Emily King opens the show.

Two Bay Area acts, indie reggae act The Dangerous and modern reggae act Sunny State, are teaming up for a shared-bill show or the Frog and Peach Pub on Tuesday, Oct 29 (10 p.m.; 21-and-older). Get irie, people!