In a battle over semantics, a San Luis Obispo County judge recently ruled against a resident who took issue with the way that appointed SLO County Clerk-Recorder Elaina Cano phrased the job title that will appear under her name on the June primary election ballot, asking the court to remove it completely. 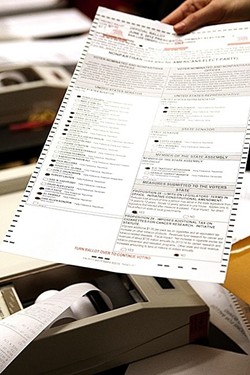 According to attorney Mike Nolan, that phrasing doesn't fly under election law. Nolan filed a March 25 lawsuit against Cano on behalf of SLO resident T. Keith Gurnee. Both men are donors to one of Cano's election opponents for clerk-recorder.

Nolan alleged that under strict rules for appointed office-holders, Cano's ballot designation should have read "appointed incumbent"—with the word "appointed" first, to emphasize that the candidate is not an elected incumbent. That's how Cano originally wrote it, according to the lawsuit, but she later revised it to "county clerk-recorder, appointed."

But on March 28, in an expedited decision due to election deadlines, SLO County Superior Court Judge Hernaldo Baltodano disagreed and denied the request, providing no written explanation.

The lawsuit had asked Baltodano to remedy the error by removing Cano's designation entirely. Nolan said that request was because Cano didn't list an alternate option for a designation.

Cano declined to comment on the lawsuit or ruling, writing in an email that, "I am focused on conducting the upcoming election and managing the rest of my department." Δ