In a June 26 ruling, Judge Ginger Garrett wrote that the growers, which rallied to form the Coalition for Agricultural Rights to sue the county over its recently passed cultivation ordinance, did not meet the burden of showing they were likely to prevail in the case. 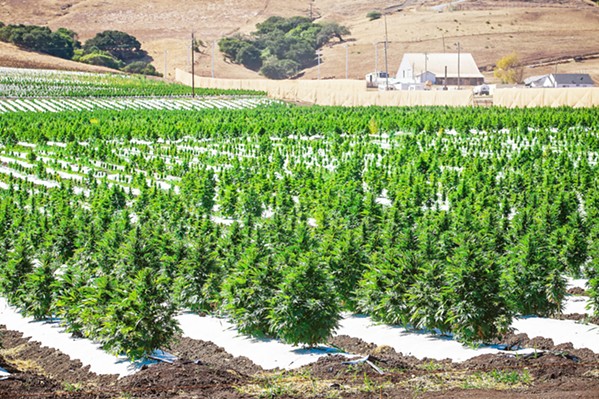 As a result, SLO County can enforce its new rules—which allow outdoor hemp farms only on parcels 400 acres or larger, with 2,000-foot setbacks from property lines, and many other stipulations, including no growing in Edna Valley.

Industry members say the rules are prohibitively restrictive; their lawsuit alleges that the Board of Supervisors violated several laws when it passed them on May 5.

"Farmers understand that the highly restrictive ordinance has not only functionally eliminated the industrial hemp industry, but has also set a chilling precedent in limiting a federally legal and insurable crop," a June 22 Coalition for Agricultural Rights press release on the lawsuit read. "The county violated its own rules when adopting sweeping changes to the ordinance."

The county's permanent hemp ordinance comes on the heels of a countywide moratorium on the crop in 2019. While a few dozen farms continued under the moratorium with vested rights or as research grows, it's unclear how many will be able to operate under the new rules.

Maldonado's Runway Farms drew enforcement scrutiny from SLO County in 2018 when sheriff's deputies spotted it and thought it was cannabis. According to Lea, the new hemp ordinance treats property that overlaps with adjacent counties the same as other parcels, except that the setback distance from the neighboring county line depends on the rules of that county.

"As of today, Runway Farms has just over 10 acres that are eligible for outdoor cultivation ... which is much less than they wanted to grow," Lea told New Times in a July 14 email.

A case management date for the Coalition for Agricultural Rights' lawsuit is scheduled for July 20. Δ