Classy, sassy, and brassy—MarciJean & the Belmont Kings are a terrific jump blues and swinging R&B act to catch live, but the Basin Street Regulars want you to catch some great music, not the novel coronavirus, which is why they're holding their Sunday, June 28, concert virtually on their Facebook page at 2 p.m.

"In view of current event restrictions, the Basin Street Regulars is hosting livestream events at its regularly scheduled concert dates and times," organizers said. "To catch the show, go to Facebook and search for Basin Street Regulars. You'll need to have or create a Facebook page to view this event live. Donations will be accepted, and the show will also be uploaded to YouTube after the event. Visit pismojazz.com and go to our YouTube channel."

MarciJean Fambrini has a terrific voice, and, as their bio claims, listening to her and the band feels like you stepped back in time to a 1940s juke joint. She got her start singing during the 1990s swing revival, when she performed with a number of Bay Area swing bands.

In this time of isolation, Cambria singer-songwriter Mark Stanton Welch has been working diligently to find ways to connect and enlighten his listeners. 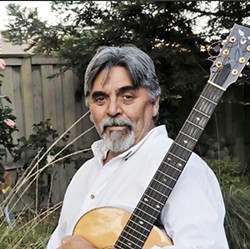 He's been part of the SLO County music scene since 1972, playing in now forgotten venues such as the Darkroom, the Cigar Factory, 1865, the Wine Street Inn, and the Spindle.

"I also functioned as the music director at Unity Church of San Luis Obispo for almost 20 years," he noted via email. "Up until stay-in-place, I've spent the last 20-plus years traveling this country and the world in various ways, sharing my original creations to intentionally empower people through the vibration of music and song. I write to support the listener, inviting them to sing along and use the music to clear old energies and wake up their voice and find that free spirit within all of us."

While touring in Arizona, the pandemic hit, and Welch wasn't sure he'd make it home to Cambria, but he did, and he "immediately felt a 'calling' to write about my experience, to document through music the personal experiences I was having, often on a moment-by-moment basis. So I did. To date I have completed 24. I was guided to write 33, so I still have work to do. I've been waiting to see what unfolds first."

"Regarding the number 33, I look at it as a combination of several factors. It's considered a master number in numerology, extra potent energetically. I think of it as a precipitator of significant change. That Jesus was crucified and transformed at that age is interesting when put against these times of a world waking up to a new vision of itself. The call to write 33 was strong, so I'm looking at them as vibrational tools to support the worldwide change that's in progress, in my opinion.

"Music is a powerful vehicle to impact the listener on deep levels," Welch continued. "These songs are experiential as they are reflections of my movement through the stay-in-place period, which I took as a personal challenge to look at what I might be doing to contribute to the issues in the world. I was not surprised to find places where I was falling short of my own visions. It was poignant and powerful, confrontive and inviting, and certainly catalytic to push me through some strongly entrenched patterns and tendencies. Honestly, I cried a lot through this process and feel all the better as a result. Might say I had a personal resurrection of a 'me' that I had misplaced way back. And for that I am grateful.

"And as a songwriter, it is a parallel intention to create something that will impact the listener in a personal way that has meaning."

Get 'em while they're hot! 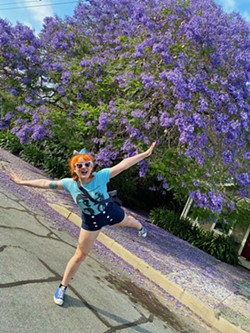 "The vinyl manufacturer—Clamdown Record Pressing—has gifted us with a surprise variant," frontwoman Hayley Cain said via email, "periwinkle blue! There are only 50 in existence! Get yours quick!"

The song is a sugary Go-Go's-style snack of summer dreaming filled with images of blooming purple jacarandas and the desire to leave small-town life behind. Collector's item, people!

"New to our playlist today is 1996 footage of the outstanding pianist Alan Broadbent in duo with Fred Atwood, with introduction by Andy Harp," the Jazz Fed board said. "They played as part of the 13th a+nnual Jazz Piano Showcase presented by the SLO County Jazz Federation on April 27, 1996. Broadbent is a noted arranger and composer who worked extensively with Charlie Haden, Woody Herman, Chet Baker, Irene Kral, Natalie Cole, Diana Krall, Warne Marsh, Bud Shank, Lee Konitz, and many others. His arrangements for Natalie Cole and Shirley Horn won Grammy awards."

Search "SLO Jazz Federation" and YouTube and you'll get there! The Jazz Fed will be posting recordings by Bob Harway, the Jon Faddis Quintet, the Billy Taylor Trio, Inga Swearingen, and many others in the coming weeks. Δ