"All major theme parks have delays. When they opened Disneyland in 1956, nothing worked!"

"Yeah, but, John, if The Pirates of the Caribbean breaks down, the pirates don't eat the tourists." 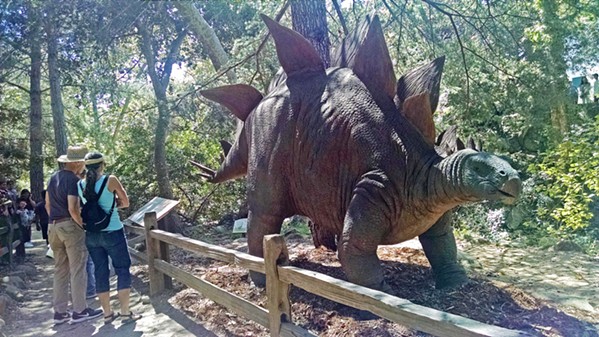 The Jeff Goldblums of the world can rest easy, because unlike Jurassic Park, the dinosaurs featured at the Santa Barbara Museum of Natural History are animatronic. Still, I'm feeling a bit uneasy as I slowly approach the tyrannosaurus rex, only a few steps into the museum's Prehistoric Forest. The outdoor exhibition runs through Sept. 2 and invites guests to travel back in time to the age of the Flintstones—when man and dinosaur coexisted in anachronistic harmony.

The T-Rex tilts his head toward me as I get closer to his allotted domain, located on the banks of Mission Creek. There's some rope blocking me from advancing any farther (as if I would even try). The behemoth opens his mouth (or should I say beak?) and lets out a mighty roar before lunging in my general direction. I only back up a little bit, I swear. I'm too busy worrying about the other dinosaurs—all of which are herbivores—to fear for my own life.

I wonder which one is gonna be dinner tonight? I ponder as I scan the rest of the exhibit's inhabitants—which include a stegosaurus (steak-o-saurus), triceratops (TRI-cera-TIP), and parasaurolophus (pear-a-saur—naa, I got nothin'). Their inevitable doom aside—whether by T-Rex or asteroid—these creatures are wondrous to behold for dinosaur lovers of all ages. The exhibit also includes an excavation area where attendees can brush sand away to reveal a dinosaur skeleton. 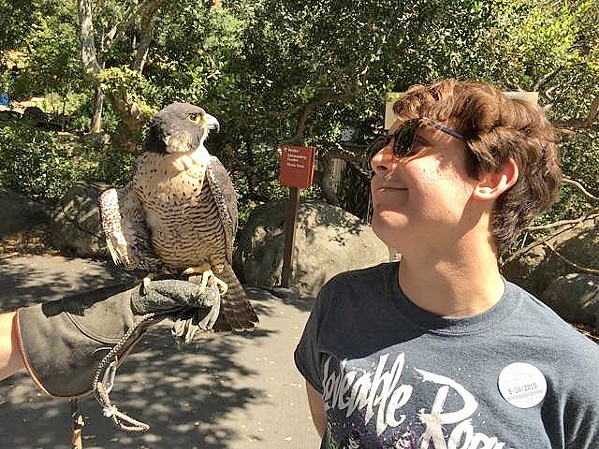 As my fellow paleontologists and I make our way back to the museum's main lot, we can't help but notice members of the Santa Barbara Audubon Society (SBAS) and some of their feathered friends hanging out just outside the Prehistoric Forest's exit. Eyes in the Sky is the name of the program, which features seven birds of prey that serve as "education ambassadors" to the public. Each of these birds were rescued and rehabilitated, but they can no longer survive in the wild due to permanent disabilities. 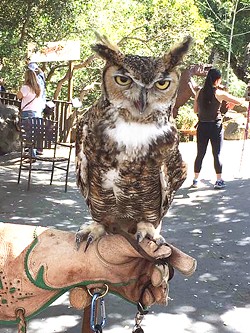 Kisa, a peregrine falcon, for example, was found in Rancho Palos Verdes with a bullet in her shoulder. SBAS adopted her from South Bay Wildlife Rehab in 2011. We also meet Max, a great horned owl, who was found as an orphaned nestling (too young to leave the nest) in 1998. Raised by humans, Max became irreversibly imprinted and can't be released back into the wild. But since his wild instincts remain, Max has become a father figure to other orphaned owlets the SBAS has adopted (raising more than 70 for re-release back into the wild).

Next on the docket is Butterflies Alive, another outdoor exhibit included with museum admission. My friends and I stroll through the beautiful garden pavilion, which houses nearly a thousand live butterflies. I stand still for a moment, extend my arms, and open my palms, inviting the butterflies to flutter around me. I don't think they bite, but part of me hopes one of them is radioactive and I get bit—inevitably becoming a butterfly superhero. Δ

Calendar Editor Caleb Wiseblood is Butterfly-Man. Contact him at cwiseblood@newtimesslo.com.