In what's being billed as the final installment of the Jurassic Park/World franchise, co-writer/director Colin Trevorrow (Jurassic World) depicts a world set four years after the destruction of Isla Nublar where dinosaurs populate the planet, competing alongside humans for resources. Can humans remain the world's apex predator? (146 min.) 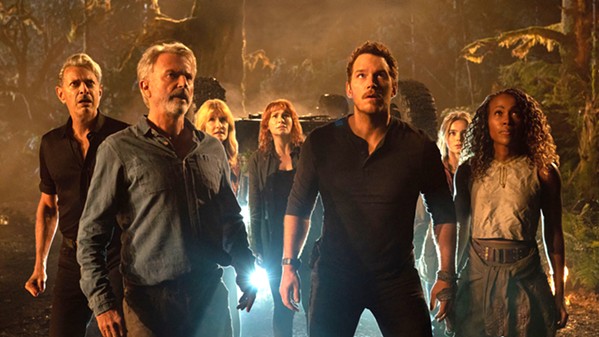 Glen Considering the many bad reviews this film has garnered—its critics Rotten Tomatoes score is 30 percent—I went in with low expectations, so I'm happy to report that this is a crowd pleaser. Don't get me wrong: It's no Top Gun: Maverick. But it's a fitting end to the franchise and brings together stars from the early and latter trilogies. Laura Dern returns as Ellie Sattler and Sam Neill as Alan Grant, and Chris Pratt is back as Owen Grady and Bryce Dallas Howard as Claire Dearing. You also get Jeff Goldblum as Ian Malcolm and BD Wong as Dr. Henry Wu. At the heart of the story is Maisie Lockwood (Isabella Sermon), clone of Benjamin Lockwood's daughter, Charlotte Lockwood (Elva Trill), who Owen and Claire have adopted as their own, hiding her away from antagonist Lewis Dodgson (Campbell Scott) and his malevolent company Biosyn, which developed a giant locust that's eating all crops not grown with Biosyn seeds. Fans will no doubt recognize the familiar themes of using science for greedy and pernicious reasons and the hubris of humans thinking they can control nature. Also, and this is important, there are a bunch of BADASS DINOSAURS!!!

Anna There will never be the magic of the first Jurassic Park in any of the follow-up films for me because it was such a huge deal when it came out in 1993. I was a wee kid who fell hook, line, and sinker for the universe Spielberg brought to the screen, where even the possibility of petting a dinosaur came to life. That said, I've also enjoyed the sequels and additions to the Jurassic universe—some more than others. My fear with this being the final film is that it wouldn't be able to button things up nicely. After all, how do you put the dinosaurs back in the box after they've been spilled all over the world? I'm happy to say that while this film reaches toward ridiculousness in many ways, the nostalgia of Grant, Sattler, and Malcolm back in the mix was a total win for me. The Jurassic world has gotten so much bigger and messier since the first film; what started as a lesson that "just because you can do something doesn't mean you should" has morphed into a world war against the monsters man himself brought back to life. It's big and loud and heart-pumping in intensity. It will never be my favorite film of the series, but I'm definitely happy with it as an end cap.

Glen Heart-pumping is right! When Dodgson's operatives come after Maisie and Beta (velociraptor Blue's offspring), the subsequent chase is an amazing sequence. This entire series raised the bar on computer-generated images, and this final installment is another technical achievement. The cast is terrific, too. The stars shine bright, but I was floored by Mamoudou Athie as Biosyn employee Ramsay Cole, whose loyalties are unclear. I was also wowed by DeWanda Wise, who stars as mercenary pilot-for-hire Kayla Watts who has a conscience after all. Scott is terrific as the villain who tries to come off as a concerned and ethical beacon of science. It's such an inventive story. When novelist Michael Crichton wrote Jurassic Park in 1990 and followed it with The Lost World in 1995, I'm sure he had no idea where his cautionary tale would be taken. He died in 2008, but I bet he'd be proud of this franchise.

Anna I have both Jurassic Park and The Lost World as audiobooks and listen to them frequently. Needless to say, Crichton created this world, and we're all just lucky it's continued on for us to enjoy. When Jurassic World hit in 2015, it brought new life and new blood to the series with Pratt and Howard. They're once again used well here and offer great chemistry. I'm happy to report that while critics may be above this film, audiences are digging it, and I'm one of them. It's good family fun if your kids are the right age to handle some monsters. All good things must come to an end, and I'm sad to see the Jurassic universe go. Δ