'Jurassic World: Fallen Kingdom' is fun and slick and formulaic

J.A. Bayona (The Orphanage, The Impossible, A Monster Calls) directs this follow up to Jurassic World (2015), which was about an island dinosaur park and a genetically modified hybrid dinosaur that goes on a killing spree and brings down the park. Three years later, the island has been abandoned and left to the dinosaurs, but then the island's dormant volcano rumbles to life, threatening to kill all the dinosaurs. Claire Dearing (Bruce Dallas Howard) and Owen Grady (Chris Pratt) mount a rescue mission, but do the powers that be have an ulterior motive to funding their attempt? (128 min.)

Glen It wouldn't be wrong to call this new entry into the Jurassic series formulaic, paint-by-numbers, and rote, but should we expect anything more? After all, like most franchises, its purpose is to sell tickets and give audiences what they want, which is more of the same. Don't go into Fallen Kingdom expecting anything fresh or original, but if you have a hankering for more dino mayhem, condemnation of human hubris and greed, a child in peril and in need of a savior, and pithy dialogue wrapped in a slick, well-directed-and-acted, ultra-expensive blockbuster—booyah! You got it! After the opening set piece on Isla Nublar where we see mercenaries doing nefarious stuff and then a cut to a U.S. Senate meeting trying to determine if the island's remaining dinosaurs should be rescued or left to perish in the volcano, we're introduced to our Dinosaur Protection Group, led by Claire, the group also includes feisty dino veterinarian Zia Rodriguez (Daniella Pineda) and nerdy tech expert Franklin Webb (Justice Smith). Claire gets a call from Jurassic Park founder John Hammond's former partner Benjamin Lockwood (James Cromwell), promising a well-funded humanitarian mission to save as many dinosaurs as possible before the volcano blows. There's just one catch: Lockwood and his right-hand man Eli Mills (Rafe Spall) really want her to save Blue, the velociraptor trained by Owen. Faster than you can say "sexual tension," Claire has enlisted Owen and they're off to Isla Nublar to meet Ken Wheatley (Ted Levine), who's leading the security team. Do things go as planned? It wouldn't be a Jurassic World movie if they did! The action is exciting, the characters are engaging, and the dinosaurs are ferocious! Mission accomplished.

Anna I've been hooked on all things Jurassic since day one, from mad crushing on Sam Neill as Dr. Allen Grant as a 9-year-old, through the rough waters of Jurassic Park III, and onto the storyline revamp the Jurassic World movies have presented. While my heart still beats most strongly for classic beasts like the iconic T-Rex and raptors, the new hybrid dinos make for one hell of a predator. The film opens up with a scene especially meant for fans of the original: Dr. Ian Malcolm (Jeff Goldblum) is in front a Senate hearing in an attempt to dissuade them from stopping the extinction of the creatures trapped on Isla Nublar, saying that humans have played God so badly, they have created their own pathway toward extinction of their own species. Claire's bleeding heart for the creatures she once cared for can't be overcome by any logic behind that appeal, and her focus is concise—save the dinosaurs whatever the cost, even if that means begging an ex-boyfriend to come along. Cue action, adventure, gigantic scary creatures, one-liners up the wazoo, and everything else you can expect from this particular film formula. But hey, if the formula results in two hours of a rollicking good time watching bad dudes get chomped on, I'm in! Even though I couldn't hold out for the epilogue to see what's in store (seriously, those credits were like 15 minutes long!), you can bet my butt will be planted in that seat opening weekend and a childlike smile of wonder will be all over my face. 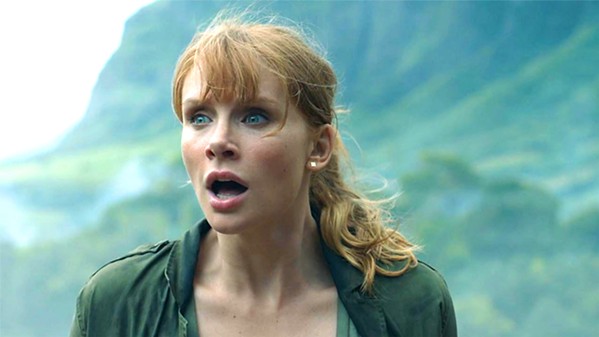 Glen Speaking of childlike wonder, Fallen Kingdom's child in question is Lockwood's granddaughter Maisie (Isabella Sermon), a precocious little girl who has the run of her grandfather's sprawling estate and drives her nanny, Iris (Geraldine Chaplin), crazy. Lockwood is of ailing health and loves Maisie but can't keep up, and it's not long before the little girl begins to suspect Eli Mills has a hidden agenda beyond her grandfather's wish to save the dinos. After the action on the island, we return to Lockwood's estate for the final act, and though sprawling, with dinos in the middle of it all, the estate quickly turns claustrophobic and deadly. It's exactly the ending the film is calling for. In fact, all the way through, I kept thinking, "This is exactly the right piece of dialogue, freshly introduced character, or moment of action." That's both a compliment and a criticism because as well-crafted as the whole affair is, it feels like film writing by committee, aimed at the least common denominator audience. This is a big, fun, entertaining, summer popcorn movie that audiences will like but critics will condemn thanks to the law of diminishing returns. You can only throw the same thing at the screen so many times before it becomes surprise-free, and I'd say we're just about there. But if you're interested, see it on the big screen for full effect.

Anna I personally prefer when the island is the main locale, but as for creating the feeling of being trapped, the mansion certainly did the trick. The change in location also introduces a big group of animals to the world outside of their island, and the population at large to the possibility of dinosaurs roaming among them if they were to escape. By this point, you would think everyone would take a lesson from past events and learn that if things can go wrong with dinosaurs and humans mixing, they will. Alas, the power of greed continues to overpower common sense, and Henry Wu's (B.D. Wong) genetic handiwork continues to wreak havoc around every corner. Fantastic cinema Jurassic World: Fallen Kingdom is not—I'll still watch the original anytime over the other films in the franchise—but it absolutely delivers a polished piece of dino magic meant to be seen on the big screen. Δ