A San Luis Obispo County jury concluded on Dec. 12 that a stretch of Highway 1 south of Hearst Castle is in "dangerous condition," after a 2011 head-on collision at the location severely injured a man and killed his wife. 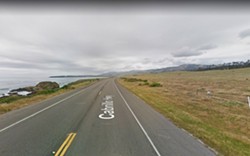 In a personal injury case against the state Department of Transportation (Caltrans), jurors agreed with the family of Peter Fuller, the survivor of the wreck, that the road's contours made car passing in the area unsafe, but declined to hold Caltrans liable for $15 million to $20 million in medical and emotional damages.

Caltrans officials declined to comment about whether the agency would paint solid the dotted line that currently allows car passing shortly after the 55 mile-marker, which was around where the Fullers' fatal crash occurred six years ago.

"Caltrans will not comment further at this time because of the potential for an appeal, leading to further litigation," Caltrans public information officer Jim Shivers said in an email.

Fuller's attorney, Jim Wagstaffe, told New Times that the jurors on the trial planned to co-author a letter to Caltrans asking it to make fixes to the highway. Painting over the stretch of dotted lines would cost about $5,000, Wagstaffe said.

"It wouldn't take much to fix it," he said. "I'm confident Caltrans will do its job."

According to court documents, in October 2011, Peter and Joan Fuller of Pennsylvania were driving southbound on Highway 1 in a Toyota Camry at 55 miles per hour when a northbound Toyota Tundra attempted to bypass a slower-moving tour bus. After accelerating to 79 miles per hour (in a 55 zone), the Tundra collided head-on with the Camry.

The two drivers didn't see one another until it was too late, Wagstaffe said, which was evidenced by black box data showing Fuller's vehicle didn't brake until 1.8 seconds before impact. Wagstaffe described the collision point as at the "crest" of a small hill, where visibility was blocked for both drivers as they approached.

"These cars came out of nowhere," Wagstaffe said.

Wagstaffe said the Fuller family planned to appeal the jury's denial of damages, but he added that if Caltrans painted over the dotted divider line sooner than the litigation resolved, "he'd never put that into evidence" as an admission of guilt.

"I don't want any more people to die there," he said. "It was clear [the family] wanted this roadway fixed because they didn't want their mother to have died in vain." Δ