A years-long legal battle neared its end March 15 as jurors began their deliberation in a defamation lawsuit brought against the CalCoastNews website by a local businessman.

It will be up to that jury to determine whether a 2012 article on the website—which claimed Charles Tenborg and the waste hauling company he used to own, ECO Solutions, illegally hauled hazardous waste and encouraged local municipal entities to skirt state laws—was false and damaging to his business and reputation. As a result of the verdict, the article’s authors and CalCoastNews co-founders Karen Velie and Dan Blackburn could face hundreds of thousands of dollars in damages. 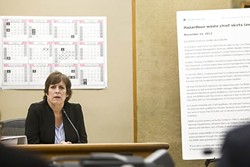 In his closing arguments to jurors Tenborg’s attorney, James Wagstaffe, aggressively attacked the claims in the article, accusing Velie and Blackburn of purposefully ignoring established journalistic practices in order to publish a splashy story based on “rumors,” “hearsay,” and “scandal mongering” about alleged government corruption involving Tenborg.

“The First Amendment is not a hunting license,” Wagstaffe said.

During the trial, Wagstaffe questioned the reliability of the information represented in the article and the sources Velie and Blackburn relied on to back up the claims in the story. Venise Wagner, a San Francisco-based professor of journalism and a paid expert witness for Tenborg’s defense, questioned the article’s use of unnamed sources and said that many of the claims of wrongdoing leveled at Tenborg in the article lacked attribution to individuals or documents to back up the claims.

“I read the first paragraph initially and asked, ‘Where is the proof?’” Wagner said. “I kept reading, but I never found it.”

Velie, Blackburn, and CalCoastNews editor and Cal Poly journalism professor Bill Loving all testified as part of the trial. Throughout the proceedings, CalCoastNews and its attorneys insisted that the claims in the story were true. During her testimony, Velie said she spent more than 10 months working on the story and believed the information she used to write it came from reliable sources.

“We had interviewed dozens of sources and reviewed hundreds of pages of documents,” Velie said.

During the trial, Wagstaffe repeatedly argued that little, if any, documentation backing up Velie’s claims showed up in court. Velie testified that the notes she took while researching the article were lost when her computer broke sometime after the story was published. Wagstaffe told the jurors he believed the notes were deliberately destroyed.

“There’s not a single note in this case,” he told jurors. “The dog ate my homework. That’s what you have.”

David Vogel, one of the attorneys who represented CalCoastNews, said in his closing arguments that the burden of proof was on Tenborg, not the news site. He also repeated claims made by Velie and Balckburn that the article was one story in what supposed to be a series, and that additional proof of the claims were supposed to come out in a future article, which the website never got around to publishing because of the pending lawsuit.

“They are acting like the facts got in the way of this article,” Vogel said. “I think the facts were still being developed.”

Velie and Blackburn, who shared a byline on the story, testified that they each worked on separate halves of the story before melding them together. CalCoastNews Editor Loving expressed confidence that the story was correct and was reported with due diligence.

The article has remained on the CalCoastNews website since 2012. During his testimony, Tenborg said the allegations leveled at him in the story negatively impacted both his business and personal life. His lawyers presented evidence that they believe showed the article is the first result that pops up when Tenborg’s name is searched on Google. He said it was not only distributed to his peers in the waste industry but was also looked up by a woman he began dating after the story was published.

“This was a damaging article. I took it very personally,” Tenborg said. “I became very depressed as a result of this.”

Wagstaffe asked the jurors to award a total of $2 million in damages in the case. That includes $500,000 in punitive damages, which he said would send a message to CalCoastNews and Velie.

“It represents a sensational hit piece,” he said. “No contrition was shown.”

Vogel called the suggested amount of damages “outrageous,” and noted that Velie remained confident that her reporting was correct.

“She was seeking out the truth,” he said. “She still belives she got the truth.”