Just a taste: A partial tour of the Pismo Preserve

For months I’ve watched a trail widen its swath along the hills near Pismo Beach wondering when I would get the chance to see what’s happening.

I tried to volunteer to cut trail, but every Saturday trail crew for months was booked solid—no space left—and then, they were done. The green-yellow hills of early spring were replaced with the pale brown of summer, and yet, still, the Land Conservancy of SLO County-owned Pismo Preserve is closed to public access. But, no worries, I got your public access. Because I’m a journalist (see, it’s not all bad for people in my line of work!), I talked my way into a members-only hike that showed off parts of the preserve on a recent Wednesday. I know, lucky me!

Randy Knight—a Land Conservancy board member at large—met us next to the porta potties overlooking Highway 101. I am definitely the youngest one in attendance by 20 years. Hey, it’s 3 p.m. in the middle of the week. My first thought is: “I hope these guys don’t kick my ass on the trail.” Knight gives us a quick rundown before we head in. 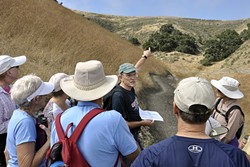 Since January, volunteers and members of the Land Conservancy of San Luis Obispo County have spent 6,500 hours hacking, building, and cutting 11 or so miles of trail into the more than 900 acres of land that make up the Pismo Preserve. But the Land Conservancy still needs to make space for and pave two parking lots: one for horse trailers and one for hikers and bikers. And, among other little things, the conservancy also needs to install bathrooms that tie into the city of Pismo Beach’s sewer system.

In addition to the trails, there are miles of old “fire” roads—also known as access roads for the ranchers who used to run cattle on the property. We start by heading up one of those. Climbing above 101, I wonder if the vegetation will change. Foxtail and veldt grasses edge up the slopes. Those two and thistle seem to be pervasive and just about all there is. Knight informs us that a lack of native vegetation is a result of the land being grazed by cattle for so long. Eventually, that will change—at least that’s the hope. That’s the future. 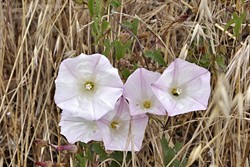 As we round the shoulder and head away from the rush of vehicles careening by what drivers definitely can’t see from their windows, the sound starts to fade away. Artemisia, which smells like a sweeter version of sage, and sticky monkey flowers (native vegetation!) show up in clumps between boulders. Oaks with moss hanging in romantic greens are visible way too far away from me.

The mansions of Pismo Heights start to poke their million-dollar heads above the grasses and we continue into the hills, under small oak groves and circle back to where we started. We don’t have time to find a ridgeline, but I can see the promise of acres without development. Oaks and valleys, greens and browns. Open space.

I can almost feel the sun and the pervasive views of pale, teal, and green blue water foaming and breathing life into the sky. I can’t see it very well through the wall of fog, but I know it’s there. Really, that’s enough. I know I want to come back and explore farther inland. 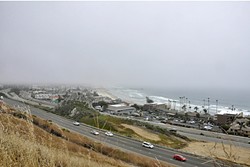 But, unless I’m a member, I’ll have to wait for permits, paving, and whatever else our various local governmental bodies decide to heap upon the project.

Editor Camillia Lanham will hike pretty much anything, as long as it’s not a workday. Email comments to clanham@newtimesslo.com.