You love the French!

Even though we frequently make fun of the French, most Americans are Francophiles. We may lament French laze (“I am le tired!”) and the French penchant for making love with their faces, but we secretly envy their 30-hour workweeks, three-hour meals, and Gallic lifestyle.

We especially like their music, and like Hemingway and other ex-pats, we idealize their art-obsessed culture. So if you’re hankering to indulge your inner Francophile, may I direct your attention to the next SLOfolks concert, Baguette Quartette, which will perform la Musique de Paris on Saturday, July 28, at Castoro Cellars (7 p.m.; $22; and for an extra charge come at 6 p.m. for a catered dinner by Thomas Hill Organics; call 238-0725 for reservations)?

Performing Bal-musette, a style of French music and dance that first became popular in Paris in the 1880s, Baguette Quartette utilizes violin and musette, or what we call accordion, and concentrates their repertoire on music from the ’20s through the ’40s. This San Francisco group plays valses, musettes, tangos, pasos dobles, fox trots, marches, and songs, and is led by Odile Lavault, a Paris native. Knowing that Django Reinhardt started his career as a banjo player in a musette dance band may help you zero in on their sound.

Bring a blanket or low seat and low back chairs if you want to sit in front. Bring a warm jacket ... just in case! Vive la France!

I miss Kaye Bohler and her larger-than-life performances. She used to be a regular fixture around these parts, but then she jumped ship and moved north, to Santa Cruz, where her blues, soul, and R&B sounds have become favorites there and, in fact, all over California.

She’s appeared at the Monterey Bay Blues Festival an unprecedented six times and played just about every other blues festival in the state to boot. Now she’s returning to her old stomping grounds in support of her critically acclaimed 2011 CD Like a Flower, which features 10 original songs by Bohler. One review even compared her to Carol King as an original singer-songwriter, and Downbeat Magazine voted it one of the best CDs of 2011! More importantly, she’ll be testing out materials from her fifth, upcoming CD.

“I’m so excited about my new CD,” she said. “We’re coming down to perform at D’Anbino on Friday, July 27, and Saturday, July 28. Hope you can give us a little plug as we are doing two nights!”

Bohler is like a stick of dynamite—an explosive performer with an incredible set of pipes and tons of stage presence. On her new CD, she’s been working with Grammy Award-winning producer and guitarist Pete Andersen in L.A.

Andersen was the producer for 20 years behind Dwight Yoakum, and he’s also produced for Tanya Tucker and Michelle Shocked. Bohler says he’s bringing out the very best of her next 10 original cuts. Don’t miss these shows (8 p.m.; $10; $5 for Record Club members)!

The African Showboyz return to the Steynberg Gallery on Saturday, July 28 (8 p.m.; all ages; $20), featuring Napoleon, Joseph, Moses, Isaac, and JJ Sabbah—all brothers. They were born and raised in Binaba, a small village in the northeast region of Ghana, West Africa.

According to press materials, “In Binaba, it is the way of the village for the men to marry multiple wives. The Showboyz are born from the same mother and the same father, though collectively there are 54 children from their father’s descent.

“Napoleon, the elder of the brothers, received a vision from his grandfather named Apabum Abugri during a juju practice at a very young age. He was to embark on a world journey in an effort to bring recognition to the [suffering] of the African people and feed his ever-growing family.

“Napo engaged Joseph, next of kin, his ‘backbone,’ and they made instruments from thigh bones and hides of village kills that had been given to the chief’s palace. Isaac was taught village dances to accompany Napoleon’s kone and Joseph’s siyak, and in 1983 the three Sabbah children set out on two bicycles to play for neighboring villages.

“It is fascinating to note that while touring in Africa, the brothers carried no documentation but simply performed for immigration officials at the borders and were permitted access.”

Steve Key’s Songwriters at Play might have lost its regular Thursday night spot at the Porch, but on Thursday, July 26, it’s kicking off a new regular location: SLO Down Pub in Arroyo Grande (6:30 p.m.; all ages; pass the hat).

“The July 26 debut features one of our favorite local musicians: Amber Cross of the Old-Time Fiddle & Banjo Show,” said co-organizer Bonnie Nelson. “Originally from Maine, Amber Cross grew up surrounded by gospel music in a small-town church where her father still preaches and her mother plays piano. Commonly referred to as ‘The little girl with the big voice,’ Amber’s original old-time style has been likened to that of an old Smithsonian recording. She writes from her own life struggles and experiences delivering her stories with unforgettable power and emotion. Her major influences are Hazel Dickens, Iris Dement, Rose Maddox, Tom Waits, Greg Brown, and the Carter Family.”

Rob Kimball, Young Ireland, Ivan Ulz, and Erin Montgomery are also on the bill that night.

The showcases continue on Sunday, July 29, at Sculpterra Winery, where Kaye Bohler will perform her original blues, soul, and R&B songs (1 p.m.; all ages; pass the hat). “She’s captivated audiences from Japan to Alaska for over 25 years,” Nelson said. “Bohler is frequently called ‘The White Tina Turner’—a three octave-plus vocal range, a curvaceous silhouette, and a disarming wit on stage, she engages and draws the listener in like few other performers.” Craig Louis Dingman, Lauren Barth, Young Ireland, and Elisabeth Carlisle are also on the bill.

D’Anbino will kick off your weekend right with the music of Steve Poltz on Thursday, July 26, from 8 to 10 p.m. Considered one of the most beloved songwriters of his generation, he’s a member of the cult legends the Rugburns, and his songs have enjoyed long stretches in the Billboard Top 10, populated mainstream radio airwaves, and appeared in tons of TV shows, commercials, and movies. Admission is $20 at the door.

International touring artist and Grammy Award-winning guitarist Ed Gerhard returns to Coalesce Bookstore in Morro Bay on Friday, July 27 (7 p.m.; $20; call 772-2880). The virtuosic performer is an entertainer in every way, and he’s currently touring in support of his new CD There and Gone, a collection of both original compositions and select covers such as a mash-up of “Imagine/Across the Universe,” “I’m So Lonesome I Could Cry,” and a concert favorite on his Weissenborn, “Killing the Blues.”

SLO Brew’s got a light schedule for the week, when local reggae act Bare Feet plays with Thrive on Friday, July 27 (7:30 p.m.; all ages; $10 presale or $12 at the door). Bare Feet plays rootsy reggae, harmonic rock, and jumpy hip-hop. The club heats up again next week when Tribal Seeds plays on Friday, Aug. 3; I help judge a bikini contest on Saturday, Aug. 4; Old Man Markley returns on Monday, Aug. 6; Paul Thorn plays on Tuesday, Aug. 7; and the Charm City Devils fire up on Wednesday, Aug. 8. 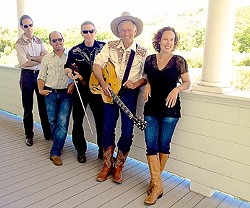 If y’all simply must have some western swing and honky-tonk, you won’t do much better than The Swingin’ Doors, who’ll be playing a show on Friday, July 27, from 6 to 8 p.m. at the Avila Bay Athletic Club for their summer Friday music series. Witness the high energy fiddlin’ of Allan Dick, the swingin’-chicken-pickin’ guitar of Ted Waterhouse, the sweet-as-honey vocals of Ynana Rose—all backed by the fluid, solid thump of Fred Murray’s standup bass and Daryl Vandruff’s drums. This band mines “the treasure troves of old-school western swing and honky-tonk country from Bob Wills to Patsy Kline, Hank Williams to Lefty Frizell, and with a heapin’ helpin’ of their own excellent original tunes,” according to Waterhouse. Bring your dancing shoes for some turns around the dance floor as the band plays swing, two-steps, and waltzes. This show is free, all ages, and there’re plenty of adult beverages for those 21-and-older.

The fabulous Dentures surf band will bring their epic sounds to Niner Wine Estates (2400 Highway 46 West, Paso Robles) on Saturday, July 28, from 1 to 4 p.m. These dudes may be old, but they know how to rock the ’60s surf sounds like nobody’s business! Attendees are encouraged to don their best ’60s outfits and get into the spirit of the event. Don’t wipe out, groms and gidgets!

Arroyo Grande Village Summer Concert series is going to rock this Sunday, July 29, when The Mean Gene Band delivers some blistering rock, country, metal, blues, and R&B classics from the Rotary Bandstand starting at 1 p.m. The Central Coast Follies Dancers will also be on hand to entertain the crowd, and the event is also an Arroyo Grande High School alumni gathering.

Also on Sunday, July 29, you can experience a celebration of the music of George and Ira Gershwin during the next Famous Jazz Artist Series at D’Anbino wine tasting room. Central Coast jazz stars Ken Hustad and Karl Welz (bass and tenor saxophone) will join one of the West Coast’s top jazz drummers, Paul Kreibich, along with series co-producers Charlie and Sandi Shoemake (piano/vibraphone and vocals) to perform this all Gershwin program. There’re 4 and 7 p.m. shows for $15 each, or see both for $20. Call 927-0567 for reservations. While you’re there, tell Charlie happy birthday. He’s turning 75!

Soulful singer-songwriter Jc Villafan will be joined by Kyle Castellani on Wednesday, Aug. 1, to play a 7 to 9 p.m. show at Linnaea’s Café. The L.A.-based Villafan plays original soul, R&B, pop, and adult contemporary music, and will perform from 7 to 8 p.m. Castellani will go on at 8 to perform his original Egyptian blues and folk music. The show is free!