'Just because I have my standards ...'

I have the same problem with tribute shows as I do with wax museums. Generally, I feel the same repulsion when embracing the waxen effigy of Johnny Depp as when watching someone pretending to be Liza Minnelli who is not Liza Minnelli.

Seated in the equalizing pitch-blackness of the Clark Center, though, something shifted.

Frank Sinatra was there, singing—what else?—“Luck Be a Lady.” Dean Martin crooned “Let There Be Love,” followed by the Rat Pack’s “Me and My Shadow.” Liza Minnelli did—of course!—“Cabaret” and Barbra Streisand sang “Don’t Rain on My Parade.” Beautiful, yes, but still Carnival Cruise fare.

And then there was Diana. Clarissa Spiller, who was so fabulous as activist/performance artist Maureen in Cuesta College’s production of Rent, owns the role of Miss Ross, a woman quoted as saying, awesomely, “Just because I have my standards, they think I’m a bitch.”

Spiller cemented her diva status early with her delivery of Ross’ “Ain’t No Mountain High Enough” and reinforced it with a generous helping of other soulful incarnations throughout the show: Aretha Franklin’s “Respect,” Tina Turner’s “Proud Mary,” and even Janis Joplin’s ironic, twangy “Mercedes-Benz” and wailing “Summertime.” She nailed them all.

The Legends series, which originated 13 years ago as an annual fundraiser for the SLO Little Theatre, has historically told the life story, through song and dance, of one dead rock‘n’roll legend or another. Director Mary Meserve-Miller inadvertently kicked off the series when she proposed a tribute show to Frank Sinatra following his death in the spring of 1998. Love, Old Blue Eyes proved a success, and musical tributes to Judy Garland, Nat King Cole, Roy Orbison, Johnny Cash, and Elvis followed in quick succession. The show has since moved to Arroyo Grande’s Clark Center. Recent productions, rather than focusing on one person’s life, have switched to more of a “greatest hits” format. Last winter saw a “Best of” performance, and this summer’s offering, Viva la Diva, is all about the past century’s greatest divas—young and old, male and female. A short biographical slide show precedes each performer’s entrance. 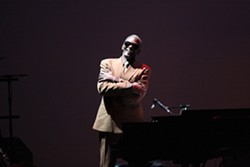 Legends regular Roy Henry reappeared as Ray Charles, lending his effortlessly sultry voice to pieces like “Cryin’ Time” and “Shake Your Tail Feather.” By the time Josh Feldman, as Jimi, broke into “The Wind Cried Mary” and “Foxy Lady,” I was enchanted.

An ’80s medley will also be on the lineup, Meserve-Miller explained, seeing my indignation over the seeming exclusion of Madonna and Michael Jackson from a show about divas. However, technical issues prevented the corresponding video from being played at the show’s opening weekend.

While Viva la Diva sticks to a general timeline, directors have grouped certain performances together based on common threads, like the triumvirate of tragedy that was Jimi, Jim, and Janis—all of them volatile geniuses, all of them dead at 27.

Elton John, Lady Gaga, and Freddie Mercury round out the show, all of them connected, we learn, in unexpected ways. Mercury’s theatricality heavily influenced Gaga, for instance, who took her name from the Queen song “Radio Gaga.”

Co-creator and choreography director Suzy Miller’s influence is heavily felt in the show’s painstaking, clean presentation. Robyn Metchik executive produces, and costume designer Mary Barrette’s scores of getups, especially the Gaga monstrosity she built for Cadence Mitchell’s performance of “Bad Romance,” are highly ambitious for a show put together on a limited budget.

“It’s not Macbeth,” shrugs Meserve-Miller, “but it’s nice to have somewhere you can go where you can just escape into song and dance.”

I admit it was fun to escape into the past, though I might be too young to truly belong there. When I’m 64, who knows? Perhaps I will crowd into some adorable community theater to watch some gangly African-American youth with sparkly dollar signs around his neck lope onstage singing “Drop it like it’s hot,” preceded naturally by a PowerPoint encapsulating in less than five minutes the life and times of Snoop Dogg, and feel those first euphoric pangs of nostalgia.