There are a lot of opening lines in this story.

From a police report, written Aug. 13 by SLOPD officer Joshua Walsh: “I was dispatched to a 911 hang up call when I was nearly struck by [suspect] Karen VELIE.” 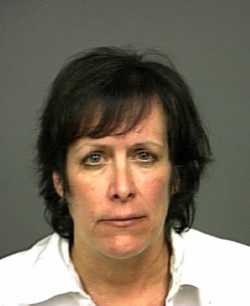 From Velie’s own news website, published Aug. 20: “CalCoastNews reporter and co-founder Karen Velie was taken into custody on Aug. 13 after a San Luis Obispo police officer arrested her on suspicion of driving under the influence. Officer Josh Walsh placed Velie under arrest after her blood alcohol test showed a .06. California’s drunk driving laws require an arrest if a driver has a .08 alcohol level.”

From the synopsis of a podcast on Dave Congalton’s KVEC talk show about a week after the arrest: “Reporter Karen Velie responds to recent attacks on her personal life.”

From CalCoastNews commenter “JordanJ,” responding to other posts on the site on Aug. 21: “… I hope she f***ing sues them for harassment and false arrest / imprisonment. Oh yeah and public humiliation. Did you read the tentative ruling from LaBarbara about public figures and proving malice? This arrest was done with clear malice. Not everything has come out yet, check this cops phone and see who he called over the next 12 hours. I know somebody he called and why he called them. What a vindictive, trouble making a-hole.”

From a city memorandum, written by SLOPD chief Stephen Gesell on Aug. 23: “Following of [sic] an appearance by Karen Velie on a radio talk show during which she openly discussed her recent arrest for Driving Under the Influence we have received inquiries about the facts surrounding her arrest. In response to those inquiries the following information has been compiled.”

And the words just keep coming in what, for most anyone else pulled over for a suspected DUI in San Luis Obispo, would likely have been a routine proceeding.

In case it wasn’t clear from the string of quotes listed above, Karen Velie—former New Times writer and co-founder of and writer for the controversial CalCoastNews website—was arrested on suspicion of driving under the influence on Aug. 13. In the days since, her website published a story that links the arrest and its aftermath to CalCoastNews’ recent reporting activities, attributing fallout to SLO County Supervisor Adam Hill and CAPSLO Homeless Services Director Dee Torres.

Arresting officer Walsh states in his police report that he initiated the stop after he had to hit his brakes to avoid a collision with Velie, who was merging into his lane on Foothill Boulevard in San Luis Obispo.

“She said she was coming from teaching bridge and she received a call on her cell phone and she didn’t want to drive while talking on the phone,” Walsh wrote. “I confirmed with her that she knew my vehicle was next to her vehicle since she was stopped at the light next to me. She said she was aware, but she wanted to hurry and pull over in the liquor store parking lot to answer her call.”

Velie has since alleged that during the stop, Walsh called his supervisor—policy, she claimed, if the suspect is a public figure or official—then told her he would arrest her even if she blew a .01 BAC on the field breath test. There’s no mention of such a call or statement in the report, though the paperwork notes that Sgt. Jeff Booth arrived after the initial contact and remained at the scene for the duration of the incident.

Walsh stated he noticed slurred speech and asked Velie if she had anything in her mouth, to which she replied she has a thrust tongue: “She explained that this is a large tongue and she can touch her nose with it.” He then began putting her through several sobriety tests, noting “a lack of smooth pursuit in both eyes,” unsteady balance, and her swaying from side to side. During the physical test portion, she stumbled while walking and made other mistakes, according to the report.

During a one-leg stand, Walsh noted in particular, she appeared to be losing her balance, grabbed a street sign, then stopped the test before it was over. Next came a Preliminary Alcohol Screening—a breath test she reportedly agreed to take. Walsh said he explained how to blow into the device, but she repeatedly failed to work it properly: “There were approximately 7 breath attempts before she would provide enough breath to register a reading. It was very clear she was delaying the test to allow her BAC to metabolize as much alcohol as possible before taking the test.”

Velie finally gave a generous enough puff to get a reading.

SLOPD Capt. Chris Staley later told New Times that there are two “sections” in DUI arrests. If an officer assesses a suspect to be “under the influence” or “impaired”—regardless of a higher or lower blood-alcohol content percentage—the case falls under “Section A.” Someone who has a BAC of .08 or more is considered “Section B” regardless of the physical field test results, and drivers are frequently arrested under both sections.

Velie was arrested under Section A.

Walsh reported that Velie, once at the police station—and after two more breath tests, registering .07 and .06—requested a phone call, which he didn’t have to allow, but did.

“When she placed her phone call, she began yelling at the recipient that she was falsely arrested and said her BAC was only a .06%. She then said she was also arrested solely because of her enlarged tongue,” his report reads. “I then interrupted her and I told her that the majority of the things she was saying were factually false. I told her I could explain to her why I did everything I did and she said she was not interested.”

New Times learned about the arrest on Aug. 21, and sent an e-mail to Velie on Aug. 22 seeking comment as part of an information-gathering effort to determine how—and whether—to proceed with the information.

She responded with a brief e-mail that offered no comment on her arrest, but referred the inquiry to CalCoastNews editor Bill Loving, who dodged direct questioning about the decision to post the story and its conspiracy claims.

Within hours of New Times’ request, CalCoastNews’ Josh Friedman and Dan Blackburn published a story about the incident—and its aftermath—on the website, stating Velie was arrested “after her blood alcohol test showed a .06.” The accompanying photograph was of officer Walsh.

The story quoted a local lawyer and a doctor in Velie’s defense; both had attended a bridge class she finished teaching prior to the arrest and stated that she didn’t appear inebriated. Lawyer Stew Jenkins is quoted as saying he only saw her drink one glass of wine. The police report notes Velie said she told Walsh she’d had two “big” glasses.

In an appearance later that afternoon on Congalton’s KVEC show, Velie admitted to drinking a couple glasses of wine over a three-hour period before the arrest and to not doing well on the physical tests administered to determine a DUI.

Velie and writer Friedman commented that the arrest—and its subsequent back-channel reporting to local movers and shakers—came in the midst of a number of attacks made on the website by its critics.

Velie stated, “[San Luis Obispo Police Chief Stephen] Gesell has said publicly that he believes that I’m out to get him.”

Congalton later asked whether she believed she was targeted.

“… I believe I was arrested because of who I am,” Velie replied.

Congalton later said: “Someone is clearly trying to embarrass Karen in the eyes of the local opinion makers.”

In the following 24 hours, people began criticizing officer Walsh in CalCoastNews’ comments section. “PaulJones” opined that the arrest would bring on a lawsuit: “This bullshit arbitrary arrest and subjective reasoning is just that, it’s bullshit.” Another poster, “Jorge Estrada,” wrote: “Are the city cops going to arrest the masses on a Saturday evening or just wrongfully humiliate Ms Velie out of retaliation for her job of being the messenger?”

New Times obtained a city memorandum on Aug. 23, issued in response to Velie’s appearance on Congalton’s show and requests to the department for more information about the incident. The memo, from Chief Gesell via City Manager Katie Lichtig, denies Velie’s suspicions—specifically that she was targeted.

“Prior to the traffic stop, Officer Walsh had no knowledge of the driver’s identity and the white pickup driven by Ms. Velie was not registered in her name,” it reads.

“During Officer Walsh’s contact with Ms. Velie, he observed objective indications of alcohol intoxication, including slurred speech, bloodshot and watery eyes and an odor of alcoholic beverage consumption, which led him to believe she was driving impaired,” it continues. “Based on physical observations and the unsafe driving maneuver that nearly resulted in a collision with the officer’s vehicle, Officer Walsh determined further DUI investigation was appropriate. The investigation included a series of standardized questions and physical tests to evaluate Ms. Velie’s level of comprehension, balance and coordination to help evaluate her level of impairment. Based on Ms. Velie’s answers to questions and her poor performance on the field tests, Ofc. Walsh concluded Ms. Velie was driving while impaired.”

The memo goes on to state that once in custody, Velie took a breath test on an evidentiary machine—again requiring multiple tries despite being instructed on proper technique, per the police report—reportedly blowing a .07, then a .06.

“With my experience of these breath test machines, it really depends on how much a person blows on the machine,” Capt. Staley told New Times. “Deep lung air is what it’s measuring. If they don’t blow equally hard, that can account for the discrepancy.”

The memo indicates Velie was first stopped at approximately 9:45 p.m. and was administered the last legal breath test at 10:41 p.m.

In his memo, Gesell explained that Officer Walsh reasonably believed the evidence he observed supported a conclusion that Velie was impaired and that her continued operation of her vehicle could result in a public safety concern.

“To allow an obviously impaired driver to continue to operate a vehicle would have been both unsafe and irresponsible,” the memo reads. “It has been the standard protocol for SLOPD to arrest and book into county jail individuals under the circumstances present here.”

As for others named in the suspected conspiracy?

“I have to honestly say that this is so ludicrous it’s provided Dee and I with an epiphany that we’ve allowed ourselves to be terrorized by these people for over a year now,” Hill told New Times. “It’s provided us with a certain level of relief because it’s so unbelievably dumb.

The arrest report notes that an in-car video was booked into evidence. New Times has requested this video, but hadn’t heard back from the department as of press time.

An arraignment in Velie’s case is set for Sept. 16.

To see CalCoastNews' original story on the incident visit here.