Just like magic: Fly off on that broom to LA and visit Hogwarts

It’s Saturday, March 11, and a few friends and myself are finally getting as close as one can to actually going to Hogwarts School of Witchcraft and Wizardry. The sun is shining down on us and the lines are moving at a good clip at Universal Studios Hollywood. Finally we’re through the main gates and a quick walk later I’m standing in front of a Hogsmeade sign that warns me to mind the spell limits. I audibly squeal out loud in delight. I was about 9 years old when the first few Harry Potter books came out. I read each and every single one of them, saw all of the movies, and dressed up as Hermione one year for Halloween. Luckily, my friends are just as nerdy as I am. 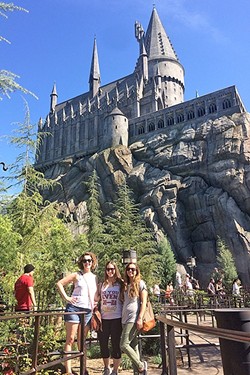 The first part of the world is modeled after a picturesque English village with small brick buildings, snow-adorned roofs, and cobblestone streets. This is Hogsmeade Village and Diagon Alley, where one can find such wonders as Honeyduke’s (all the chocolate frogs you can eat) and Ollivander’s Wand Shop.

A stand selling butterbeer (the beverage that Harry, Ron, and Hermione are always sipping while figuring out how to save wizardkind) immediately catches my eye and we make a pit stop. Since this is an amusement park, I’m pleasantly surprised that the beverage doesn’t cost double digits. Butterbeer comes chilled or frozen, and I’m delighted to find it tastes like cream soda/butterscotch on steroids topped with the creamiest foam. I’m already feeling the magic.

We opt to get in line for the Flight of the Hippogriff ride since the line for Hogwarts or the Harry Potter and the Forbidden Journey ride is almost two hours long (Pro tip: best time for the shortest line for the castle is 5 or 6 p.m. or about 30 minutes before the park closes). While the line moves quickly and the ride features an awesome animatronic version of the hippogriff Buckbeak, the coaster ride is disappointingly short and lasts maybe five minutes, tops. 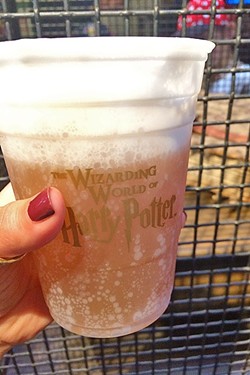 After lunch in City Walk, we regroup and briefly listen to the impressive Frog Choir (made up of Hogwarts Students and enchanted singing frogs) before hopping in line at Hogwarts, which sits majestically on a hill and is reminiscent of an old, stone Scottish castle. The wait is down to 90 minutes now, and as we move up through the line, the time spent in line doubles as a tour of parts of the school like the greenhouse where students practice herbology and Dumbledore’s office with talking portraits of past headmasters and teachers. A ride attendant is overheard telling a guest that the experience is akin to Disneyland’s Haunted Mansion.

Finally, it’s our group’s turn! The ride has you sitting upright, four people across, but it shifts so you’re lying on your back or stomach at different points so you feel like you’re flying. God bless the nerds who made the Harry Potter and the Forbidden Journey ride. With a combination of actual moving pieces like the Womping Willow tree, old video of the Harry Potter actors, and virtual reality images like a roaring crowd at a quidditch match, you actually feel like you’re soaring through the Harry Potter world. I’m so happy that the tears are nearly spilling out of my eyes. Then, suddenly Dumbledore commends us for our bravery and says we’re welcome back at Hogwarts any time. The sun shines extra bright as we blink and exit the castle. You can bet I’ll be back.