The thief came to the creekside entrance of Mission Mall, located in the 700 block of Higuera Street, then cut through the metal gate before proceeding to Just Looking Gallery at the opposite end. At 3:18 a.m. on Sept. 14, an unknown art enthusiast broke one of the gallery's large window and stole a single Patrick Nagel print.

Police responded minutes later to the wailing alarm, but didn't 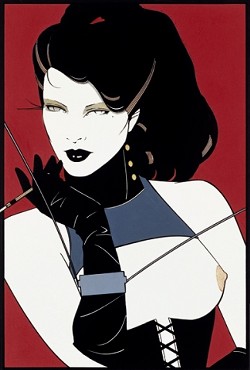 # know what was missing until the gallery's owner, Ralph Gorton, arrived and couldn't find a 16-by-23-inch print of a black-leather-clad woman with one breast exposed.

The print was valued at $900 relatively inexpensive compared to some of the original paintings showing at the gallery but Gorton believed that the thief knew just what he was looking for.

SLO police Lt. Steve Tolley said that no fingerprints were recovered, and the department has no evidence that points to a suspect, though an investigation is ongoing.

Gorton said that although Nagel died in 1983, his iconic images have remained popular.