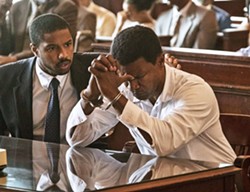 Just Mercy is one of several films about American racism that have been made available to the public for free.

Co-written and directed by Destin Daniel Cretton (The Glass Castle) based on the autobiographical book by attorney Bryan Stevenson (Michael B. Jordan), it focuses on Stevenson's work on freeing death row inmates, in particular the case of Walter "Johnny D" McMillian (Jamie Foxx), who was wrongly convicted of the murder of an 18-year-old white woman.

It's an infuriating account of so-called Southern Justice, and one of the most obviously egregious travesties of our criminal justice system ever discovered. It also depicts the helplessness of people of color in the face of a white power structure, and it also questions the validity of capital punishment as a criminal penalty. (137 min.) Δ