Bryan Brady should have turned 23 this month.

The Paso Robles resident died tragically two years ago on the night of his 21st birthday. And for those two years, the investigators handling the case have stuck with the same conclusion: It was an accident. 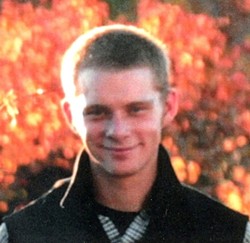 Here are a few reasons why many people still don’t think it was an accident:

• The location of his body indicated that Brady was walking away from home rather than toward it.

• He was in several fights the night of his death and was reportedly knocked unconscious.

• According to various sources, some people in Paso Robles have been going around bragging that they killed Brady.

Actually, police first determined that Brady had killed himself, based on several witness accounts. But they later cast aside that theory and replaced it with a new explanation that Brady either tripped and fell on the tracks or fell asleep there.

Though the cause of death remains unchanged, a new team of investigators is gearing up to take another look at the facts surrounding Brady’s death. With investigators from the San Luis Obispo County Sheriff’s Department taking the lead, the Brady case is about to get a new set of eyes.

Paso Robles interim Police Chief Robert Burton recently asked the sheriff and District Attorney’s Office to re-review the case. Burton said he was approached by Brady’s parents, who asked for “a fresh set of eyes.”

“I suggested we could ask the Sheriff’s Office and District Attorney to review the case,” Burton said in an e-mail to New Times. “The Bradys agreed with this suggestion and I called to see if the Sheriff and DA would be willing to assist the Paso Robles Police Department. Both agencies agreed to assist and we plan to meet soon to review the entire case.”

Burton took over for former police chief Lisa Solomon, who resigned in March amid allegations of inappropriate behavior.

Cmdr. Ron Hastie with the Sheriff’s Department said the various agencies will meet soon to review the case, but he noted that it’s very early in the process and no one has yet talked about reclassifying the case as anything other than an accident.

“I think it’s just a review and a determination as to whether or not there’s additional work that can be done,” Hastie said. “Obviously we’re charged, as law enforcement, with finding out what happened.”

Even if the determination of the cause of death remains—that it was an accident—Hastie said the goal would be to better understand what led Brady to end up on the tracks.

Investigators from the District Attorney’s Office will also assist as needed in the revamped investigation. Office spokesman Jerret Gran said it’s not uncommon for the DA to re-review such cases.

The Bradys never bought the original explanation of their son’s death. They hired a private investigator who doubled up on previous interviews and developed his own report. Not only do the Bradys now believe their son’s death was no accident, they think they know who was behind it.

“At this point in time, we don’t know where the review will take us,” Don Brady, a Paso Robles vintner and Bryan’s father, said in an e-mail.

Part of the reason the Bradys and Bryan’s friends have trouble buying the accidental-death scenario was that he reportedly was involved in two fights the night before and was knocked unconscious at least once. In fact, the Bradys sued the bar Bryan patronized the night before his death, alleging wrongful death and negligence. That case is still working its way through the Paso Robles Superior Court.

According to witness statements in police records, Brady was involved in a fight with about five Hispanic males, some of whom a bar employee thought were members of Paso’s oldest gang, the Paso Robles 13—or PR 13—because some had the number 13 tattooed on the backs of their necks. All of the fighters were kicked out of the bar and witnesses told police they saw Brady lying on the ground outside unconscious for about three to five minutes.

Brady’s body was later found on the Union Pacific tracks that cut through downtown Paso Robles. He was lying on the tracks when the train hit him about 6:15 a.m., but the last time anyone reported seeing him was at about 3 a.m. And his body was found farther north than it should have been. It wasn’t uncommon for Brady to walk along the tracks on his way from downtown to his parents’ house. But if he was, in fact, heading home that night, he likely would have headed south rather than north of the bar, where his body was found.

July 31 would be Brady’s 23rd birthday, if he were still alive. Following Brady’s death, his friends and family started a Facebook group, “Justice for Bryan Brady,” which aims to “raise awareness about the injustice of his unsolved case and to inform the public who he truly was … .” The group has scheduled a celebration for Brady it’s calling “BRADYGADE.”

According to chief Burton, “If new investigative leads are uncovered, we will work together to ensure this case is thoroughly investigated. And that’s about all I have at the moment.”