Justification? It's not the first time Justin Vineyards cleared 100 acres of oak trees in Paso Robles

Five years ago, Justin Vineyards and Winery cleared several acres of native oak woodlands, but there were no aerial photographs to go viral and there wasn’t massive public outrage to stop them in their tracks.

After the trees were cut in 2011, the contractor the company hired for the job sued Justin for breach of contract. That suit sheds light on how the company—currently under fire from locals after a massive clear-cut of native oak woodlands on the Sleepy Farm Road property near Willow Creek Road—expanded its vineyard operations since being purchased by The Wonderful Company in 2010. 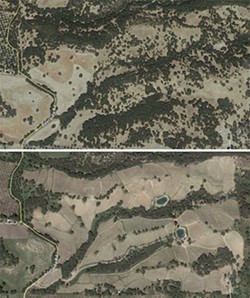 In 2011, the company hired Keith Garl’s A-1 Tree Service in Nipomo to clear 100 acres of trees from their 240-acre Adelaida Hills property near Adelaida Road and Chimney Rock Road. Court records indicate, Garl’s company cut down approximately 17,000 native trees—15,000 of them oaks.

According to the 2012 lawsuit, Garl sued Justin Vineyards for damages and breach of contract after vineyard manager Paul Kaselionis fired Garl mid-job. Garl originally quoted $540,000 to cut and process the trees from the Adelaida Hills property. Kaselionis expressed that he had no interest in the wood or its value, and Garl offered to do the job for $200,000—which would only cover labor and equipment costs—if he could take the wood and market it. The two signed a contract on Aug. 2, 2011.

Halfway through the job and right after Garl’s crew cut the trees but hadn’t yet hauled them off, Kaselionis called Garl and fired him.

“I believe his words were ‘pack up your shit and get it out of here. I don’t want you on my job anymore. Get your equipment and move it,’” Garl said in a deposition.

The lawsuit originally sought more than $23.6 million in damages, including interest and $140,000 in outstanding payments because before the lawsuit, Justin Vineyards had only paid Garl $66,300.36, the first of three agreed-upon installments. The rest was to cover lost profit Garl would have allegedly made on the wood after custom milling it.

Justin Vineyards, represented by the parent company’s in-house law firm Roll Law Group, unsuccessfully counter-sued Garl for attorney’s fees and the $482,736.50 it cost to have subcontractors clear the wood.

As far as the recent tree clearance on Sleepy Farm Road, county documents show Kaselionis took the lead on the project, but it’s not clear if the higher-ups knew his plans, nor whether the company knew those plans would violate a county grading ordinance. A June 24 statement from Wonderful Company owners Lynda and Stewart Resnick suggest that the tree clearance was the result of “absolutely unacceptable lapses of judgment” by their “local team.”

Justin Vineyards was founded in 1981 and became one of the area’s best-known labels. The company was acquired in late-2010 by Roll Global subsidiary Fiji Water LLC (Roll Global was renamed The Wonderful Company in 2015). Months after being purchased, the company began buying additional properties to plant vineyards, including the Adelaida Hills property and the 742-acre Hartham Ranch property east of Templeton. The 375-acre Sleepy Farm Road property was purchased in 2015.

Court records and Google Earth satellite imagery indicate oak tree removal on all of the company’s west Paso properties since 2011. Andrew Brown General Engineering Inc., or ABI, did grading work for the company on several of those sites. Deposition from the 2012 lawsuit described owner Andy Brown as “business friends” and a “close friend” to Kaselionis, and claimed the winery made up 60 percent of all of Brown’s business at the time. Brown did not return calls for comment.

Currently, there are no laws in SLO County explicitly prohibiting tree removal in unincorporated areas. However, the recent controversy has caused a push for new laws (the issue will be before the SLO County Board of Supervisors at a special July 15 meeting). The 2012 lawsuit did not address whether the tree clearance was appropriate.

After the public backlash following the Sleepy Farm Road clear cutting, Justin Vineyards has abandoned plans to plant a vineyard at the property.

“We have removed trees in the past, and while that work was legal, after our recent review of the Sleepy Farm Road project and subsequent internal discussions about our operations, we have decided to permanently discontinue this practice moving forward,” Clark wrote in an email to New Times. “We are committed to being a better member of the North County community ... and we hope the community will give us the chance to make good on that commitment.”