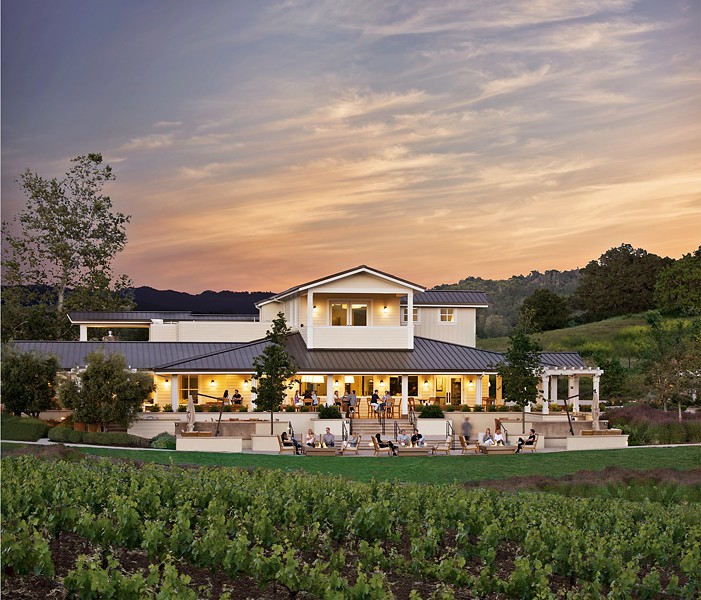 Photo Courtesy Of Justin Vineyard & Winery WHAT YOU'RE MISSING Although you may not be able to visit Justin Winery's tasting room right now, you can participate in a virtual one by ordering wine, which will be sent to your doorstep.

Learn more about how you can taste with Justin Baldwin by finding Justin Vineyard & Winery on Facebook or Instagram and visiting the winery’s new Virtual Tastings webpage. You can schedule your own private session—although it might not be with Baldwin—by going to justinwine.com and hovering over the “Visit” tab.

I wasn't sure if the wine would make it in time. But there it was, delivered to my doorstep by a UPS driver in a cloth mask who hammered my window with his fist.

"Sweet!" I thought, as I walked over to the door.

I opened it a crack, asking if he need me for anything. He waved and turned away, telling me he just needed to be sure someone was there to deliver the package to.

A Styrofoam six-pack carrier stared at me as I lifted the cardboard box's lid. It's like Christmas every time I get to open something delivered to my front step. It makes me happy in a giddy sort of way, even though I already know what's inside each box, because I ordered it.

In this case, though, Justin Vineyard & Winery sent this little trio of joy my way.

Squiggling off the top piece of Styrofoam, three bottle tops willed me to pull them out of their safety net. With little white pieces of foam still clinging to them, I put the 2019 sauvignon blanc, 2017 Trilateral, and 2017 Reserve Malbec on the table, excited for the next day, when I would crack them all and listen to winery founder Justin Baldwin talk about them via Instagram Live.

The wine is from the same Justin Winery that had the oak tree fiasco in 2016. But it's been four years and the wine is good, so I figured it was time for second chances. I said yes to the tasting offered up by Justin Winery PR and Events Coordinator Miranda Kertzman—although I waited until three days before the virtual tasting was scheduled. Lucky for me, Kertzman is on top of things and got me the wine lickety-split! 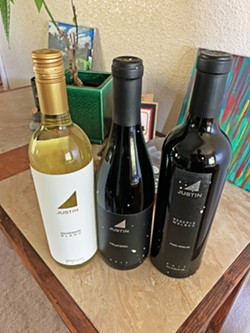 "While it's not the typical tasting room, we've embraced the virtual tasting format via both Instagram Live and private video where Justin Baldwin along with our team of wine educators continue to share personal stories and in-depth tasting notes for wines across the portfolio," Kertzman said. "So far we've had great feedback and have enjoyed watching how these platforms are keeping us connected with existing customers, while also building a new community of Justin fans."

While everyone is looking forward to things getting back to normal, Kertzman said, keeping in touch with Justin Wine Society members, guests, and fans is one of the winery's main priorities during the pandemic.

I couldn't figure out how to get my television to mirror my iPhone so I could sit back and watch the tasting. Instead I propped Baldwin's little face up against a bag of rye chips on my kitchen table, behind an array of cheeses, salami, olives, and crackers. You can't really taste wine without food, which I'm going to interpret as one of Baldwin's founding tenants.

He said he wanted to make good wine at a decent price point that would enhance the dining experience. And true to Justin form, the winery listed off all of the good things that would accompany the tasting, including recipes for avocado and citrus salad (sauv blanc), pork tenderloin slices with cherry glaze (Trilateral), and roasted potatoes with a red pepper sauce (malbec).

"Now this is all about fun," Baldwin said as the tasting stream started. "I have to admit, I'm a little ahead of you. I've had a couple, two or three sips, of the sauvignon blanc."

He was sitting in his beautiful kitchen in Oregon with three glasses of already poured tasters in front of him. Baldwin recommended that we—myself and the approximately 700 to 800 people from around the world who were also tuned in to Justin Winery's Instagram Live feed—get those wines poured if we hadn't already. That red wine has to breathe, you know.

Before we got our sips in, though, Baldwin let everyone know what was going on at the winery.

"Even though you may be at home and have been, like I have been, maybe for too long ... and have been going stir-crazy," he said. "The winery is going full-tilt. The vineyard and our winery people are out there doing what they need to do."

The winery just finished taking inventory of the 2019 wines to figure out which ones were showing better than others; which ones need more time, more work; and how to blend some of them. The flagship Isosceles and Isosceles Reserve blends of cabernet sauvignon, cabernet franc, and merlot, for instance, are getting mixed and tasted at this time of year.

Bottling is also on the winery's current to-do list, including the 2018 harvest of cabernet sauvignon.

"It's the most expressive wine of Paso Robles that we make. It's the backbone of most of the wines we make," he said, adding that we weren't tasting it tonight but that it's the most planted grape in the world.

Plus, Baldwin said, Justin cabernet sauvignon is the top-selling cab across the U.S. priced at $20 or more, which is rather jaw-dropping. The little winery he founded in Paso at the end of a dead-end dirt road in 1981 now produces wine that's sold all over the nation—which was evident by people who were tuned in from across the United States. One person even said they were in Botswana.

"We are very proud of that, and we are bottling more of it as I speak," he said.

To prevent mildew from spoiling the current crop, pruners are shoot-thinning to take out extra growth beneath the canopy, he said, to ensure that air flows through the vines and keep that sun shining on the leaves. Vineyard workers are also counting the clusters to work out how big the harvest for 2020 will be so the winery can ensure they have enough barrels and tank space to accommodate what gets picked in October/November.

But back to the important stuff. Sipping that wine.

Starting with the sauvignon blanc, which pairs fabulously with honey and goat cheese (seriously, it's really good), Baldwin's microphone caught him swishing that wine all over his mouth, sucking it across the tongue and pushing it into the cheeks to pull some air into it. Tasting notes include honeydew melon and the tang of citrus.

"Excuse all the swishings around, but I wanted to get as much on the palate as I possibly can," he said.

Baldwin called the wine an homage to Bill Preston, who brought sauvignon blanc into Justin's vineyard. The 2018 vintage that we were drinking was Preston's biggest and last harvest, Baldwin said.

Moving on to the Trilateral, a blend of syrah, grenache, and mourvedre (starting with the grape that makes up the highest percentage of the blend), he told tasters that really you're looking for the fat content of the food that matches the alcohol, body, and mouth feel of the wine.

After more sniffing and swishing, he asked us whether we knew there were 1,000 wineries in California before Prohibition.

"And then what happened? Prohibition. I knew you were going to say that," he said with a laugh. Δ