If you want something awesome to happen, sometimes you have to do it yourself.

Three years ago, Carver Cordes—former KCPR DJ, music lover, and concert impresario—started the KCPR Fall Flood Festival, a series of concerts highlighting local and regional acts with connections to the local college station. It acted as a reunion of former DJs as well as a hipster’s nostalgic dream—tons of under-the-radar indie bands that marked each concertgoer as deeply in-the-know.

Now it’s back again, starting with a three-band show at SLO Brew this Friday, Oct. 25 (7:30 p.m.; all ages; $10 presale or $12 at the door), that features eclectic headliner Próxima Parada, a quartet of former Cal Poly students whose sound bounces from jazz to blues to folk to anywhere else they feel like going. The middle act is The Monroe, which won Best R&B song as well as Best Live Performance at the New Times Music Awards earlier this year. Soulful and able to traverse territory from rock to ska to gospel to folk, this is a band that’s sure to please any music fan. Opening the show will be Pat Bang & Daniel Coxon of the Riot Professor from Oakland.

If you feel like getting off the beaten path, you can head to The Compound (If you don’t know where that is, find a hipster and ask … this show is underground, baby!) on Friday, Oct. 25 (8 p.m.; all ages), to hear Troller and SSLEEPERHOLD, both from Austin, Texas. Paperman and Some Ember (featuring Dylan Travis, formerly of Man/Miracle) will open this show.

On Saturday, Oct. 26, the fun continues when alt-folk juggernaut Little Wings (aka—Kyle Field) plays live on the Biba Pickles Variety Hour on KCPR 91.3FM at 4 p.m. (Can’t pick up the station? Tune in at kcpr.org). Later that night, at 6:30 p.m., Little Wings plays an all-ages show in Kreuzberg that also includes Quinn DeVeaux doing a solo acoustic set, a reunion show with the Black Shirts (featuring Kenny and Tasia from Ghostporn), and Lady Lazarus (check out their new album, All My Love in Half Light).

“We’re going to be selling raffle tickets at these shows to raise money for the nonprofits,” Cordes said. “One of the prizes will be a set of those pricey noise-canceling headphones supplied by Beat by Dre. For exact set times and other announcements about the fest, folks can like and follow us on Facebook: facebook.com/Fall.Flood.Festival. Once again, it's all about the music and all heart. This is our third annual festival, and any proceeds after covering costs for touring musicians will be split between [several] local established and aspiring nonprofits.

“The first is KCPR, who will also be hosting some live performances during the weekend. They’re now tuning into the campus station at the U.U. on the Cal Poly campus during business hours, exposing lots of folks to all the great new music they play ...

“[Another] is the Oceano Community Farmers Market. Oceano is my hometown and has a long history as an agricultural community, but of the 22 communities and cities in SLO County, it’s one of the few unincorporated cities that does not have its own farmers market. Many local farmers get crowded out of the bigger markets in favor of larger vendors from other parts of the state. I’ve pledged one-year, five-year, and lifetime passes to the Fall Flood Festival as premiums for their Kickstarter campaign, and we’ll be holding fundraising raffles for the effort at the shows (kickstarter.com/projects/1966170751/oceano-community-farmers-market).”

Hipsters, start your engines! This is going to be a killer weekend! 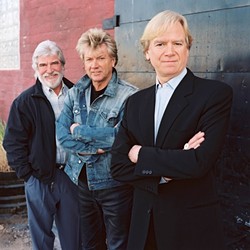 The end is near for the inaugural season of the swank new North County venue dubbed the Vina Robles Amphitheatre, with just two shows remaining, starting this Friday, Oct. 25, with ripping instrumental guitar icon Joe Satriani (7:30 p.m.; all ages; $38.50 to $68.50) on his Unstoppable Momentum Tour 2013 with opening act Living Colour. Satriani is a multiple Grammy Award nominee who rolled into the spotlight in 1988 when Mick Jagger recruited him to play lead guitar on Jagger’s first solo tour. If you like amazing guitar rock—and who doesn’t?—this is a must-see show.

Personally, I’m a little more excited about the final show of the season, An Evening with The Moody Blues on Tuesday, Oct. 29 (8 p.m.; all ages; $38.50 to $88.50). The English rock band started on Decca Records in 1964 (first hit “Go Now”; No. 10, 1965, a classic Merseybeat ballad) and established themselves as groundbreakers when they fused rock and classical music on their 1967 album Days of Future Passed.

Some critics have labeled their music pretentious and bombastic, but it’s hard not to be blown away by a song like “Nights in White Satin,” whose full sound almost makes you forget the song’s obtuse lyrics: Impassioned lovers/ Wrestle as one/ Lonely man cries for love/ And has none/ New mother picks up / And suckles her son/ Senior citizens/ Wish they were young.

The core group features Graeme Edge from the original 1964 line-up as well as Justin Hayward and John Lodge, who’ve been with the band since 1967. Now well into their fourth decade together, this is a band with incredible history, which has now been chronicled in a new definitive, career-spanning collection, Timeless Flight, a box set released in June in both 17-disc and four-CD configurations. The 17-disc set is housed in an LP-sized hardbound slipcase and includes 11 CDs of digitally re-mastered album tracks, previously unreleased mixes and outtakes, and complete concert recordings. It also includes three DVDs of rare television performances, promotional videos, and a previously unreleased concert film; in addition to three DVD-Audio discs of long out-of-print 5.1 album mixes, a 120-page hardback collector’s book, faithful reproductions of Moody Blues memorabilia, and more is included. For the less hardcore fan, there’s a four-CD boxed anthology.

The Moody Blues are living rock history, a band as storied as any, and seeing them in Vina Robles should be pretty sweet. The number of stadiums they’ve filled over the years is no doubt uncountable.

Every year since 1976, Pismo Beach has become a magnet for jazz bands that descend on the famed community for a three-day festival of big band, swing, and Dixieland jazz affectionately billed as Jubilee by the Sea, and it’s happening again this Friday, Oct. 25, through Sunday, Oct. 27, at five different venues (Pismo Vets Hall, Marie Callender’s banquet room, “on the beach” in the parking lot of Addie Street, and Turk’s Place and Lu’s Landing at St. Anthony’s Fair Grounds).

There are way too many concerts and bands to list here (visit pismojazz.com for a schedule), but some highlights include the Midiri Brothers, Red Skunk, the Creole Syncopators, the Dos Pueblos Big Band, the Royal Garden Swing Orchestra, Blue Street, and Chop Suey.

All Event and single day tickets are available. You can e-mail orders to  sandysmallwood@charter.net, or call 773-3750 or 481-7840. Buses run continuously to get you to all of the venues. Locally catered food and drinks are available at all locations. All venues have hardwood floors for your dancing pleasure! All told, you can expect about 120 one-hour performances featuring 20 bands with various guest artists.

This is an all-volunteer effort run by the Basin Street Regulars, who hold monthly Dixieland jazz concerts at the Pismo Vets Hall, and it’s a heckuva good time!

“If you enjoy traditional, classic jazz—the exciting Fats Waller, Louis Armstrong, Jack Teagarden, Benny Goodman Sextet kind that was the most popular music up through the beginning of the Big Band swing era—then you’re in luck,” say organizers. “Pismo Beach is the home of the Basin Street Regulars, probably the finest jazz club in the state!”

Polish up those dancing shoes! 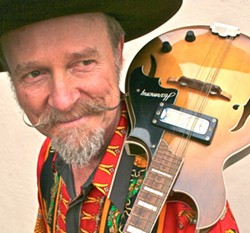 This Friday, Oct. 25, at 7 p.m. in the Alex & Faye Spanos Theatre, the amazing multi-instrumentalist, singer, and award-winning educator Joe Craven will perform an evening of sonic gymnastics. He’s funny, poignant, and musically brilliant! Tickets are $22 ($17.60 for students); call 756-4849.

The buzz is on the street about the Empire of the Sun concert on Saturday, Oct. 26, as part of the Avila Beach Concert at the Cove Series. The Australian electronic music duo headlined a bunch of summer festivals, and now they’ve embarked on an extensive North American headline tour of more intimate venues. Their newest album, On the Dune, is the follow-up to the 2008 BRIT-nominated, global smash Walking on a Dream. “Alive,” the new collection’s first single, rose to No. 1 on Billboard’s Dance/Club Play Songs chart. Basic Vacation will open the show (gates at 5 p.m.; concert at 6 p.m., with tickets available at all Vallitix locations or online at vallitix.com). It’s Halloween weekend, and costumes are encouraged! 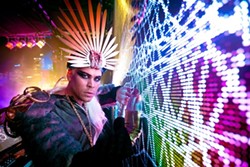 Even though Candye Kane expressly forbid me to write about her ever again, I hope she won’t mind if I tell you about her SLO Blues Society show this Saturday, Oct. 26, at 8 pm., with local opener Back Bay Betty, at the SLO Vets Hall ($20 at the door; 21-and-older). Kane is a big voiced blues singer with a story of triumph over adversity. “Kane’s early life and employment history are legendary,” according to press materials. “She was a teenage mom from the poor side of Los Angeles, it was welfare and food stamps by day, hard drug use and nude modeling by night, while at the same time yodeling alongside groundbreaking punk bands like the Circle Jerks, X and FEAR in Hollywood’s underground music scene.” If you like Etta James-style blues, check her out. 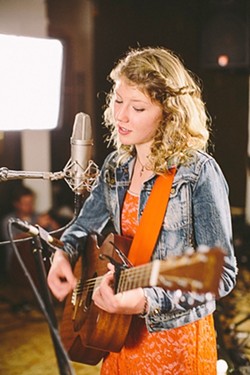 File this one under “the kids are all right!” This Sunday, Oct. 27, in an event being billed as “Fourplay,” four local teenage musical groups will play 30- to 40-minute sets at MoTav starting at 5:30 p.m. with Shea McSorely playing folksy, funky blues. At 6:15, Dasha(one name, like Madonna or Cher or Charo!) plays alternative pop. At 7 p.m., check out Rapstract, hip-hop by James Vergara and Vincent Angelo. The evening closes with an 8 p.m. set of groovy, danceable, comedic jazz by Tangerine Man (Johnny Vergara, Michael Grasseschi, Drew Minnoch, Greg Waddell, and Bardo Novotny). This show promises to restore your faith in humanity and fill you with hope for the future!