Keep calm and cast iron on

My journey into well-seasoned adulthood

Is anything in life really nonstick?

Maybe it's turning 30, but I've become intensely skeptical of any product labeled "easy clean!" I've gotten down to basics and cast off the childish gadgets, given away the George Foreman Grill and the onion dicer.

Because life isn't at all like an "As Seen on T.V. Red Copper 5 Minute Chef Electric Meal Maker."

In that time frame, stuff inevitably gets stuck to the grooves of your heart. But if you live right, you build up a good seasoning. What once stuck so vehemently slides right off.

Something about cast iron always felt like peak adulthood to me. I avoided it until I had no other choice. The tiny cast iron egg pan shoved in the back of my husband's cluttered kitchen cabinet—left over from a long lineage of faceless roommates over the years: This is what finally helped me face my fears.

The pan fit nothing more than two eggs, which, at the time, seemed wasteful, comical.

Covered in a discouraging layer of orange rust, I ignored it, happily gathering our chickens' eggs from the nest outside our patio door and cracking the fresh yolks onto a too-large nonstick aluminum skillet, one that had come with a set of mid-priced cooking tools sealed in a big box filled with packing peanuts and cardboard.

I shudder to think about this now, but I actually used a spatula to make my over-easy breakfast each morning.

Then I got a side job making breakfast at Garden Street Inn in SLO. We went through hundreds of eggs a week, pallets of eggs. I cracked and scrambled and flipped and fried while guests stirred upstairs and the sun rose over the garden, which I could see from a tiny window in the kitchen.

There, I used a small egg pan from Smart & Final, still nonstick aluminum. It fit two eggs, nothing more. Every few months, a new one would appear, and the old one would be dumped in the trash. I finally understood the value of having one tool that does one thing really well. But I wondered if there was a better, more sustainable way.

After leaving my post at the inn, I attempted to keep up my egg chops at home. But something still felt wrong. I couldn't exactly flip the too-big nonstick pan just right.

I'd flick my wrist just so, and the eggs would go flying, tearing their beautiful jammy yolks and inadvertently feeding my dogs.

So, I rummaged through the cabinet and fished out that old rusty little bastard, buried deep behind pie tins and cookie sheets.

I gave the tarnished cast iron a lengthy scrub with too much water, Googled "how to season a cast iron pan," added a little oil, and heated the pan at 375 degrees for an hour.

And now, I am no longer the same person.

I found the heavier weight of this little cast iron treasure so satisfying, and so, so easy to flip. It rendered crispy, browned edges and lush yolks.

Now, any pan that is not cast iron has been relegated to the Goodwill bin, and—in a strange turn of events—I even won a very old, well-seasoned cast iron pan during a drunken game of Secret Santa last month.

I am now the happy owner of three cast iron pans, and each are unique and cherished in my home. Two enameled cast iron Dutch ovens round out the entire family.

I knew that writing about my indoctrination would probably inspire a rash of debate and impassioned advice (after all, isn't owning a cast iron pan as difficult as training a special needs puppy?). Of course, I am too late to the party and everyone is an expert.

Many friends say no soap, some say a little dab will do ya, and still others have suggestions like this: Clean and season using just kosher salt and vegetable oil (no water at all). They swear by stainless steel chain mail or certain brands of sponge. It's not unlike all the differing ideas about how to live a good life.

Despite all the squabbling about how one should cook with, store, season, and wash the stuff, there is something unifying about being part of this motley community. Cast iron unites us. We are independent, quirky, practical, and maybe a little old fashioned. 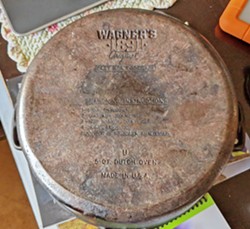 Now, I cook everything in these pans, and it's lit a new fire in my culinary creativity (just ask my husband). It got me thinking: Could cast iron cooking be the secret to a harmonious home? A better marriage? A more fulfilled life? My friend and Avila Beach freelance photographer Michelle C. Torres-Grant might agree with me.

She and her husband, Leonard Grant, have been married for 29 years. They've got about a dozen pots and pans, but one reigns supreme: the 5-quart cast iron Dutch oven. In fact, they've had the Dutch oven for 25 years—nearly as long as they've been wed.

"We use it for frying, sautéing, searing, browning, stewing, pasta sauce, chili, corn bread, Dutch babies—which are like an oven baked pancake—most things, really," Torres-Grant said. "We've always said, 'If we could only keep one cooking pan, that's the one we couldn't live without.'"

Torres-Grant first purchased cast iron when she was pregnant with her oldest child in 1990. The prescribed iron supplements repulsed her to the point of gagging.

"My nutritionist recommended I cook in cast iron as much as possible, especially acidic foods like tomato sauce, because small amounts of iron transfer to the food that the body easily absorbs," she said. "I took her advice, and we've been using cast iron ever since."

Don't so many of us share a similar turning point?

Just as I suspected, the amount of cast iron—or perhaps the lack of cheap disposable cookware—in our cupboards might correlate directly to your level of "adulthood."

It's a wobbly and absurd theory, but hear me out.

Torres-Grant and her hubby tired of well meaning Teflon that would not—or could not—live up to their nonstick promise.

"My family never seemed to consistently follow the guidelines, using metal utensils on it, and using too high heat, which resulted in peeling, staining, and loss of the nonstick quality," Torres-Grant said.

Going through that process now, I can say I totally get it. It's like shedding your skin or finally buying two pairs of the jeans you really like or stocking up on TP before you need it.

Like life, you don't have to be perfect. That's what I realized, finally. You just have to have consistency and dedication.

"We don't keep ours perfectly seasoned," Torres-Grant admits, adding that she just adds a dollop of olive or canola oil before storing to prevent rust spots.

After all, growing up is a process.

"If you mess up you can always scour, re-season, and start over," she said. Δ

Hayley Thomas Cain really really really wants to hear your best Flavor ideas for the New Year. She can be reached at hthomas@newtimesslo.com.