Keep 'em on their toes!

CORE Dance Company's eclectic Rhythms show takes a cue from Karen O, Bob Fosse, and So You Think You Can Dance

During a break at an early morning rehearsal at CORE Dance Company, directors were discussing whether Stacy Estrada’s choreography of the Yeah Yeah Yeahs’ dance anthem “Heads Will Roll”—replete with feigned throat-slashing as Karen O belts “Off, off, off with your head!”—would be appropriate for the company’s next elementary school visit. (Pros discussed: It looks super-cool; kids in San Luis are too sheltered anyway. Cons: Implicit violence, etc.) 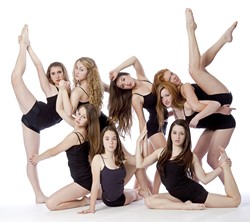 Although Estrada’s stylized decapitations were eventually deemed too macabre for pre-teen audiences, taking young people out of their creative comfort zones is generally encouraged at CORE Dance. Owner/director Leslie Baumberger, when developing the newly formed company’s teaching and performing styles, looked to the popular TV show So You Think You Can Dance for inspiration. She noted how exposure to many different choreographers and dance styles conspired to make what she calls “the whole dancer.”

“They didn’t have this label: tap, ballet, jazz, etc.,” she said. “You saw all this growth on the show because the kids were exposed to other dance styles.”

Of the company’s upcoming performance— which features the work of choreographers Suzy Miller, Drew Silvaggio, Lisa Deyo, and Theresa Slobodnik—Estrada’s sequined, cutthroat dance-off is likely the edgiest. You can catch that piece and many more at the Cal Poly Spanos Theatre the weekend of March 26 and 27, when CORE Dance takes the stage. 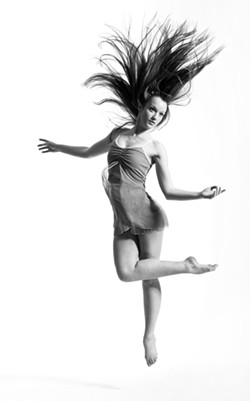 After the break to discuss the elementary school visit, when the rehearsal for Rhythms recommenced, Estrada mused, “Maybe we could get a mannequin head and roll it across the stage at the end … .”

Wes Krukow, who makes a princely appearance in Ballet Theatre SLO’s The Firebird, choreographed another modern jazz number on the program, called “Rolling in the Deep.”

A summery piece by Kelly Allen, set to Florence and the Machine’s hopeful “The Dog Days Are Over,” is just pretty, through and through. Allen, funnily enough, is a former American Dance student who now works in Los Angeles as an assistant choreographer on So You Think You Can Dance.

CORE, probably the newest dance company on the Central Coast, boasts around 53 dancers, plus frequent guests from the Civic Ballet and Ballet Theatre SLO. By incorporating influences from the disparate realms of hip-hop, tap, and jazz, by taking inspiration indiscriminately from both theater and television, the company hopes to create a new crop of “whole” dancers, ready to take on anything.

Think Arts Editor Anna Weltner can dance? Ask her to bust a move at aweltner@newtimesslo.com.