If it seems like Black Crowes front man Chris Robinson was just here a couple weeks ago, that’s because he was. And since I was sick that week and could not see him, it’s like my special wish has come true because he’s back at SLO Brew on Friday, May 20 (8 p.m.; 21-and older; $15), with his new side project The Chris Robinson Brotherhood.

On his website, he says, “Glad tidings, freakers! Just wanted to give you the good word about who’s in The Brotherhood and what our trip is about. First off, the players joining [me] will be Neal Casal on guitar, Adam MacDougall on keyboards, George Sluppick on drums, and Mark ‘Muddy’ Dutton on Bass. We’ll be playing a bunch of new songs I’ve been working on and will be digging deep into what is happening at that musical moment. There will be old stuff that I’ve done and a handful of covers that just feel right. Please come with your good vibes, feel free to trip along with the bouncing ball, or just float away. Remember, we all want great gigs! So if you see California, say Hello. Keep it freaky, CR.”

J. M. “Joey” Orozco spent much of his adult life as road manager for Canned Heat, the iconic blues rock act that’s played with just about any rock act you can think of. Over the years, Orozco always had a camera at the ready, and he’s captured dozens of rock icons’ images.

On Sunday, May 22, from 2 to 8 p.m., at Central Coast Antiques & Collectibles (1610 Main St., Morro Bay), he’s having a reception of images from his upcoming book On the Road, which chronicles his years on tour with Canned Heat. The book features a forward written by Peter Albin of Big Brother and the Holding Co., which says, in part, “One day I visited his home and noticed some of the photos on the wall. ‘Hey Joey,’ I said. ‘You have a great collection of photographs. Why don’t you publish a book with them in it?’ Just like Canned Heat’s music, Joey’s visual art is raw, funky, and intensely human.”

“I’m very thrilled and honored that gallery owner Wayne Blodgett asked me to exhibit,” Orozco said, “but I’m nervous as well. He’s invested a lot of time, effort, and money, as well as had a lot of faith in me as an artist by giving me creative freedom—especially someone like me who has shied away from the limelight. It’s a trait you don’t find in a lot of people anymore, and I really admire that.”

Steve Key’s singer-songwriter showcases have some great performers lined up, starting on Thursday, May 19, at The Porch with Brendan Willing James (6:30 p.m.; all ages; pass-the-hat). This is the L.A. performer’s Songwriters at Play debut, but he’s a regular at storied L.A. venues Hotel Café and Room 5.

Head to Painted Sky Studios on Thursday, May 19, at 7 p.m. to see Bob and Wendy with Jameson Swanagon during a World Bicycle Relief Fundraiser Concert ($15). There are great raffle prizes, and anyone who buys a ticket gets entered.

Soulful singer-songwriter Michael Annotti plays Thursday, May 19, at Frog and Peach. In the past year, he’s opened for the likes of Jimmy Cliff, Don Carlos, Mikey Dread, and others, and he currently awaits the release of his debut record on Onaje Music of Philadelphia. 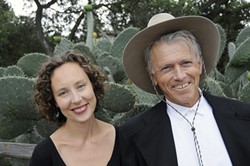 “My new honky-tonk and Western Swing band The Swingin’ Doors plays Linnaea’s Cafe this Friday, May 20, along with a line-up of great supporting acts such as Bob & Wendy, Charles Duncan, Randall Lamb, and the world famous Howlie Playboys, in a bill that I’m referring to as ‘Little Variety Night’ as a play on my long-standing ‘Big Variety Night shows,’” Ted Waterhouse explained. “The Swingin’ Doors has quickly blossomed into a jumpin’ six-piece unit with Allan Dick on fiddle, Bob Hamilton on pedal steel, Fred Murray on standup bass, and Dean Giles on drums.” This gem of a showcase kicks off at 7 p.m. sharp!

The inaugural Remembering Sam Ford fundraising event will take place Saturday, May 21, from 3 to 6 p.m. at La Perla del Mar in Pismo Beach. Samantha Michelle Ford of Arroyo Grande passed away in May 2010 at the age of 24 after her third battle with cancer. To honor her memory and continue her inspirational legacy, her friends and family have started the annual Remembering Sam Ford fundraiser. Proceeds will benefit Okizu, a nonprofit organization supporting families with childhood cancer, and create scholarships in Sam’s name for young dancers at The Studio of Performing Arts in Arroyo Grande. Tickets cost $20 and can be purchased online at RememberingSamFord.com or at the door. The family-friendly event features a superb lineup of musicians, dancers, and theater artists, including Nataly Lola, Chad Schmid, and The Ragged Jubilee.

Whatever happened to Kristen Black? The awesome rock chick fell off the Earth, but now she’s back and playing on Saturday, May 21, at Sally Loo’s Cafe. “I’ll come on at 6 p.m. and will be followed by a well-established singer-songwriter from Sacramento, Autumn Sky,” said Kristen. “Autumn just happens to be my ‘very talented, award-winning’ cousin.”

Great jazz trombonist Bill Watrous will perform with Cal Poly’s best jazz musicians in a concert at 8 p.m. Saturday, May 21, in the Performing Arts Center. Quincy Jones, Maynard Ferguson, and Woody Herman are just a few of the notable performers Watrous has recorded with. Tickets are $12 and $15 for general admission, $10 and $13 for seniors and Jazz Federation members, and $6 and $10 for students. Call 756-2787.

Larry Karush, an exceptionally talented jazz and world music pianist and composer from NYC—now based in Los Angeles—will perform a solo piano concert sponsored by the jazz department at Cuesta College on Saturday, May 21 (8 p.m.; all ages; Music Building, recital room 7160; $12 general; $8 student). According to his bio, “improvisation is integral to the music he creates out of his roots in jazz, Indian classical, Afro-Caribbean, western classical, and 20th century music. This solo concert of his ‘comprovisations’ will include original works, un-standard treatment of traditional and modern jazz standards, pieces by contemporaries, and a little 9/8 boogie-woogie.”

Folk and alt-rock quartet Stonehill plays an 8 p.m. show at Frog and Peach on Saturday, May 21. According to publicist Josh Fox, “They play inspiring songs that reflect their deepest intentions and their lives. Brothers Caleb and Nathan Stanton have been playing music since childhood. Starting with piano and adding more and more instruments into their repertoire, they felt music was their avenue of expression from a very early age.” Later that night at 10 p.m., Truth About Seafood takes the stage. “This will be a crazy show as predicted by Nostradamus!” said Brad Daane. “We’ll be celebrating our guitar player Pakes’ birthday along with three other May babies. Mark your calendar! It’s going to one of those nights that you only read about in Tiger Beat!”

Harp player Ramón Romero plays Sunday, May 22, at 3 p.m. at the St. James Episcopal Church in Paso Robles (1335 Oak St.). A virtuosic performer who is a true master of the Paraguayan harp, Romero plays traditional and contemporary music from throughout Latin America. He’s performed to rave reviews on four continents, including a private performance for the Queen of Spain. Local harpist Aurora Denny will join in. Tickets are $12 per person, $8 for seniors and students.

On Sunday, May 22, Grammy Award-winning jazz pianist and composer Bill Cunliffe and his trio will be the next attraction at the Famous Jazz Artist Series at the Hamlet. Cunliffe’s last recording Blues and the Abstract Truth Revisited was on the national jazz charts for months. Bassist Darek Oles, drummer Paul Kreibich, and series co-producers Charlie and Sandi Shoemake will join in. There’s a 4 p.m. show for $15, a 7:15 p.m. show for $12, or see both for $20. 927-0567 for reservations.

Check out Calling Morocco when they play Frog and Peach on Tuesday, May 24. “We’re a rock’n’roll, alt-country band from Davis, playing in support of our debut album, Outside Providence,” said the band. Their songs “focus thematically on the risks inherent in our day-to-day living, as we trudge like bruised mortals through the mists of drunken nights and incomprehensible mornings.”

Oren Masserman, a singer-songwriter and ukulele player from Maui, hits Frog and Peach on Wednesday, May 25. Much of his music is “inspired by a lifestyle of traveling, surfing, and sailing, and he values the ability to translate this lifestyle to his listeners through his original and inspired lyrics,” said his bio.

“Wine, Women, & Song” will unite singer-songwriter Rebecca Pidgeon and Women of the Vine as they and launch a new CD. Taste award-winning wines sustainably produced by women winemakers, and raise funds for Farm Aid and America’s family farmers. It kicks off at the Hotel Cheval in Paso Robles, on Thursday, May 26, and will run from summer through fall, with stops in wine-loving cities and venues.

It’s time for the annual KCPR Pledge Drive, and this one’s the 42nd anniversary of the little college station that kicks freakin’ ass! Tune into 91.3FM from Monday, May 23, through Sunday, May 29, and pledge some dough and receive killer KCPR merchandise, music, and various gift certificates donated by local businesses in San Luis Obispo County.

KCPR is an all-volunteer, student-run, nonprofit radio station that plays music you won’t hear anywhere else. The majority of the station’s operational costs are met by private donations through fundraising.

Turn to the left of the dial and pledge!