A homeowner has blocked public access to the beach

What was once a narrow path between a Shell Beach street and the beach has become a battleground pitting neighbors in a dispute that has embroiled state bureaucracies, councils, and courts. 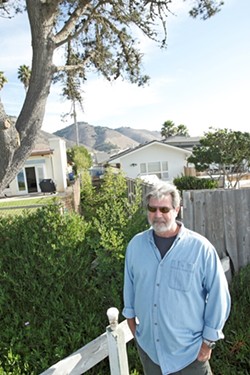 The path is a 10-foot-wide strip of land along the northern edge of homeowner Mark Yandow’s property. For more than 40 years, it provided access between the street and a perpendicular trail that runs alongside the bluffs behind the property. The trail had been used for access to the beach below and as a pedestrian link between Spyglass and Memory Parks.

Advocates for reopening the path point to the history of public use, which they say can be traced back to the early s. That ended in mid-2004 when Yandow fenced it off, “for the purposes of curtailing the public use of his property, increasing security, and reducing liability on his property,” according a California Coastal Commission report.

The fence was approved by the Pismo Beach Planning Commission and Yandow later was granted permits for additional work.

Some of Yandow’s neighbors formed Save Our Access Path (SOAP), a coalition dedicated to re-opening the path. SOAP filed a “quiet title” to the path property, and pressed to open a study of prescriptive rights by the California Coastal Commission.

California law states that in certain circumstances a long history of public access across private property can justify a path being designated public.

To achieve that designation, SOAP gathered more than 250 testimonials demonstrating frequent and continuous use of the path from at least 1962 to 2004. Still, the state Attorney General’s office, which represents the CCC, declined to file suit for the prescriptive rights to the path. They said they couldn’t afford to.

Yandow was then permitted by the City of Pismo Beach to build additional fencing on his property, and a series of appeals between Yandow and the CCC ensued.

SOAP’s case was put on hold until the litigation between Yandow and the CCC was resolved, but the questions in those suits couldn’t be answered because they were contingent on a finding of whether the path would be determined to be public or private land—the main issue in SOAP’s case.

What SOAP’s founder Tim Page calls a “legal morass” may be near an end. He’s hoping for a summary judgment early next year, but fears it may come too late.

Beginning in 2006, Page and other concerned members of SOAP began documenting what they call a deliberate effort to erode the bluff—thus rendering the path useless—by Yandow keeping a hose running regularly and by planting erosion-causing iceplants over the cliffside.

Repeated calls by New Times to Yandow were not returned by press time, but his architect, Randy Dettmer, has said publicly that Yandow is primarily concerned for the public’s safety because the path leads to a steep bluff.

Page and other SOAP members have presented their concerns to the Pismo Beach City Council, which has taken no action in response.

David Fleishman, the city attorney for Pismo Beach, said the city didn’t have enough evidence to pursue any action against Yandow.

“We found no evidence of excessive watering, nothing near what was depicted in the pictures submitted to the council,” said Fleishman. Neighbors near the path tell a different story.

“My fear is that, by the time he’s forced to comply with the court’s demands to reopen the path, enough of it will have fallen away that it will be unusable,” said Nick Sine, a resident of the neighborhood for nearly 25 years.

Intern Aaron Gaudette can be reached by writing to Managing Editor Patrick Howe at phowe@newtimesslo.com.