Keep time with a classical beat

Two years ago, one dozen painted violins paraded across San Luis Obispo County as colorful, elegant harbingers of the approaching Mozart Festival. The following year, a painted orchestra, comprised of a Van Gogh clarinet, a saxophone face, a stained glass trumpet, and other instruments followed the path. And this spring, a dozen painted clocks will tick down the minutes, hours, and days until the summer festival commences with the fringe series on July 11.

Painter Robert Burridge has contributed to the musical assemblage every year, first with a French horn, then with a violin, and now a clock. The artist, who considers himself an abstract expressionist, selected what he described as a "big round clock," 24 inches in diameter, as his canvas. 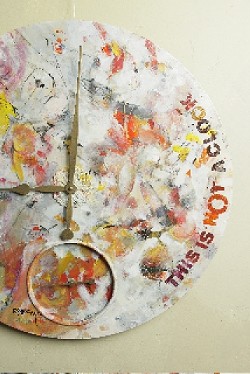 # What began as a clock with an old world map transformed into a piece of functional, modern art, with splotches of red, gray, orange, and yellow across the surface. The right corner is emblazoned with the message "THIS IS NOT A CLOCK," a tongue-in-cheek reference that Burridge attributed to Marcel Duchamp of urinal art fame, though the actual painting, The Treachery of Images, was painted by Rene Magritte.

It's rare that Burridge has enough time to donate his services for local art projects, but the classical music fan always makes the time for the Mozart Festival. In addition to being a full-time studio painter, the Arroyo Grande resident teaches art classes across several states and leads painting workshops in exotic locales, such as Guatemala. Fortunately, his wife Kate eliminates many a headache by managing the business side.

With a job that entails painting, traveling, and teaching, life for Burridge is pretty great--except when it comes to stepping on stage while his work, which he has developed a degree of attachment to, is auctioned off. But his success at last year's auction, where his piece sold for more than $5,000, certainly raises his hopes for this year.

Festival Executive Director Curtis Pendleton also has great expectations for the March 29 event, which she hopes will generate between $40,000 and $50,000 for the festival. The clocks may be a new direction in their annual auction fundraiser, but Pendleton believes the combination of time and music should pair beautifully.

Jim and Elaine Gardiner are volunteering their services as auctioneers for the evening. Far from the greenest members of the local volunteer auctioneer circuit, Jim estimates that he's participated in auctions for local nonprofits for around 15 years. In fact, the former Grover Beach chief of police and his wife, a retired schoolteacher, recently played a role in the Women's Shelter Show at the Madonna Inn.

# The couple has participated in fundraisers for Hospice Partners, Newman Catholic Center, Enhancement, the Special Olympics, the SLO Little Theatre, and the Clark Center. They've peddled jewelry, art, and vacation packages, encouraging bidders to reach a little bit deeper into their pocketbooks, always for a good cause. And after years on the job, the couple has become a familiar pair on the nonprofit auction circuit.

"One of the standing jokes was, 'Watch out, it's Jim, hide your wallet!'" Gardiner joked.

The transition from ordinary citizens to auctioneers wasn't as difficult as many might think. Jim insists that after watching a couple of auctions, it's easy to get the hang of what's going on.

Each organization also provides the duo with spotters, which was Elaine's role before she decided to join Jim as auctioneer. Spotters watch the crowd for bidders while the auctioneer works a few of the participants. And the pair works as a team, with Elaine announcing and providing a detailed description of each item--which she researches prior to the event--and Jim going after the money, so to speak.

Fortunately, when this pair comes for your money, it's not called getting mugged. It's called donating money for a good cause and walking away with a beautiful clock--or a "not a clock"--created by a local artist to boot.

The Mozart Festival Music For Your Eyes: The Time of Your Life exhibition began Feb. 18 at Castoro Cellars in Templeton, proceeded to K-Jon's Fine Jeweler's Showroom in Templeton on Feb. 27, and concludes its journey at Arts SPACE Obispo in the Creamery, where the clocks will be on exhibit through March 27. On March 29, the dozen timepieces will be auctioned at the San Luis Jet Center at the San Luis Obispo Airport at 6:30 p.m. The gala evening will include a gourmet meal, wine, and live music by Frankie's Four. Tickets cost $100. For more information, visit www.mozartfestival.com.