Keep - under God - in the Pledge of Allegiance

'Our nation belongs under God and all the children raised in the United Stated of America need to learn that from the first grade on, if they intend to be good United States citizens' 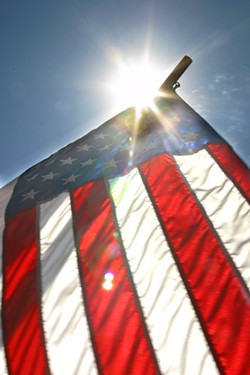 Editor’s note: A commentary by Emily Thurston, “Remove ‘under God’ from the Pledge of Allegiance” (June 25) provoked many strongly worded letters in support and in opposition, as well as this reply from Cindy Sandman from Atascadero. Sandman describes herself as a disabled 65-year-old woman who loves God, honor, and country and believes in truth and integrity.

“I pledge allegiance to the flag of the United States of American and to the Republic for which it stands, one Nation under God, indivisible, with liberty and justice for all.”

Our national pledge honors our flag, our country, and God. President Dwight Eisenhower added the words “under God” to the pledge in 1954 to distinguish the United States from Godless communist ideology. And President Lincoln included “under God” in his Gettysburg Address of Nov. 19, 1863: “… It is rather for us to be here dedicated to the great task remaining before us—that from these honored dead we take increased devotion to that cause for which they gave the last full measure of devotion—that we here highly resolve that these dead shall not have died in vain—that this nation, under God, shall have a new birth of freedom—and that government of the people, by the people, for the people, shall not perish from the earth.”

Moreover, our currency—all one-, five-, ten-, 20-, 50-, and 100-dollar bills—has “In God We Trust” printed on it. Every penny, nickel, dime, quarter, and 50-cent piece has “In God We Trust” on it. The United States of America still stands for freedom, under God. A lot of good men and women have died for God and our country and our freedoms. We have millions of kids saying the Pledge of Allegiance every day to honor the United States of America flag, God, and country, which is only right.

We as a country need God’s protection. Even though we mess up sometimes, He still protects us. We should not sell out our beliefs, ethics, and standards under pressure to placate any religious group. I’m sure immigrants were aware of our standards and ethics before they moved here. I believe they should honor our Pledge of Allegiance, our God, our country, our president. We need to thank God and the military and our government for preserving our freedoms. Thank God for the air that we breathe, for all the blessings God has bestowed on us, for every beat of our hearts, our family, our friends, and our country the United States of America.

God would like to hear from each one of us. Talking about God does not cheapen God. Nothing can do that. God should be on our minds and in our hearts. Yes, God is all knowing, almighty and, may I add, knows our hearts. There are millions of United States citizens who will attest to that, I have no doubt.

That we are under God, that our own nation is under God, does not violate the separation of church and state. God said come to him. I think it is imperative that we not be associated with communism, as did President Eisenhower when he added those words to the pledge.

We have fought wars to set people free, as we did in World War II to stop the Hitler regime’s thoughtless killing of Jews and our Civil War to set free the Black slaves. Our nation belongs under God and all the children raised in the United Stated of America need to learn that from the first grade on, if they intend to be good United States citizens. They need to learn there are inherited values and ethics that go along with their freedoms that must be honored, which men and women died for.

I think all children today need to learn the value of our free country. By pledging allegiance to the country under God and our flag, they can walk down the street without armed soldiers, go to the park, go to the library, and can own property someday. Deuteronomy 10:17 and 18 tell us: “For the Lord your God is God of gods and the Lord of lords, the great God, mighty and awesome, who shows no partiality nor takes a bribe. He administers justice for the fatherless and the widow, and loves the stranger, giving him food and clothing.”

Emily Thurston apparently has not read or heard of the Gettysburg Address or she would not have written in her commentary there’s a “sticky tangling” of religion and our government. God Himself is not a religion, however He is honored and worshipped by a variety of religions.  What are we supposed to do, change the Pledge of Allegiance to “under Buddha” instead of under God?  I think not. I don’t believe our founder fathers or Abraham Lincoln would buy that.

Contact contributor Cindy Sandman via the editor at econnolly@newtimesslo.com.