Keepers of the books

At Cuesta College, an art show challenges the idea of what a book is

Stumbling upon a child-sized ironing board in her mom’s attic triggered a mix of bemusement and shock in Los Osos artist Christina Troxel. After all, what kid irons? The thing couldn’t have been more than a foot tall.

“They really conditioned us from a young age to be mothers and homemakers,” Troxel remarked.

Decorated in kitschy ’60s fabric, the domestic plaything became part of her contribution to this year’s “Artists’ Books” show, held at the Cuesta College Art Gallery. And beside it, a book called How to be a Domestic Goddess reads, sneeringly, “She can work in the garden, put up shelves in the house, carry her partner’s golf clubs, be a fabulous mother and a nymphomaniac vamp in the bedroom.”

But while intended to be ironic, the book does appear to be a book, a quality not shared by many works in the exhibit. Take Pamela Paulsrud’s Touchstones, for example: They’re books altered to look like rocks, cut away smoothly from all sides. Sliced on a gentle curve, their rows of black print resemble the natural lines in an ocean-washed stone, and Paulsrud even throws some real rocks into the exhibit for authenticity. In fact, when Paulsrud submitted her work to curator David Prochaska, he said, she mailed them from Illinois in a box with the rocks on top—leading him to wonder if the submission was some sort of prank.

Cuesta painting and book arts teacher Prochaska has been jurying the book arts show since 1999. He studied book arts at UCSB and worked at Turkey Press in Santa Barbara before relocating to the Central Coast. His spring semester book arts course sees several “college drop-ins,” as Troxel calls them: adults like herself who pop in at the local community college just to take the fun classes. While much of the work in his show is his students’, Prochaska also receives submissions from book artists around the country. 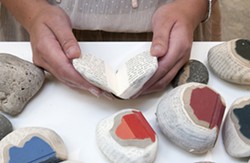 Delusions of domestic bliss weren’t the only things that captured Troxel’s imagination this year. The phallus, that timeless archetype, inspired the comprehensive volume Size Matters, a history of the penis and phallic imagery throughout the ages.

In Prochaska’s book arts course that semester, Troxel explained, the style was “pop-up”—and that was the first thing that popped up in her mind.

Cheekily, the book comes zippered in a protective cover sewn from the crotch of a pair of jeans.

Size Matters is complemented by Ode to a Penis, a dick-shaped book of phallic poetry (“David wanted unusual shapes,” she explains), which includes Emily Dickinson’s “A Narrow Fellow in the Grass” and “Phallus” by Sadiquillah Khan.

There are matchbooks, books made entirely of fabric, and books with elaborate closures, which take five minutes just to open. Crafting one of these pieces can involve many other creative disciplines: photography, poetry, illustration, sewing, or typography.

Leslie Stone’s bomb-shaped contribution is as much a piece of sculpture as a book. The message of the work—books, not bombs—is obvious, but the imaginative delivery makes for one of the most eye-catching pieces in the exhibit. The ends of the book were constructed from cardboard layers shaped with a belt sander and painted silver, creating a metallic aesthetic.

Both of Brown’s submissions contain vials of dirt from historic or significant places. There’s earth from her grandfather’s farm in northern Illinois and from the Vicksburg, Missouri, battlefield where her grandfather fought in the Civil War.

“It’s my own personal view that everything kind of boils down to the dirt. Everything is about attaining the dirt, living off it, eating off it,” Brown said. “When I travel, I carry a little dirt-gathering kit.”

Brown’s pieces, like many in the show, are tactile, interactive, and made to be experienced in person. Amid rumblings about the end of the book, these creations are the quiet revolt.

Arts Editor Anna Weltner is getting in shape to read. Contact her at aweltner@newtimesslo.com.