When the 2008 Amgen Tour of California rolls through San Luis Obispo next month, plenty of controversy will follow close behind some of the world's top cyclists.

For years, the use of steroids and other banned performance-enhancing drugs has tarnished the reputation of professional cycling. Most recently, 2006 Tour de France winner Floyd Landis was stripped of his title after testing positive for elevated levels of testosterone, though he maintains that he won fair and square. 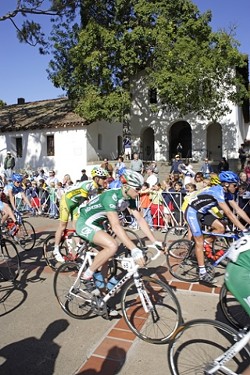 # Now, in an effort to help ensure a level playing track, race officials have announced that they will adopt the most comprehensive anti-doping protocol in the history of competitive cycling.

"You can't talk about elite cycling now without talking about performance enhancing substances," said Andrew Messick, president of AEG Sports and presenter of the race. "We believe that an aggressive approach to having a clean and fair race is essential to restore the credibility of top-tier bicycle racing."

On Jan. 22, from the campus of Cal State Dominguez Hills in Carson, Amgen race organizers announced the rules and regulations of the new anti-doping testing. Now, all riders will give blood samples prior to the race, and 30 percent of riders will have urine samples collected before the race. All of the blood samples will be tested for indications of blood manipulation. Urine samples will be tested for the presence of banned substances, such as steroids, hormones, and various masking agents. In addition to that, each day's stage winner, overall leader, and three other random competitors will be tested for banned substances.

The samples will be analyzed at laboratories in Utah and Los Angeles.

The move to test for steroids was also well received by defending Amgen Tour of California champion Levi Leipheimer.

"As a professional cyclist, I was enthusiastic to know AEG has made a further commitment to ensure that this year's race is fair," he said. "It is the development and implementation of stronger anti-doping programs such as this that will allow us as athletes to be respected as champions."

The effects of the anti-doping testing can be felt at the local level, too.

"Any drug-testing policy is important in the sport of cycling," he said. "The cleaner we make the sport, the better we can make the sport."

Fukushima added that one of the biggest challenges regarding cycling today is the negative perspective that its athletes use more performance-enhancing drugs than competitors in other sports. To him, that's just not the case.

"The reason why so many people are getting caught in cycling for doping is because the standards are way ahead of other sports," he said.

Despite the negative attention doping has recently brought upon the cycling world, Fukushima said the Amgen Tour of California is good for SLO County.

"The tour highlights our great area," he said. "It's a great economic boon and brings a lot of money to our city. We already have people calling us and asking where to stay and where to ride."

The Amgen Tour of California, the largest cycling event in America, is scheduled for Feb. 17 through 24. Seventeen of the world's top professional cycling teams will race through 650 miles from Palo Alto-Stanford University to Pasadena in the eight-day race modeled after the Tour de France. On Feb. 21, riders will cruise from Seaside to San Luis Obispo.

The SLO stage of the race requires 300 volunteers. Anyone interested in helping out can contact local volunteer coordinator Rich Ogden at the SLO Parks and Recreation Department at 781-7305.