Kelrik Productions returns with 'The Wizard of Oz' 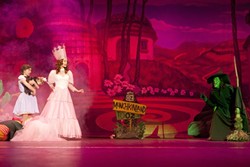 I’ll never get over how frankly hallucinogenic The Wizard of Oz is: The winged monkeys, the lysergic splendors of Munchkinland, the warped logic behind everything, and the even weirder dialogue that attends it (“Who would have thought a good little girl like you could destroy my beautiful wickedness!?” is still the best line to melt into a puddle with, ever.). Somehow, The Wizard of Oz is considered family entertainment—despite its heroine’s accidentally murderous tendencies and the story’s obvious underlying shoe fetishism.

I digress. Wizard of Oz, staged by Kelrik Productions, is playing for one more weekend (Feb. 1-2) at the Cuesta College Cultural and Performing Arts Center. (Bring the kids!)

Erik Austin, Kelrik’s artistic director, helms the production, which doesn’t skimp on vocal talent, visual effects, or costumes you want to eat. The show is heavily influenced by the 1939 MGM musical, down to the black-and-white opening and closing scenes, which are achieved through the use of grey- and sepia-toned costumes, sets, and backdrops (Austin himself served as set designer). Lighting designer and technical director Ryan Manus conjures a Kansas twister through clever use of smoke and lighting, even incorporating fleeting projected images of random objects flying by, just as in Victor Fleming’s film.

Much of the show’s true success, though, rests on a performance by Cassie Johnson as the earnest farm girl Dorothy Gale. Johnson, who is flanked (or rather, comically dwarfed) by Evan Camacho as the Scarecrow, Ed Cardoza as the Tin Man, and Bret Boyle as the Cowardly Lion, is a small person with an enormous voice. When, at a matinee performance on opening weekend, Johnson first unveiled her strikingly mature singing voice in “Over the Rainbow,” the audience seemed palpably impressed. Johnson doesn’t try to imitate Judy Garland, instead crafting her own mix of innocence and occasional impertinence.

At her side is a remarkably well-trained terrier named Abby, who stands in for Toto, allowing herself to be carried and loudly fought over without so much as a disgruntled woof. The choice to include a real animal in the production, risky as it might have been, lends considerable stakes to the story.

Wizard of Oz is the company’s first local production since last summer, when it lost its longtime home base at Unity of San Luis Obispo. Before it became homeless, the company delivered one last hurrah in the form of Shrek: The Musical, a fabulous production into which the company seemed to have emptied its closets, pouring out as much ambition, talent, costumes, money, love, and manic whimsy as it possibly could into one bittersweet, probably-not-final-but-who-knows? kind of show.

Now, the company’s back in action on the Central Coast—still without a permanent home, but with a full schedule planned anyway. (Kelrik will present You’re a Good Man, Charlie Brown in April and Beauty and the Beast in July; meanwhile, the company is also staging several productions, some of them concurrently, in North Hollywood.) Understandably, Wizard of Oz doesn’t quite rise to the same dizzying heights as Shrek, but it’s a fine show on its own terms.

Kelrik is the first outside theatrical company to stage a show at the community college’s 400-seat venue, and this unfamiliarity with the space probably explains the occasional minor technical issues experienced on opening weekend. A few late or out-of-place sound cues created fleeting moments of awkwardness onstage, but the cast soldiered on.

Local favorite Mike Mesker revels in his roles as the traveling magician and the Wizard himself, both characters truly one and the same; their powers a mix of misdirection, extravagant posturing, and behind-the-curtain mysteriousness. Allison King channels Billie Burke as Glinda the Good Witch.

“Only bad witches are ugly,” she chirps, with a kind of sparkly, benevolent cattiness; a smile infusing every syllable.

But it’s her nemesis, the Wicked Witch of the West (Theresa Riforgiate), who gets all the best lines. There’s something wonderfully miserly and superfluously e-vil about a character tossing “… and your little dog, too!” onto the end of a cackling threat, as if to drive home the fact that she is the villain in the story. Riforgiate (who doubles as Miss Gulch, Dorothy’s ruffled neighbor; again, essentially the same character as her counterpart in Oz) clearly has fun with the role, attacking it with everything her longsuffering vocal chords have got, her eyebrows knitting wickedly beneath a layer of green face paint.

Choreographer Joe Ogren doesn’t get as much creative leeway here as he did in Shrek, owing perhaps as much to the needs of the storyline as to the young ages of the ensemble members (they sure are adorable, though, like little twirling cupcakes).

The ending of Wizard of Oz is kind of a letdown, isn’t it? It turns out the whole adventure was Dorothy’s feverish hallucination—which, come to think of it, she should have known from the beginning, given the lurid color scheme, but still, the return to sepia Kansas is sort of sad. But that’s life, and that’s theater, too: All that’s left when we come blinkingly out into the light are the thin strands of atmosphere and fading echoes of song—until it’s time to dream again.