Before he had a name, he was just a peacock on the loose. Some concerned neighbors thought he might belong to someone. A post would pop up every few months in the Nipomo Neighbors Facebook group: "Did someone lose a peacock?"

Now, he's known as Kevin: by neighbors, by local kids, and even by the California Highway Patrol. It's unclear whether it's just one wild peacock making the rounds, or perhaps a few being identified under the same moniker. Either way, Kevin has quickly become a beloved community mascot, and has even sparked some light-hearted controversy. 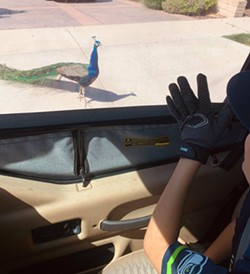 SLO County Animal Services Manager Eric Anderson said his department has received the occasional report of Nipomo peacocks "living in the eucalyptus groves in that area and more out toward the Mesa."

The earliest peacock sighting New Times could scroll back to in the Nipomo Neighbors Facebook group was in May 2019, when the majestic bird with iridescent blue-green feathers was presumed to have escaped from someone's yard. A few times throughout 2020, similar sightings occurred. It appears it wasn't until 2021 that folks stopped looking for its owner, and started giving the bird a name.

On Feb. 24, a Facebook user named Trish Hennessy Hall asked, "Anyone missing a peacock? On Martha Lane right now." A commenter suggested that "his name is Peter peacock." A month or so later, user Julie Edgar Garcia declared, "I say we name Peacock as Nipomo Neighbors official bird."

"He's very social, just came right up to us. I was washing my bike, looking in the opposite direction and my 13-year-old son was wide-eyed and pointing. I turned to see this massive peacock," Wolfe wrote to New Times in a Facebook message. "He didn't have a name yet at the time. Only a few weeks later I started noticing him showing up on the Nipomo Neighbors group."

In an April 8 Facebook comment, Martina Caballero wrote, "I think our peacock is either Kevin or Waldo ... most of us call him Waldo, as in Where's Waldo."

Nipomo resident Michelle Warren DeBilzan told New Times that she and her son, Rider, see Kevin from time to time. He hangs out in their neighborhood near Tejas and Ida Place.

But on July 1, one innocent local accidentally sparked some Kevin controversy. June Scheer wrote in Nipomo Neighbors that she had spotted a peacock and, not knowing about Kevin, notified the police of a bird on the loose. The California Highway Patrol incident report, later posted in the comments, names the culprit as "Kevin the peacock."

The comment section went wild. More than 100 comments, ranging from teasing to downright mad, berated Scheer for calling the cops on Kevin.

"I honestly want to know how people in Nipomo ... especially those on the Nipomo Facebook page, do not know about the peacocks?" wrote user Robert Tolan. "They have been here for dozens of years. I'm just shocked people would still call the cops on an animal in general. It sounds like we need a Kevin Officer. An officer that just follows Kevin around so people do not call the cops."

Quickly realizing her error, Scheer posted again a few minutes later, identifying herself as "the Karen that called the cops on Kevin the peacock." Scheer added that she was touched to learn that the peacock's name is Kevin, as she had recently lost a friend named Kevin to COVID-19. Scheer felt her Kevin sighting was a message from her departed loved one.

Whether Kevin is just one bird who gets around, or a few wandering the Nipomo area, is hard to say for certain, according to Anderson with animal services. But, he added, peacocks do tend to flock together, so the fact that Kevin is always seen alone means he may indeed be the solo town mascot that locals believe him to be.