Representatives from People for the Ethical Treatment of Animals (PETA) brought their dog-and-pony showâ€”minus the actual dog and pony, which would be cruelâ€”to Grover Beach on June 23 to protest Kentucky Fried Chickenâ€™s alleged mistreatment of factory foul. The longstanding campaign against the fast-food giant makes claims of deliberate cruelty and neglect of the birds, which arenâ€™t currently protected by federal laws. 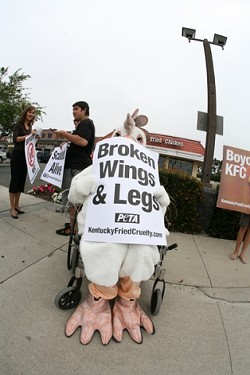 # The three national PETA reps joined up with local group Animal Emancipation Inc.â€”largely known for its protest of the annual Santa Maria Elks Rodeoâ€”and set up a picket line along the north sidewalk of Grande Avenue just in time for the lunch crowd. At 11:15 a.m., protestor Kelsey Gibb of Idaho donned a chicken suit and rolled around in a wheelchair at the intersection of Grand and Oak Park Boulevard.

While PETA prepared the spectacle, a KFC assistant manager, who refused to identify himself, told the protestors they had to move off the sidewalk immediately in front of the restaurant. The group didnâ€™t complyâ€”and Grover Beach Police made a brief appearance, but left after finding no laws in rift. The restaurant management said that it had received no advance notice of the protest.

The picket line successfully deferred some customers, but other Grover Beach residents patronized the restaurant in counter protest of PETAâ€™s often-vivid shock tactics. One KFC-bound mother screamed and pulled her child away when he reached for a flyer extended by one of the protestors.

â€œClose-minded people bother me,â€? local activist Peggy Koteen said when asked if the common reaction ever dissuaded her from protesting. â€œIt really doesnâ€™t matter if itâ€™s this, or gay and lesbian rights, or anything else.â€?

The organizationâ€™s beefs with the chainâ€™s poultry farms include the purported clipping of beaks; feeding and caging practices that lead to bird injuries, which go untreated; and slaughter by scalding.