Kick it root down: Celery root is a unique root vegetable to try during late spring

I have an unabashed love for ugly produce.

For decades, Americans have been trained by commercials and mass marketing to believe that the best vegetables are the ones that look like they walked off a Chanel runway—marked by bright exaggerated colors, flawless skin, and a shape most bikini models would envy. But we know that's all b.s. (pardon my French). 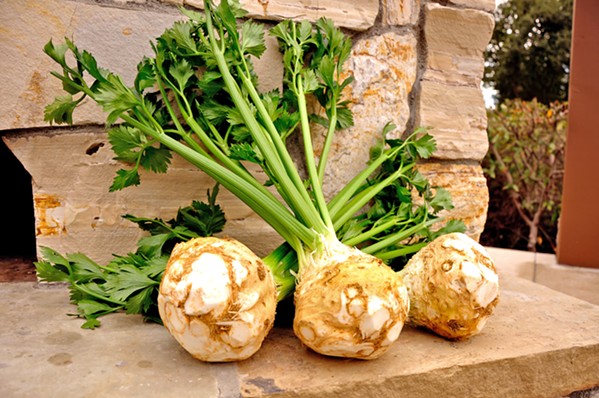 Vegetables don't come out of the ground looking camera ready. They're often dirty and gnarled, yet ultimately wholly and beautifully imperfect. Take the celery root for example. Here's a weird and funky looking vegetable that holds so many great culinary treasures yet doesn't get nearly as much spotlight as some of its prettier cohorts like rainbow carrots or turnips.

So what the hell exactly is a celery root, also known as celeriac? (Is it celery? Why are we eating its root?) For some of those questions, I turned to Matt Hiltner, marketing coordinator for Babé Farms in Santa Maria.

Because of that, unlike its namesake relative, the stalks of celery roots are very fibrous and practically inedible. They can be used to flavor soups or stocks, but you won't enjoy snacking on them with peanut butter or your favorite veggie dip. It's the bulbous root where the flavor lives.

The flavor is similar to celery with a small hint of parsley thrown in. It also tends to have a very nutty flavor on the palate, which can be heightened by roasting it or pairing it with other root vegetables, such as parsnips or potatoes.

"It's honestly one of my favorite items we grow," Hiltner said. "It has a really good flavor. Once you get past the rough exterior, you can do a lot with it. A lot of chefs will use it for things like purees, which is one of the most popular things to do with it."

Celery root puree is indeed a popular and easy way to introduce your dinner plate to the vegetable. It's a great substitute for mashed potatoes, and the preparation really isn't that different from the traditional side dish.

To make a puree, first cut the stalks of about three celery roots and vigorously scrub and peel them (but be careful not to cut away too much of the tender vegetable under the skin). Once you've done that, you can cube them and then add them to a pot of vegetable or chicken stock with some onion and garlic. When it's fully cooked (about 20 minutes on medium to ensure the root is tender), you're ready to go. Remove the vegetables and mash them up with salt, pepper, butter, and cream, as you would a normal potato—or use a food processor to puree it into a fine creamy texture.

Soup is another versatile way to enjoy all that the gnarly vegetable has to offer. Saute cubed celeriac with olive oil, leeks, and garlic, and add seasonings and soup stock. I've seen recipes that add ingredients such as potatoes, apples, and chili powder, so there's definitely room to get creative and experiment. 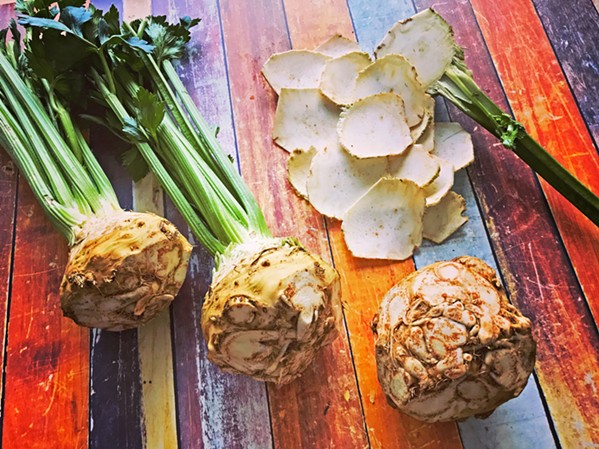 Celery root can also be enjoyed roasted (which is what I often do with it). Once again, peel and cube about two or three roots, drizzle with olive oil, season with salt and pepper, and add some fresh herbs (thyme is a great complement to celery root). Roast on a baking sheet at 425 degrees for about 30 minutes, checking on them every 15 minutes to stir so they are evenly roasted. I like to add carrots, turnips, or rutabagas to this recipe to really celebrate hearty root vegetables.

There's so much more celery root can be used for and it doesn't even have to involve cooking. Over at SY Kitchen in Santa Ynez, chef Luca Crestanelli is a fan of using the root to punch up dishes like salads, including one that's currently on his menu.

"It is a nice root vegetable that you can find year round," he said. "It's crunchy, it's got a nice flavor."

Crestanelli actually prefers it uncooked, because roasting or cooking it can make the flavor a bit intense. He uses two different kinds, including one that he imports from the Netherlands.

"We peel it and then we slice it thin," he said. "It does tend to oxidize very quickly, so you want to put it in water [with] lemon. That's how it should be handled, and then you can add it to things like salads." 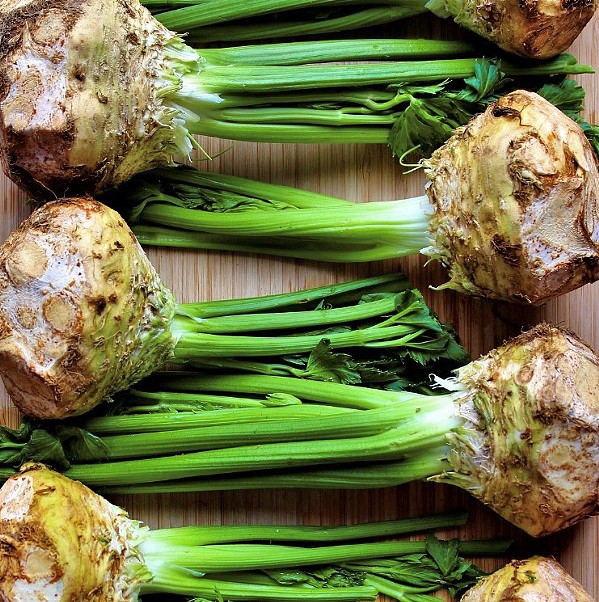 He said it tastes better when paired with something bitter, including lettuces such as radicchio, endive, or arugula. At SY Kitchen, celery root is included in their pea salad, which includes sugar snap peas, English peas, walnuts, arugula, and a lemon vinaigrette dressing.

So next time you're at the grocery store or farm stand, give this plucky underdog vegetable a chance, despite its twisted, funky looks. Whether in soups or raw in salads, it's definitely a fun way to shake things up in your kitchen. ∆