Chili cook off, antique cars, and dancing in the streets!

I’m working on my lingo for the chili cook-off in Paso Robles this Friday, May 28. Since I’m a very special, venerated, highly qualified judge, it’s important I find ways to explain my discerning tastes in language such non-epicures as you can understand. You know, like wine judges explain tannins and bottle stink? Anyway, check this out:

“A fine bouquet of beanie effervescence.” “An amusing kick of jalapeño and cayenne.” “Black beans and lime suggest a cloying Caribbean flair.”

That’s if it’s good chili. If it’s bad, I’ll go with stuff like this:

“A dusty concoction that needs more chilies if it expects to be taken seriously.” “Tastes like Drano with a hint of toxic waste.” “So this is what pain tastes like.”

I also hope to employ the words “flabby,” “herbaceous,” “lanolin,” “mouth-puckering,” and “volatile.” 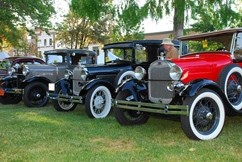 Hey, look, just because your vocabulary isn’t as rich as mine is no reason to pout. I’ll tell you what; you can be a judge, too. No, really, you can, because I was just joshing when I said I was a very special, venerated, highly qualified judge. In truth, the chili cook-off is open to the public. There are almost a dozen restaurants competing, they’re selling tastes, and then you, John and Johanna Q. Public get to vote for the best. This way you probably won’t be harmed by tasting street chili cooked in a basement by a crazy guy who burned his own taste buds off in a chili experiment gone awry. The chili tasting goes from 5 to 9 p.m. in Paso Robles on 12th Street. Look for the tents filled with people trying to hold in their farts.

Of course, you’ll probably want to get there earlier, around 4 p.m., because that’s when all the old cars from the ‘20s, ‘30s, ‘40s, and ‘50s will be arriving, parked along 12th Street between Spring and Pine Streets.

Some of these cars will have crying dolls leaning up against them. You may have an uncontrollable urge to kick these crying dolls because you don’t understand why they’re there. Don’t! Elderly people find these dolls charming and will crease your noggin with the tire iron from their 1922 Model T Ford if you mess with them. 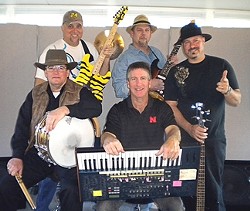 At 6 p.m., you’ll be able to turn your attention from old cars and chili and begin to shake your moneymaker to the sounds of Second Wind, the live band that’ll play until 9 p.m. in front of the City Park. Dancing in the streets! It’s what Kevin Bacon rebelled for in Footloose! It doesn’t really get more American than this, people!

Best of all, am I the only one who sees a trend here? Chili gives people gas, old cars run on gas, passing wind is a euphemism for flatulence, and the band’s name is Second Wind. A puerile trifecta! A cosmic coincidence!

I’m sure that’s what Norma Moye, Executive Director of the Paso Robles Main Street Association, was thinking when she decided to team these three things into a new event. It’s going to be a real gas!

“This is the first year we’re doing this,” she said. “We had a chili cook-off a couple years ago, but this is different because it’s in the street and we’re having a street dance with live music, a beer and wine garden, and almost 12 local restaurants that will have chili to taste with judging as People’s Choice. We have one big trophy and every restaurant gets a trophy for participating.”

“We’re hoping people will come out and vote for the chili and the old cars, because it’s People’s Choice to judge the cars too. It’s free to get in, so come on down, except you have to pay for chili tastes, beer and wine, water and cokes, but the street dance is free, the cars are free, and it’s all presented by the Paso Robles Main Street Association,” she said.

I think of another contest, and it involves standing behind someone with a Bic lighter. See you there! ∆