Sven Gasser is a pretty capable guy—the kind of guy who can build an electric guitar from scratch (it doesn’t have to sound good to still be a really cool experiment). For the past two years, he’s been hammering away at a boat in his garage; a boat that he one day hopes to navigate across the Panama Canal. 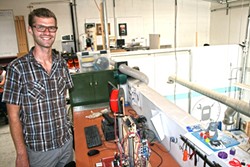 No, he’s not a craftsman. Nope, he’s not an artisan. Yes, he’s a bit crazy. He calls himself simply “a maker,” the kind of person who learns by doing and bravely dives into that great unknown.

“I mean, I had no idea how to make a boat when I started, but I didn’t let that stop me,” the former math and science teacher said.

Trying and trying again is a big part of the maker movement—it’s the first step toward real, hands-on learning, the kind that leads to true DIY triumph. This is the main message Gasser aims to teach kids through the SLO Maker Academy Summer Maker Camp held through Aug. 7.

“Children should never be afraid to try learning a new skill,” Gasser said. “In public education these days, shop classes are one of the first things cut from the budget. Not many kids are working with their hands, and that’s one thing we wanted to bring back to the community.”

The SLO Makerspace, with its walls of shining tools and open-share camaraderie, offers up an alternative to a summer of computer games and TV shows.

“When I was growing up, I had a dad who was into building things and making things, and I got into woodworking at 9. I haven’t stopped since then,” Gasser said. “People at the Makerspace are the same way. They just love being here, creating.”

A row of laminated tags hangs on the door that separates the main floor space from the woodworking shop. Each represents a different Makerspace member; colored stickers indicate skill certification.

When it comes to using table saws, welding equipment, mills, and laser cutters, safety is paramount. Of course, kids won’t be manning these kinds of tools just yet. Camp offerings include pottery throwing, shaping malleable metals, and learning how to use a CNC router to cut out any shape under the sun.

“It’s the safe but fun stuff,” Gasser said with a laugh. “It’s a controlled environment, and the maximum camper-to-adult number is five to one. That’s good, considering all the fun things around here kids could get in trouble with.”

After putting on a pair of clear safety glasses, Gasser showed me the workshop’s CNC router, which, in itself, represents true maker ingenuity at its finest.

A wooden pterodactyl hangs above the contraption, showing just what you can do with the software.

Not only is the prehistoric animal comprised entirely of wooden shapes cut out by the computer-controlled device: The machine itself was made by another CNC router.

Yes, you read that right: A maker made a CNC router that, in turn, “made” the parts for a second CNC router.

“The whole maker movement of ‘making your own tools to make what you want’ is huge. This machine is straight out of that philosophy,” Gasser said. I ran my hand over the router’s many grooves, imagining the hundreds of parts that had been created by the single machine. 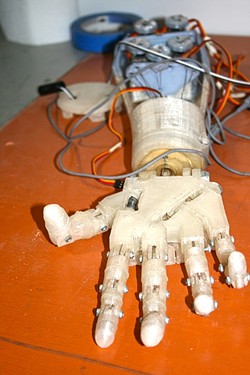 Upstairs, I found more crafty technology that wowed my world: A robotic arm that can be powered by Internet users, life-sized wire sculptures of men and women created by sculptor Michael Redden (he plans to create bulls and other farm animals next), and a clutch of wire-covered 3-D printers, to name just a few.

Gasser held up a couple of plastic parts created by the 3-D printer sitting alongside a wooden car used to educate kids during SLO’s Thursday Farmers’ Market.

“We really want to reach the kids,” Gasser said. “That’s what it’s all about.”

That being said, the SLO Makerspace is a mecca for curious kids from 1 to 92. Makers of all ilk are invited to rent out the nooks and crannies at the workshop, and, because the locale is open regularly till 11 p.m., it’s become quite the after-work hangout for tinkerers, engineers, and artists.

Gasser said he hopes the new influx of kids will become those future makers. All it takes is a bright idea and a fearless mind.

“In so much of society today, things are done for you. You go to the store and buy whatever you want for a nickel,” Gasser said. “There’s no sense of the satisfaction that comes with making something for yourself.”

So, what would the world be like if every community had its own makerspace? If every child learned to wield a power drill and utilize a 3-D printer? I ran the question by Gasser, who’s eternally optimistic.

“That would be a very cool world to see,” he said with a smile. “Anyone can be a maker.”