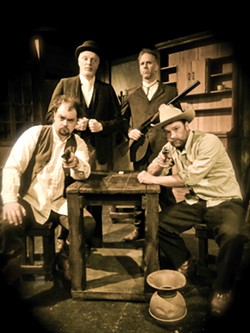 Lee Blessing’s The Authentic Life of Billy the Kid is actually a revised version of his first play, The Real Billy the Kid. That seems fitting. Revision, after all, is key to this tale.

Legend has it that Pat Garrett shot Billy the Kid at Fort Sumner in 1881. But that didn’t actually happen, according to the Kid himself, who shows up at Pat’s house 20-odd years later.

Directed by Jake McGuire and staged at The Spot in Arroyo Grande (which remains open despite construction on the building), The Authentic Life stars Brian Williams as Pat and Matthew J. Hanson as Billy. Tom Ammon, known for his frequent SLO Little Theatre appearances over the past several years, is Ash Upson, the enterprising ghostwriter of Pat’s sensationalist first-hand account, the dime novel The Authentic Life of Billy the Kid, Noted Desperado of the Southwest.

It is Ash who brings Billy to Pat, claiming that the Kid is his driver. It is only after Billy wordlessly points a gun at Pat’s back that it becomes clear that he may in fact be noted desperado Billy the Kid, back from fictional death. The man Pat shot and killed that day in 1881, Ash claims, was a different man entirely.

In the reunion of Billy and Pat, Ash sees a chance to make a quick buck, touring the country with a dramatic reenactment of Billy the Kid’s death, the way Pat Garrett says it happened. Never mind that the appearance of the real Billy the Kid, if audiences believe it’s really him, totally debunks Pat Garrett’s story, which was really written by Ash—and audiences don’t believe it’s him, Billy the Kid just looks like a mediocre actor. None of this seems to faze Ash.

In this regard, too, The Authentic Life seems oddly self-aware, able to comment on the essential silliness of pretending to be someone else for an audience (even if that someone else is another version of yourself) in order to recreate an event the way it happened in your memory, a thing that is easily corroded by time and distorted by retelling. Drama and legend are thus proven to be symbiotic things. Audiences, Ash assumes, want to see a reenactment that lives up to the legend, and the legend, we assume, persists through reenactment.

Blessing, better known as the playwright of Fortinbras and A Walk in the Woods, knows how to create nuanced situations and complicated, perhaps even tortured relationships, and The Authentic Life is a perfect study of this. As much as Pat Garrett and the Kid hate one another, they seem to understand that their identities are forever entangled. And so, despite their frequent threats to kill one another, there’s almost a kind of nostalgia in there somewhere. Almost.

Brian Williams, beardy and sullen, crafts a believable Pat. He’s in a bad way at the start, and we watch as he begrudgingly rehearses his “act.”

“Can I kill him?” he implores when Billy has left the room.

As his foil, Billy the Kid, Matthew J. Hanson comes across as surprisingly downtrodden and passive, like a kid who was always bullied in grade school and seeks revenge only as a grown man. Even when he draws his gun, his eyes reveal only hurt and resentment—not the gleam of a trigger-happy lunatic, the one who had killed 21 people at 21 years old, as he defiantly claims.

Tom Ammon is skilled at playing both authoritative, fatherly mediators and characters who are just a little bit deluded; occasionally blending these two together for an intriguing result. When trying to stop Pat and the Kid from killing each other, Ammon’s Ash briefly appears to be the one with his head screwed on, but we soon witness enough of his cockamamie scheming to realize he’s just as foolhardy as they are.

But there’s a fourth player here, too: Jim Miller (Dave Linfield) turns up late in the first act, ostensibly to look into purchasing land from Pat. But Jim is clearly too invested in the rivalry of Pat and back-from-the-dead Billy the Kid for this to be his only motive. Linfield’s portrayal of Jim is a little cautious, if that’s the right word; less passionate or forceful that the others’, even in heated moments. At the same time, his delivery can come across as rather stylized, like an impression of someone. One senses the mask being held aloft.

The entire play takes place in a one-room shack, which gives a stuffy, claustrophobic feeling to the show. You can practically feel the bad intentions stewing, swirling sickeningly, rebounding off of walls. This static setting seems to have been an advantage for the show’s set designer or designers, who have only one place to evoke and do so with great attention to detail. Mounted antlers, a rough-hewn table and chairs, a stone fireplace, and an intimidating display of rifles on the wall create an Old West atmosphere.

The entire show seems built on the anticipation of someone getting shot. It’s pretty much the only acceptable outcome. Once that tension is eventually broken, however, there’s a brief moment of poignancy, sadness, clarity, and relief (or there would have been if a woman’s obnoxious ringtone hadn’t gone off, ruining everything, but that’s another matter), and in a way, we’re back where we started.