I’m surrounded by rugrats as I roll into Salon 544 on Friday, Oct. 1, at 6:10 p.m. They’re crowded around a drawing table, stringing colored macaroni into necklaces, getting their faces painted, running around the front yard of Salon 544. Inside the downtown hair salon, children’s art fills the walls and people mill about, placing silent bids to benefit the SLO Child Development Center, which since 1971 “has been dedicated to breaking the cycle of child abuse in our community by providing a network of prevention, intervention, and treatment services to protect children and heal, support, and strengthen families,” according to the organization.

As soon as I walk in the door, I get my bid number and beeline it to the painting my niece, Lauren Van Horenbeeck, did. I donated the piece from my private collection, but I’m determined to buy it back. What the hell? Bidder No. 3 has already offered $10 for it. I quickly double it and head into the lobby where I see Sherry Jiminez, owner-operator of Salon 544.

Sherry cuts my hair, and believe me, she’s a miracle worker who even manages to make me look good. Then I head outside to where the munchkins are doing munchkin-like stuff. There’s Sherry’s husband Mario painting 4 1/2-year-old Devon Crozier’s face. 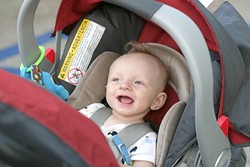 “That ‘half’ is important at that age,” explains Devon’s mother.

“That’s awesome, Sevryn. Where’d you get the idea?”

“It was Sherry’s idea … oh, wait, not that one,” recalls Sevryn. “I saw that on the Internet.”

“Did you cut out all those little pieces?”

“Yes, I cut out some shapes and put it together. It looks pretty cool.”

Then I run into Houry Semerdjian, who volunteered to help Sherry with the silent auction.

“I get my hair cut here,” says Houry, “and I had a show here in June. As Sherry and I were hanging it, she told me about her idea about auctioning children’s art. I’m a mom, so I know a bunch of moms. I don’t know anyone who doesn’t have their children’s art on display.”

I wander back outside where I see Bill Hale, who runs Ash Management, which in turn runs most of SLO Town’s bars. He’s watching over his kids Devon and Austin, the latter of whom is busy “fixing” his dad’s drawing.

“He’s making a monster truck out of the convertible I drew,” explains Billy.

Then I see a smiling baby in a stroller. The kid looks like he’s having a riot.

Then I see my old pal Christopher Gardner, the former New Times photog who left the paper to start SLO City News. His daughter Sophia, 12, made a couple of sweet paintings, so I place a bid on them, make a final check to be sure I’ve still got the highest bid on my niece’s painting, and leave to go have dinner. Lauren will be so excited to see how I framed her painting!

The next day I get a message from Sherry: “We raised $1,100, but sorry, you were outbid on Lauren’s painting.”

It turns out Sherry bought it for Sevryn. Traitors! But I guess that’s the way it goes in the high stakes, thrill-a-minute world of children’s art auctions.