When I heard “Young Professionals Networking Group (YPNG),” the first thing I thought was “nerds.” The second thing I thought was “wedgies,” followed by “Gimme your lunch money,” and rounded off with “I should take Molly Ringwald up to make-out point in my dad’s totally rad sports car.” 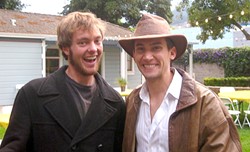 I expected a bunch of squares is what I’m saying. The name makes it sound like all they want to do is get together for PowerPoint presentations about neat investment opportunities.

Turns out they’re much more interested in things that are actually fun—things like happy hour parties, softball leagues, and hiking excursions.

“A lot of people graduate college; their friends leave town; and they think there’s nothing to do here, so they move on, too,” YPNG president Jamie Magon said over coffee one recent sunny morning. “But there’s a ton of stuff to do, and there’s a lot of really cool people in that same situation.”

Jamie said business contacts are often a byproduct of social connections, but the main focus of YPNG is introducing young adults to their fun-loving peers so they don’t get all mopey and leave town.

“YPNG helps establish the social base that keeps talented people here,” she said.

She brought a few of the club’s leaders along for our coffee meeting, and they were all happy and friendly, despite the fact that I’d called them all there just to make them wait for 15 minutes while I sat a few tables away like an idiot who hadn’t given Jamie my cell number or plugged hers into my phone or told her what I looked like. That’s how this young pro gets it done.

Erin Bernard said she met her fiancé at YPNG and wasn’t alone in that regard. Ryan Baker explained how the softball league has enough players to fill six teams and then some, and social outreach director Jess Hawley described the then-upcoming (but now past) movie night fundraiser for the San Luis Obispo Food Bank.

“Any time we make a profit, it goes back to charities and other nonprofits,” Hawley said. “We do two big charity events a year. The Monte Carlo night in April is always really fun.”

The Aug. 19 movie night featured Indiana Jones and the Raiders of the Lost Ark on an outdoor screen at the fancy Jack House and Gardens right in the midst of downtown. There was plenty of beer, wine, popcorn, and candy available, as well as a raffle with prizes so awesome that a 20 pound box of avocados wasn’t the best one.

People showed up well before dark to drink and be merry. Morgan Fields said she was dragged into YPNG by a friend about a year ago.

“Drinking beer and watching Indy on a Friday night? This fucking sucks,” she joked as I took notes. “If that goes in the article, I’m going to be the first person blacklisted from YPNG.”

“It’s going in,” I said. “A little dissent will make the article more sexy.”

“I’m making it more sexy!” she exclaimed within earshot of my wife.

“I’m just gonna awkwardly back away now,” I said. “I think the movie’s starting.”