Thank the music gods that the Fremont Theater had the good sense to take out seats in front of its new stage to make a dance floor, because when LA-based 10-piece afro-funk act Jungle Fire plays KCBX’s Holiday Funk & Folk Fest this Saturday, Dec. 10 (7 p.m.; all ages; $20 presale at Boo Boo’s or ticketfly.com or $22 at the door), we’re going to need it!

The ensemble’s blend of West African dance music and Afro-Caribbean rhythms mixed with horn-driven American funk is irresistible. When you hear it, good luck trying to stay in your seat. 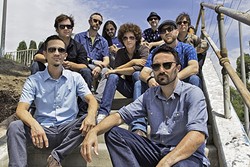 Lytle—a Cal Poly alumnus who spent much of his music career singing backing vocals and playing bass—has a nuanced voice and writes deeply personal songs that nonetheless touch on universal themes. This will be the “sit back and enjoy your first craft beer or glass of wine” portion of the evening. His new album is called The End of Ours.

You might need to get up and dance to this act, which you voted “Best Local Band” in this year’s New Times Best Of Readers’ Poll. May I recommend you polish up your tango and West Coast swing? So many of Williams’ songs are about wicked acts, and nobody’s better at emoting a femme fatale than Langdon!

When Jungle Fire takes the stage, get ready for the place to go crazy! With an infectious and explosive funk sound, you’re going to want to be on your feet. These guys sound like they could back up James Brown! Their debut full-length album is Tropicoso. 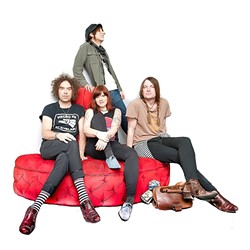 It’s a great record, and since its release they’ve enjoyed a successful U.K. tour as well as their South American debut show at the Mompox Jazz Festival in Colombia. They’re currently preparing their follow-up to be released in early 2017, titled Jambu.

This ought to be a great show to benefit a first-rate nonprofit radio station that offers vital syndicated NPR programing such as All Things Considered, Democracy Now, Morning Edition, and This American Life, as well as a ton of locally produced live-DJ music programing like Neal Losey’s eclectic show the Morning Cup, Janelle Younger’s the Broken Spoke Folk Show, Rick Matthews’ Freedom Jazz Dance, and many more.

If you’re suffering from actual holiday funk, hit this show! As Good Medicine’s motto says, it’s “the cure for what ales you!”

While we’re on the Good Medicine and Numbskull subject, they also have one more great show this week, on Wednesday, Dec. 14, when The Dandy Warhols play the Fremont Theater (7 p.m.; all ages; $20 presale at ticketfly.com or $23 at the door).

If you like you rock ’n’ roll dirty and raw, sexy and smart, arty but unpretentious, this is your band.

“Our whole thing is a disorganized byproduct of being alive,” singer-guitarist Courtney Taylor-Taylor said in press materials. “So our music is organized disorganization.”

Formed in Portland in 1994, the band has developed its own neo-psychedelic, synth-pop sound, and it’s pretty amazeballs! If you’re on the fence, check out their many awesome videos online. They’ll make a believer out of you.

Get higher with Hirie!

This Friday, Dec. 9, SLO Brew hosts Hirie (9 p.m.; 18-and-older; $15 general admission or $25 for VIP balcony seats available at slobrew.com), whose sophomore album Wandering Soul debuted at No. 1 on Billboard’s Reggae Charts. This is the female-fronted act’s debut on the Rootfire Cooperative label. The 11-track album features a number of guest stars including Trevor Hall (“Good Vibration”), Nahko Bear (“Renegade”), and Nattali Rize (“Woman Comes First”). Should be a cool show for a band on the rise! Ital Vines will open.

“I’d love for the listeners of my [new] album to feel inspired, to find a moment in their day to think only of their passions in life,” Hirie—who was born in the Philippines, raised in Italy, and spent a lot of time on Oahu—said in press materials. “The songs set a very spiritual atmosphere; having learned so much of myself and my band members on the road for the past two years. It all varies in color and vibe in such a way I feel very strongly about its impact on those who fancy a listen. This is a culmination of where we’ve been and where we’re going all thanks to our family, friends, and fans!” 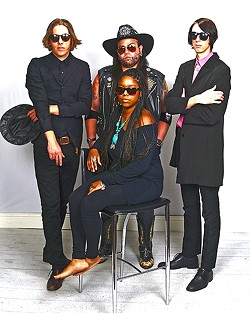 The In Time Singers (Judy Philbin, Becky Robinson, and Kit Johnson) perform Christmas music this Friday, Dec. 9 (7:30 p.m.; all ages; tickets at brownpapertickets.com), in the Cambria Center for the Arts. They’ll also play on Sunday, Dec. 18 (3 p.m.; all ages; info at sloma.org/events/), in the SLO Museum of Art.

This Saturday, Dec. 10, The CC Riders bring their mix of blues, roots country, and Tex/Mex music to D’Anbino’s (8 p.m.; 21-and-older; $15). This is a terrific acoustic quartet with excellent musicianship, delivering ballads to gritty blues!

Erick Tyler brings his sexy rock sounds to Frog and Peach on Saturday, Dec. 10 (10 p.m.; 21-and-older; free). Check out his track “Sex Voodoo Magic” on Soundcloud to get an idea of his rock/R&B sound and blistering guitar licks. 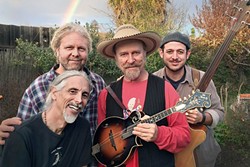 Pound for pound, The Monroe has more raw talent than any young band could hope for. They’re the Tiger Woods of tunes, the Williams sisters of rhythm, the Michael Jordan of jams! They also have an amazing new album—It’s a Secret—that features their arresting style with Morgan Monroe’s potently soulful voice at the center, surrounded by multi-instrumentalist and musical alchemist Dr. Isapony X.D.S.’s brilliantly original melodies, tethered to Earth by percussionist Stevie Ray Stinson’s backbeat and guitarist Loom Fittuce’s bright fills. They’ll play an album release party this Sunday, Dec. 11, at the Atascadero Community Church (5850 Rosario Ave.; 4 p.m.; all ages; $10 general admission or $5 for students and children, available in advance at Hush Harbor Artisan Bakery or at the door). Appetizers and beer will be available for purchase, and The Artist Dexter Smith will be performing live projection art at the release party.

Painted Mandolin featuring multi-instrumentalist Joe Craven plays the tent at the Templeton Tennis Ranch this Sunday, Dec. 11 (4 p.m.; all ages; $28 tickets at Boo Boo’s or brownpapertickets.com). This amazing acoustic quartet bills its sounds as the “upbeat and energetic Dawg music of Jerry Garcia,” and the show opens with the original music of Kristen Black, whose “The Bicycle Song” was a winner at this year’s New Times Music Awards. Snacks, beer, and wine will be available for purchase.

St. Stephen’s Episcopal Church presents a holiday choral concert featuring the church choir in collaboration with guest soloists and the Cuesta Chamber Choir on Sunday, Dec. 11 (5 p.m.; all ages; free-will offering). “Please join us for the ‘Christmas Oratorio’ by Camille Saint-Saëns and a Christmas carols sing-along followed by a potluck dinner. Don’t feel obligated to bring a dish unless you want to,” church music director Katya Gotsdiner-McMahan said.

LA-based singer-songwriter Erica von Trapp brings her noir pop compositions to Frog and Peach this Sunday, Dec. 11 (10 p.m.; 21-and-older; free). She grew up singing and playing piano, but these days she employs two synths and a vintage drum machine, and she’s been compared to Bjork. Her solo debut, Back Seat Driver, will be released in 2017.