With views of vineyards and the ocean, Presqu’ile offers a pretty stunning setting, and it’s hard to beat The California Honeydrops for sheer entertainment value. Mixing R&B, funk, Southern soul, Delta blues, and New Orleans second-line sounds, the Honeydrops are an infectiously engaging dance band that will have you on your feet.

Only a band like The California Honeydrops can make a tale of a broken relationship into a feel-good party song! Fronted by terrific singer and multi-instrumentalist Lech Wierzynski, the Bay Area group got its start busking in Oakland subway stations but has since gone on to tour throughout North America, Europe, and Australia. In addition to headlining tours, they’ve opened for everyone from Bonnie Raitt and B.B. King to Allen Toussaint, Buddy Guy, and Dr. John.

Wierzynski was born in Poland and raised by Polish refugees in Washington, D.C., and adopted his vocal style from listening to Sam Cooke, Ray Charles, and Louis Armstrong. He honed his musicianship at Oberlin College and on the club circuit in Oakland. When he gets up on stage, he’s a force of nature.

“The whole point is to erase the boundaries between the crowd and us,” Wierzynski said in press materials. “We don’t make set lists. We want requests. We want crowd involvement, to make people become a part of the whole thing by dancing along, singing, picking the songs, and generally coming out of their shells.”

The band can move from accordion-driven New Orleans sounds on tracks like “Bubblegum” to a choice cover like Wilson Pickett’s “Don’t Let the Green Grass Fool You,” but I love their big anthems like the R&B song “Like You Mean It,” whose hooky chorus wails, “If you want it, go out and get it. Now if you love it, hold onto it. Don’t you keep it just because you think you need it, but if you do it, do it like you mean it.”

This is a great live band!

Also, don’t forget that The White Buffalo plays a Numbskull and Good Medicine Presents show the Fremont Theater this Thursday, June 8 (7 p.m.; all ages; $18 presale at ticketfly.com or $20 at the door). This big bear of a man writes amazing narrative songs and sings them with commitment and a booming baritone voice.

Tennessee native Dustin Lynch is undeniably on fire. He’s made his name with his first single “Cowboys and Angels” (2012), which peaked at No. 2. The track was off his eponymous debut album that reached No. 1 on the U.S. Country charts. Pretty solid work right out of the gate.

His second album, Where It’s At, reached No. 2 on the charts and yielded three No. 1 U.S. Country Airplay singles, “Where It’s At (Yep, Yep),” “Hell of a Night,” and “Mind Reader.” He’s still working on his third album, but its first single “Seein’ Red” also peaked at No. 1, and his newest single, “Small Town Boy,” hit No. 1 on the U.S. Bubbling Under Hot 100 Singles on Billboard.

“I’m a dirt road/ In the headlights/ I’m a mama’s boy/ I’m a fist fight/ Kinda county line/ Kinda cold beer/ Little hat down/ Little John Deere// I kinda give a damn/ I kinda don’t care/ You see that girl standing right there// She loves a small town boy like me/ She’s my ride or die baby/ She’s my cool, she’s my crazy/ She’s my laid back in the front seat/ She’s my with me to the end girl/ I’ll turn it up to ten girl/ She can have anybody that she wants/ She wants to be anywhere she wants to be/ She loves a small town boy like me,” he sings.

For country purists, Lynch may embody everything that’s wrong with contemporary country—over produced, Auto-Tune, with an R&B sound—but his fans love him, his sound gives him a lot of crossover appeal, and he’s heading to Vina Robles Amphitheatre next Thursday, June 15 (7:30 p.m.; all ages; $39 to $50 tickets at vinaroblesamphitheatre.com).

“‘Small Town Boy’ is about being in love with someone for who they are and what makes them unique. I grew up in the small town of Tullahoma, and that town made me who I am. It’s somewhere I long to always go back to and visit … my family is still there,” Lynch shared in press materials. “So this song reminds me of my hometown and what true love really is—that’s being in love with the real in somebody and not the fake.”

The song’s been viewed more that 6.6 million times on YouTube!

The march to Live Oak continues!

There’s only one more weekend standing between me and the Live Oak Music Festival—Friday, June 16 to Sunday, June 18—in Camp Live Oak off Highway 154 about 80 minutes south of San Luis Obispo. You can see the whole lineup, read about the festival in detail, and buy tickets at liveoakfest.org.

Two weeks ago I highlighted the excellent overall lineup, last week I told you about one of my favorites—Nick Waterhouse—who plays on June 16, and this week I’m featuring Lee Fields and the Expressions, who play on Saturday, June 17 (6:45 to 8 p.m.). 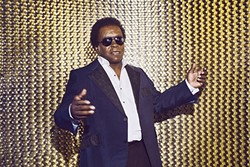 Born Elmer Fields in 1951, he recorded his first single—“Bewildered”—in 1969 and has been performing off and on ever since, playing and recording everything from funk to lo-fi blues to Southern soul. In fact, Fields is often called “Little J.B.” because of his physical and vocal resemblance to James Brown.

Recording for various small labels in the ’70s, he was a sensation with fans of hard-hitting funk, and though he never hit it really big, those early singles have become sought-after collectors’ items. After a hiatus, he returned to the stage in the ’90s belting out soul-blues numbers to largely female audiences on the Southern circuit. Meanwhile, hip-hop fans and artists became obsessed with vintage funk samples, and Fields’ raw early recordings were again in vogue.

During his career, he toured with Kool and the Gang, Hip Huggers, O.V. Wright, Darrell Banks, and Little Royal. Interestingly, his newer recordings are among the best of his career, with a phat backing band in the Expressions and a potent old-school funk sound. This is going to be an off-the-hook set by the new hardest working man in show biz!

The end of spring quarter also signals Cal Poly’s end of the year concerts, and they have a trio of worthy contenders this week starting with the Trombone Choir performing Friday, June 9, in the Performing Arts Center Pavilion (7:30 p.m.; all ages; free).

Trombone was my instrument, and I still had one until my wife sat on it—on purpose, I think—but it’s still the loopy uncle of the brass world, which makes it a ton of fun to listen to.

According to the music department, “The ensemble will showcase the power and tenderness of the trombone. The program will feature music spanning a variety of eras and styles including works by J.S. Bach, Richard Wagner, and Gordon Jacob.”

“The concert will begin with two small-scale works: Paul Dukas’ ‘Fanfare to precede “La Péri,”’ written for orchestral brass, and Richard Strauss’ ‘Serenade in E-flat Major, Op. 7,’ written for orchestral woodwinds. After a brief intermission, the full orchestra will assemble to perform Hector Berlioz’ ‘Symphonie Fantastique,’ which has been called ‘the most remarkable First Symphony ever written,’” organizers said.

Then on Sunday, June 11, head to the Performing Arts Center as The Cal Poly choirs will celebrate Thomas and Susan Davies at a spring concert titled “With Thanks to All” (2 p.m.; all ages; $12 and $14 general admission, and $9 and $12 for students, available at 756-4849). The couple and longtime music department members are retiring after 34 years! Expect music from Cal Poly’s Early Music Ensemble, European Tour Choir, and an 80-voice combined choir. All have been members of PolyPhonics and/or the University Singers in recent quarters. An 85-voice alumni choir will also perform. 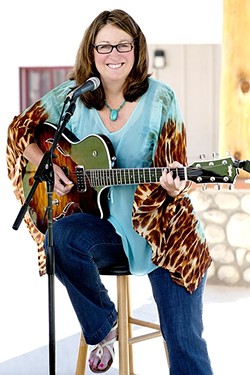 Singer-songwriter Sandii Castleberry will bring her blues, roots, country, and country rock sounds to two shows this week, starting on Thursday, June 8, in Creeky Tiki (7 to 9 p.m.; all ages; free); and on Wednesday, June 14, in Frog and Peach (10 p.m. to midnight; 21-and-older; free).

This just in! Get your grrl power on this Friday, June 9 (9 p.m.; 21-and-older), when Oregon’s Skating Polly (featuring members of Veruca Salt), Austin’s Gal Pals, and our own Hot Tina descend on Sweet Springs Saloon for a night of kick-ass rock ’n’ roll, Wonder Woman style! Skating Polly and Gal Pals are hot off a two-month tour, so they’ll be finely honed rock machines!

Jazz and standards vocalist Judy Philbin presents “It’s All About the Journey,” songs of travel and inviting destinations, on Sunday, June 11, in SLO’s Unity Church (2 p.m.; all ages; $15). Hear “Caravan,” “Foggy Day in London Town,” “Autumn in New York,” “California Dreaming,” “Sentimental Journey,” and many more! She’ll be accompanied by the In Time Trio and members of the Human Nation band. Call 543-4250 for reservations. 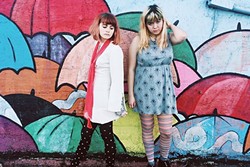 It’s outdoor summer concert season, and this Thursday, June 8, you can hear the soul, funk, R&B, and NOLA sounds of Burning James & the Funky Flames in Paso’s Summer Concerts in the Park (6 p.m.; all ages; free). This is a great dance band!

The 22nd annual Concerts in the Plaza series starts this Friday, June 9, with electronica act Tropo (5 p.m.; all ages; free). These festival favorites create live instrument electronic music that will have you trancing out!

Down in Arroyo Grande on the Rotary Bandstand in Heritage Square Park, hear the CaliCubano sounds of the Zongo All-Stars during the Village Summer Concert series on Sunday, June 11 (1 p.m.; all ages; free). Voted Best Local Band for two years in a row, these guys bring the party!

David Provenzano of the amazing local pop quartet Fialta will release a new solo track this Friday, June 9, under the name Margot Polo, and I got a sneak peak at the sunny, lush, breezy, hooky, wonderfully infectious new track called “Sweet California.”

“Fusing a range of pop/R&B influences from the ’90s and early 2000s, I’m aiming for a nostalgic yet modern pop sound that channels Justin Timberlake, Washed Out, JR JR, and Vampire Weekend,” Provenzano said.

He nails it! Cool synth sounds, whistling, and then the wall of sound chorus: “I’m coming for you, sweet California, those sands of summer and your golden ways. Unpack your heartache, let’s get cathartic in this place, in this place.”

You can preview and purchase the track on Friday by visiting margotpolo.bandcamp.com. You’re going to be blaring this one with the top down as you’re cruising the 101!