Welcome to the family

Owned by local siblings and run primarily by Julian Contreras, Kin Coffee Bar is a traditional coffee shop in that it serves as a community hub for ideas, conversation, and of course, coffee. Kin's menu includes coffee drinks, super food lattes, matcha drinks, and signature drinks, as well as fresh bakery items from Buttercup Bakery and Cafe in Morro Bay. Kin Coffee Bar is open daily from 6:30 a.m. to a flexible 7 p.m. (Thursdays until 9 p.m.) at 847 Higuera St., SLO, next to The Gallant Barber Shop. Call (805) 439-4136 for more info or visit them on Facebook or Instagram. Check out the latest on Facebook.

We all have our morning ritual. So many of us gravitate toward the social ritual of stopping at the local coffee shop. You probably already are attached to one particular café. Your fabulous barista knows you by first name and can easily name your top five idiosyncrasies. You tend to order the same drink with different variations. That beautiful, human bond is probably your favorite part of the day.

Now some of you who live and work in SLO have discovered Kin Coffee Bar on Higuera, and you're torn. After all, Kin totally gets what you've always yearned for: coffee and connection. It never tried to steal you away from your ritual spot, but sometimes ... change is a good thing.

"We didn't open up and have everything done," said Kin's owner Julian Contreras, who considers his coffee bar in its infancy phase. 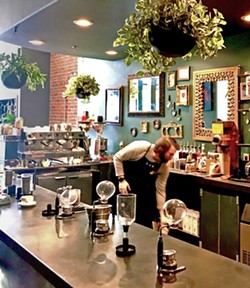 His attitude is all about keeping things fluid and current. He's earnestly open to ideas. People who came in when he first opened in August 2019 are seeing the developments in situ, and finding that Julian is grooving to what the community asks for—from bringing in vintage furniture piece by piece to adding new syrups like Earl Grey to the menu.

"We're growing with the community," he said.

I trust that he and his small staff of three know what they're doing. Julian was born and raised in SLO, and that helps. An acoustic guitar leans against an antique Thrifty Ice Cream parlor stool, foreshadowing the evening to come, as local musicians often come by to pair up and jam something alternative and mellow.

To try to define the place is like standing still in a bubbling river, but here goes: As you walk in, their baristas will be siphoning brews from antique, hand-blown glass relics; doing pour overs; scooping from colorful medicine jars; working their French press magic. These old-school coffee laboratory techniques will make you feel like you've taken a time machine back to forgotten centuries in Germany, Turkey, or Japan.

These are instruments that have been used since the 1800s, and using them is what Julian finds fascinating in his quest to make you the perfect cup of coffee or most soothing latte. 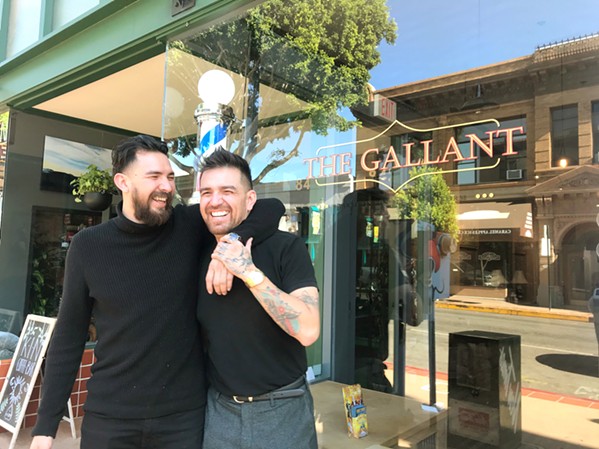 Julian opened Kin with the help of his siblings. Just as warming as the drinks at Kin are the brothers behind it. The place is named after the word their mother has always used for uncles and cousins, and the brothers call each other "kin" as well as their friends.

Julian is the youngest of three brothers—co-owner and main driver of the operation. Christian is the oldest brother and co-owner, and he's also a barber, who opened up his new barber shop, The Gallant, next door at the very same time—carefully planned to guarantee a good neighbor relationship. Middle brother Diego was also involved in the construction phase of the 900-square-foot coffee bar and The Gallant.

The Contreras family equipped Julian for owning a community coffee shop at an early age. He owes his sense of community to the years he spent working at his family restaurant—the former Rodeo in Santa Margarita, which is now The Range, under different ownership. Many of his family members are from Mexico City, but Julian was born in SLO.

Julian has worked as a barista in SLO County for 13 years: Kreuzberg, Nautical Bean, Bello Mundo (now Ascendo)—you've seen him turn your foam and crema into a swan or tulip for some time now. He knows his coffee like a sommelier knows wine.

My first time there, I ordered the lavender syrup and matcha iced Amethyst, and after that, I tried the warm Butterfly Pea Superfood Latte: a Southeast Asian tea stone-milled with ginger, cinnamon, ashwagandha, maca, nutmeg, clove, and astragalus root. Many of the drinks have strong antioxidant and anti-cancer benefits, and all matcha drinks are made with almond milk unless specified. 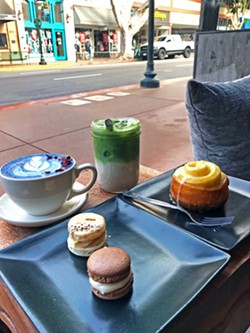 Taylor Johnson was making my drink like an apothecary healer from Charles Dickens' time.

I tried a warmed-up orange cardamom roll and two picture-perfect macarons—chocolate-vanilla and pecan praline—from Buttercup Bakery in Morro Bay while I sat in a pillowed, Morroccan-style nook with a wall-sized window that's perfect for people watching.

Julian said he opened Kin to provide a coffee bar for locals to convene in old-fashioned conversation. Respecting the origin of coffee shops—tracing back centuries in Arabia, when coffee was used as a stimulant to get through long prayer sessions, and then on to Europe, when coffee houses became the popular places for sharing political and artistic ideas—he would like his little place to be similar, more of a community hub to drink and socialize rather than a study spot.

"Back in the day, coffee shops were more inspired spaces for people to talk politics, and a lot of views were actually founded in coffee shops," Julian said. Δ

Flavor writer Beth Giuffre is unplugged and reading an antique newspaper over a siphon-brewed coffee. Send timeless tips to bgiuffre@newtimesslo.com.