It was a windy afternoon last July, and the skyline above the break at Pico Creek in San Simeon was full of kites that pulled thrill-seeking surfers at speeds of 20 to 40 knots.

One of them was Kinsley ThomasWong, a legend in the community. He was the country’s first instructor certified by the International Kiteboarding Organization, and he owned and operated an equipment store and kiteboarding school in Pismo called Xtreme Big Air. 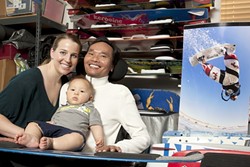 He loved the water and practically lived in it—until a sudden gust of wind lifted him high into the air and dashed him headfirst against a rocky outcropping.

“I don’t remember the accident,” Kinsley said. “I was surfing, and then I was in the hospital.”

He suffered injuries to his head and neck. He underwent a tracheotomy and is currently confined to a wheelchair and only able to move his left arm and neck. Still, this once active man doesn’t let the injury or his handicaps hamper his outlook.

“I’m always in good spirits. Always. Attitude is very important,” said Kinsley, whose broad smile advertises a magnetic personality even from the confines of a wheelchair. “I’m very lucky to get so much help from friends and family, especially Jaime [his wife]. She takes care of little Taizen and me.”

Kinsley spent two months recovering in the Santa Clara Medical Center spinal injury ward and was even there for the birth of his son. Hospital staff were so inspired by Kinsley that they made special arrangements to let him speak with his wife via webcam before the birth, and they moved him, breathing machine and all, into the delivery room so he could be present as his son came into the world.

Kingsley’s original prognosis was dire. Doctors said he might someday breathe without the machine during the day, but that he’d always need it at night. They didn’t offer much hope for him to regain muscle movement.

“They kept telling us what normal people can do after a spinal injury,” Jamie said. “But Kinsley isn’t normal. We don’t believe in limitations.”

She’s right. Kinsley was entirely off the breathing machine in only a month and a half. After extensive physical therapy (anywhere from three to six hours a day), Kinsley now has nearly his full range of movement in his neck; can move his left shoulder, elbow, and wrist; and recently regained control of his core trunk area.

“It will take some time, but I keep moving on every day,” Kinsley said. “I will get back to surfing and running, back to the good old days.”

Most of Kinsley’s expenses were covered by insurance, but the cost of his wheelchair ($30,000), much of his physical therapy, and an at-home caregiver aren’t. Between therapy sessions, dealing with insurance paperwork, and researching spinal cord injuries, neither Kinsley nor Jamie is able to work more than one or two hours a day, managing their business, Xtreme Big Air, from home as best as they can.

Support from the worldwide extreme sports communities has already netted the family $62,000, and Marina Chang, a local publisher of The Kiteboarder Magazine, hopes a series of three fundraisers she’s organizing will close the gap.

On April 15, all proceeds from one of the annual Taste of Pismo events at Dinosaur Caves from 5 to 8 p.m. will benefit the ThomasWongs. Tickets cost $30.

April 22 to 24, the Pismo Beach Kite and SUP Expo kicks off for three days of fun and product demos on the beach. All money raised will benefit Kinsley.

Tickets are available now for a separate raffle and a prize of four cases of wine. They cost $20 each or three for $50. To donate wine to the cause, drop off your bottles at Vintage 1255 at 1255 Monterey St. in San Luis Obispo. The drawing will be held at the Kite Expo on April 24. The winner need not be present. Contact Marina Chang at 459-2373 for more information.