I’ll admit it: I’ve been sort of hard on the Mid-State Fair’s entertainment in the past. The fair’s got the biggest venue in the county—the grandstand can seat something like 12,000 people—so it always seemed like something of a waste to trot out some of the tired old acts they’ve had over the years. This season, however, things are looking up.

My two biggest recommendations are for Kiss and The Black Eyed Peas, but I’m getting ahead of myself, so let’s begin at the beginning.

On Thursday, July 23, ’70s and ’80s rock fans can relive the heady days of prog-rock-cum-hard-pop act Journey, singing along to songs such as “Wheels in the Sky,” “Anyway You Want It,” and “Don’t Stop Believin’.” Journey shares the bill with popular sister act Heart, featuring Ann and Nancy Wilson, who enjoyed hits with such songs as “Barracuda,” “Dog and the Butterfly,” and “What About Love.” Sure, their best days seem to be behind these two acts, but these are storied performers so entrenched in rock history that they’re both acts worth seeing. You can also catch the always fun Eddie Money on the Frontier Stage, and Bucket Busters and Monte Mills (who’s releasing two new albums!) on the Headliner Stage.

On Friday, July 24, American Idol winner Kelly Clarkson plays the grandstand with opening act The Jane Carrey Band. Clarkson recently released her fourth album, All I Ever Wanted, and even though I don’t “get” American Idol or Clarkson, I know she’s got a huge fan base. Isaac Russell plays the Frontier Stage, and the DPAC Dancers, Class Act Dancers, and Blimp Pilots appear on the Headliner Stage.

On Saturday, July 25, more ancient rock awaits, this time with Styx and REO Speedwagon. As a band, Styx is only 46 years old, a whole year younger than the Rolling Stones. “Come Sail Away,” “Fooling Yourself (the Angry Young Man),” “Mr. Roboto,” and “Lady” were among their biggest hits. By comparison, the 41-year-old REO Speedwagon is a young pup. “Keep on Lovin’ You,” “Take It on the Run,” “Don’t Let Him Go,” “In Your Letter,” and “Can’t Fight this Feeling” are their big hits. The Chicago Tribute Authority plays the Frontier Stage, and Coastal Dance/ Music Academy, CC Dance, and the Jerome Washington Express are on the Headliner Stage.

On Sunday, July 26, you can get your country on with Tim McGraw and opening act Whitney Duncan. The “Live Like You Were Dying” singer has turned to acting in recent years, and his career is still ascending. Natalie Grant hits the Frontier Stage that night, and see PR Youth Arts Foundation, Academy of Dance, and Rusted Stone on the Headliner Stage. Urban 805, one of the great unsung urban jazz acts, plays the new Mission Square Wine Plaza.

On Monday, July 27, the kiddies and tweens will be all atwitter when Nat & Alex Wolf and supporting act Tiffany Giardina play the Grandstand. The Nickelodeon television stars and brothers are founding members of the Naked Brothers Band, and their performance is part of the fair’s Kids’ Day celebration. Nat & Alex’s hits include “Crazy Car,” “If That’s Not Love,” “L.A.,” and “Yes We Can.” Lady Antebellum plays the Frontier Stage, and Singing Hands, Dancers of Amara, and the Sugar Daddy Swing Kings appear on the Headliner Stage. Urban 805 returns to the Mission Square Wine Plaza. 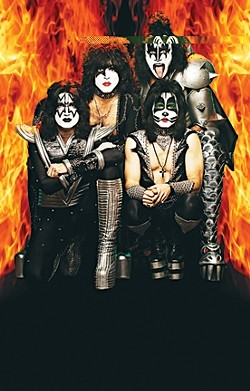 Then on Tuesday, July 28, the greatest theatrical, costumed glitter-rock act ever, Kiss, will run through its hits, including “Rock and Roll All Nite,” “Beth,” and “I Was Made for Loving You.” My special prayer is that every single audience member wears makeup fashioned after his or her favorite band member. That’d be awesome! Super-cool Nico Vega opens this show. Neil Diamond tribute act Super Diamond plays the Frontier Stage, and American Karate will offer demonstrations and Rancho Deluxe will play the Headliner Stage.

On Wednesday, July 29, aging heavy metal fans can head-bang a kink into their necks when Judas Priest plays the grandstand with Whitesnake opening. Judas Priest, formed in Birmingham, England, back in 1969, was a leather-clad force to be reckoned with. They managed to make Joan Baez’s song “Diamonds and Rust” into a metal anthem; that’s how awesome they were. Whitesnake, another British metal act, ushered in the hair band era. Frequently the subject of ridicule as a Robert Plant/Led Zeppelin rip-off, rumors abounded that lead singer David Coverdale was the basis of David St. Hubbins of the metal parody act Spinal Tap, but in truth Coverdale has some rock cred, having been a member of Deep Purple from 1973 to ’76. The pop metal anthem “Here I Go Again” was the band’s biggest hit. Reggae fans will be able to see The Wailers that night on the Frontier Stage, and animal fans will see Zoo to You and country fans will see The Stealin’ Hearts Band on the Headliner Stage. 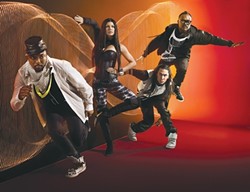 On Thursday, July 30, hip-hop fans can soak up the incredible sounds of Grammy Award-winning The Black Eyed Peas, arguably the biggest act to play the fair this year. Members of this global tour de force have all enjoyed successful solo projects, but the sum of their parts still rules the hip-hop world. Cross Canadian Ragweed will be on the Frontier Stage that night, and Zoo to You returns and rock act Project 41 plays the Headliner Stage.

For a complete listing of fair entertainment, visit midstatefair.com, where you can also purchase tickets online.

Downtown Brew is clearly stepping up its game this week to compete with the Mid-State Fair, bringing in heavy hitter Bone Thugs-n-Harmony, but before we get to them, don’t forget on Thursday, July 23 you can witness the return of Emery (5:30 p.m.; all-ages; $15 presale or $17 at the door). As I mentioned last week, this post-hardcore band’s newest album is In Shallow Seas We Sail, which according to the band “continues on musically where [we] left off with [our] While Broken Hearts Prevail EP.” Since forming in 2000, Emery has been at the forefront of the screamo movement. Later than night the club will be spinning reggae records.

On Friday, July 24, Downtown Brew has CaliCubano juggernauts the Zongo All Stars playing a super cheap 7:30 p.m., $5 show (21 and older) with opening act Funk N Public. But wait a cotton pickin’ minute! Zongo’s going to whet your whistle with a free two-hour set at Concerts in the Plaza from 5:30 to 7:30 p.m., then their horns and percussion will lead a parade to Downtown Brew, where Funk N Public opens the show, followed by another set by Zongo. That’s commitment! 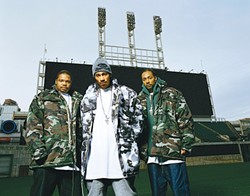 Then on Saturday, July 25, the Brew is pulling out all the stops with hip-hop kingpins Bone Thugs-N-Harmony (8 p.m.; 21 and older; $34 presale or $36 at the door). Local hip-hop collective Public Defendaz will open the show. This Ohio-bred rap group won a Grammy Award in 1997 for their track “Tha Crossroads,” and they’re considered one of the all-time bestselling rap groups with more than 50 million units moved. That’s more than Snoop Dogg, dog!

Naomi & The Courteous Rudeboys play Sweet Springs Saloon on Friday, July 24 at 9 p.m. The Santa Cruz-based funk, reggae, and soul act has opened up for such legends as Taj Mahal and Lee Scratch Perry.

You can see three great folk artists—Teresa Tudury, Rebecca Troon, and Randall Lamp—on Sunday, July 26 at 4 p.m. during an intimate Los Osos house concert. Call 528-6557 for reservations ($20).Pianist Terry Trotter and his trio are next to play the Famous Jazz Artist Series at the Hamlet in Cambria on Sunday, July 26. Trotter has accompanied stars such as Chet Baker, Joe Pass, Lena Horne, and most recently Natalie Cole. He’ll be joined by one of the West Coast’s most in-demand rhythm sections: bassist Chuck Berghoffer and drummer Steve Schaeffer. Series co-producers Charlie and Sandi Shoemake will also be on hand. There’s a $15 4 p.m. show, a $12 7:15 p.m. show, or see both for $20 (927-0567).

“Am I enough yet? My mind’s a coffee cup and my soul’s a cigarette,” sings Kathleen Grace. According to press materials, this amazing vocalist “fuses the harmonic beauty of jazz with the lyrical power of Leonard Cohen and Joni Mitchell. Blessed with a sound as pure as a bell ringing, her storytelling captivates her audience whether she is singing an American classic or an award-winning original.” See her Tuesday, July 28 at 8 p.m. in the Steynberg Gallery. Tickets are $10 (547-0278).

Glen Starkey doesn’t tell big lies because he knows small ones are just as effective. Give as good as you get at gstarkey@newtimesslo.com.

DJ Andy Smith—Digging in the BGP Vaults
We owe a tribute to the Brits for honoring our musical heritage more than we have. The electric style and attitude of such blues masters as Muddy Waters and Howlin’ Wolf were picked clean for the British Invasion of the ’60s. In the ’80s, UK label Ace Records launched their jazz-funk reissue outlet BGP (Beat Goes Public). Resurrecting forgotten American foot-stomping soul and the Hammond B3-grooved jazz for a new generation of clubbers, BGP reissued the old music that was been picked apart by hip-hop producers and fueled the Acid Jazz scene. Suddenly, Pucho and the Soul Brothers became as familiar as Brand New Heavies or Jamiroquai. Best known as Portishead’s touring DJ, Andy Smith follows his previous dig in BGP’s archive of Northern Soul by delving into their tremendous funk library, compiling and mixing a continuous blend of classic breaks and dance floor fillers. Accented with flashes of his DJ mastery, you get twenty-four slabs of heavyweight funk from Funk Inc., Dyke & The Blazers, Rufus Thomas, and deep talent that you’ll want to further investigate. Sensational!

Françoiz Breut—A L’Aveuglette
French chanteuse Francoiz Breut simmers in a sensual heat on her fourth album release, A L’Aveuglette. Maybe the seduction is simple; exotic French vocals weave over orchestrations that tip more toward a smoky melancholy than chipper humor, easily capturing a romanticism of tragic beauty. Understanding Françoiz Breut’s purely French lyrics isn’t necessary: The mood she builds captures listeners. Musically, Francoiz Breut navigates the same channels as the Tindersticks or a less mournful Nick Cave. “Dunkerque” resembles the somber blues arrangements of Cave’s Bad Seeds. The layered strings and horns of  “Les Jeunes Pousses” is a majestic sunny display of baroque pop, and the menacing rumbling guitar riff of “Nébuleux Bonhomme” is the only surge of true energy. The rest of A L’Aveuglette feels insulated in the dark recesses of subterranean jazz lounge, engulfing you with its mysterious twilight tenor.